This is a classic fave of mine, modified to be fodmap-friendly.  Wha?  FODMAPs… they’re a category of foods that can produce some nasty side effects in the gut for some.  Sadly for me, I’m having to cut them out for a bit, while I get back on track to having a happy belly.  (I’m writing a whole post about it… it’ll help explain!)  If you are in the need to heal some gut issues too, whether bloating, discomfort, or something more serious, then this recipe’s perfect for you!  If you aren’t, then it’s still perfect ’cause it’s a super tasty recipe no matter what your diet needs.  The main modification is omitting onion… so if you are dying for more onion in your life, just dice some up and add them in… I personally found this delicious and wonderful without.  🙂 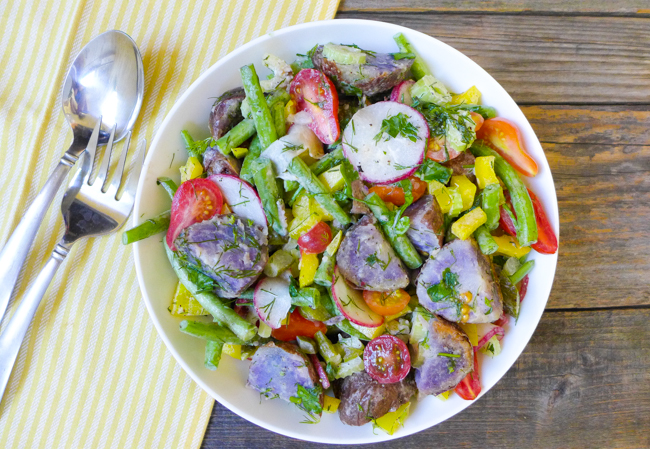 I used to make this recipe a lot as a grilled potato and corn salad.  I’d boil up the potatoes and then finish them on the grill.  It’s fun and makes them pretty.  Roasting them though is not only easier, but it creates a great flavor, too.  I’m not doing corn these days, so that’s out, but I’ve added in tons of great veggies instead.  Not only is it colorful, but it’s a healthy take on a classic summer salad.  🙂 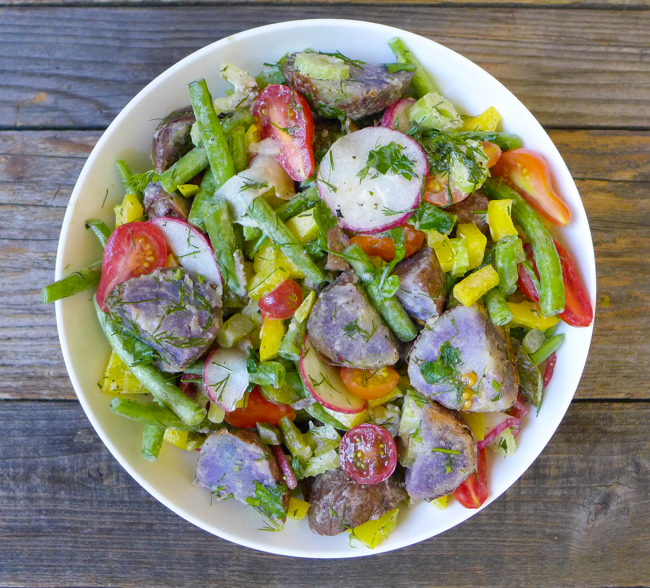 I make my own mayo… if you have an immersion blender, it’s literally the easiest thing ever.  (Recipe HERE.)  I usually use avocado oil- I like it ’cause it’s flavorless and clear.  (Note: avos are considered a high fodmap food, so should be avoided or eaten in moderation for those with sensitivities, however, avocado oil is said to be okay.  If desired, mayo with light olive could be used, as it’s safe for fodmap-friendly eating.)  Any mayo will do, as long as you like it.  I only added one tablespoon for this whole batch- I don’t like my potato salads totally smothered- I wanted this salad light and crunchy.  But by all means, if you’d like it more creamy, just add some more in!  Rather than mustard, which is also tasty in tater salads, I opted for some apple cider vinegar instead.  It’s simple and healthy… two good things in my book.  Plus, it creates the same flavor that using mustard does- it’s all about that acidity.  🙂 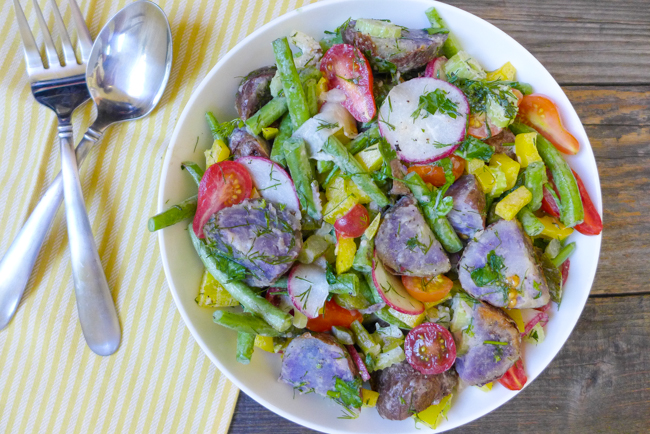 This is a great make-ahead dish to bring to potlucks and BBQs, or can be a great lunch or dinner side at home.  I love it all times of day, honestly.  😉 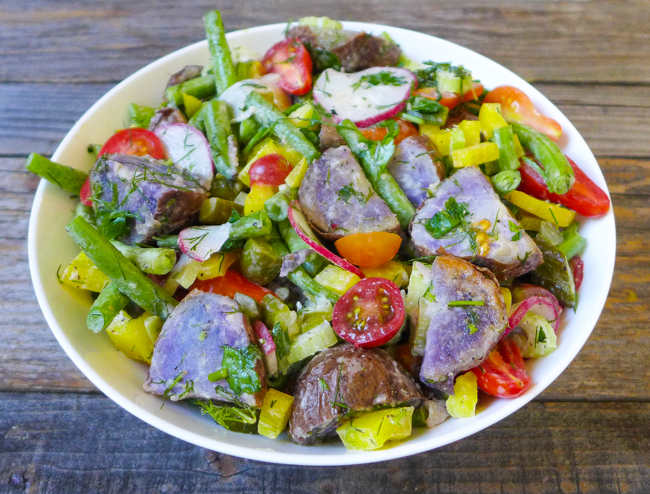 1/4 cup dill pickles (without garlic for low fodmap- or make your own garlic-free dills!) 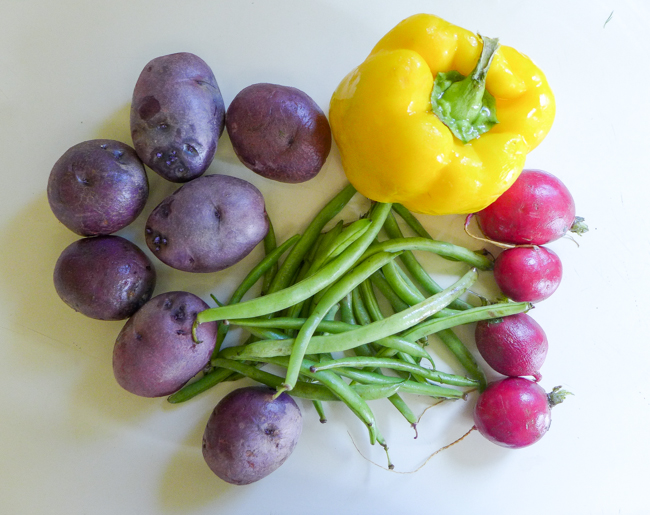 Cut potatoes in half

(Aren’t they beautiful… reminds me of agate 🙂 ) 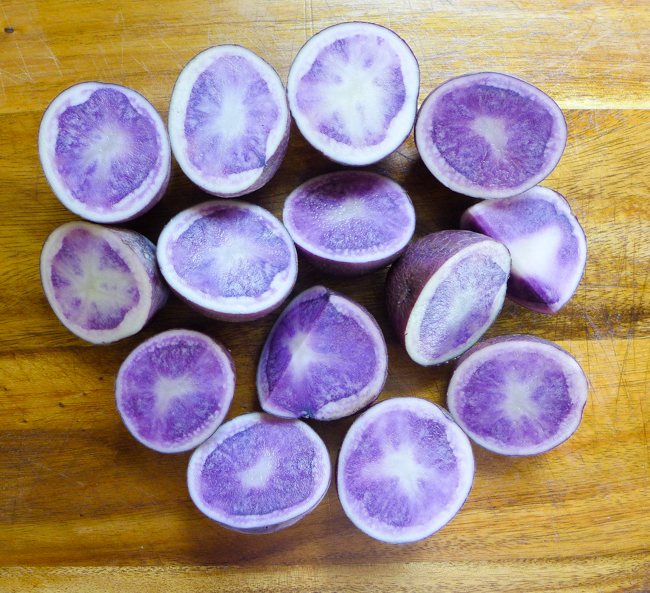 Toss the potatoes in a large baking dish with olive oil, salt, and pepper

Stir ’em around until evenly coated 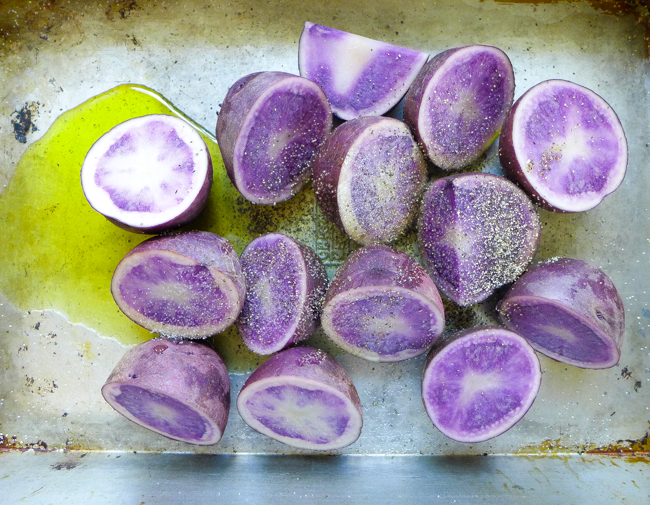 Roast for about 20 minutes, stirring half way through, until completely cooked through 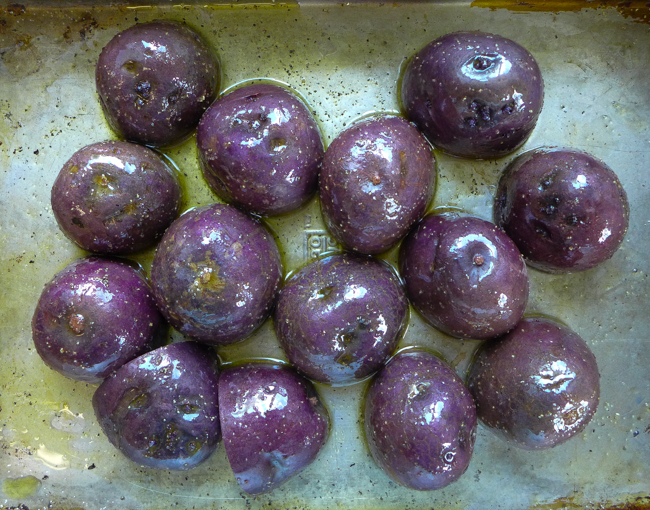 While the taters are cooking, prep the remaining ingredients…

Rinse green beans and slice the stems off 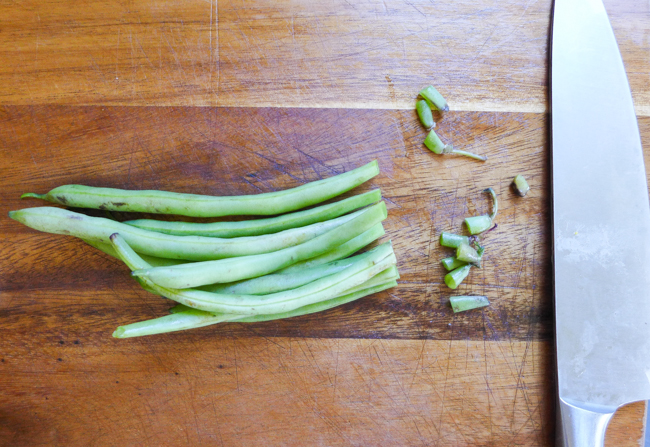 Cut beans in half or thirds, depending on size preference 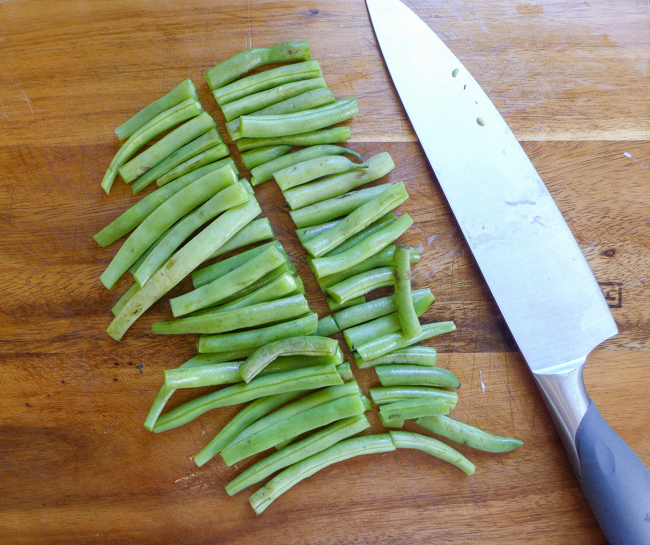 Dice the bell pepper and chop parsley and dill 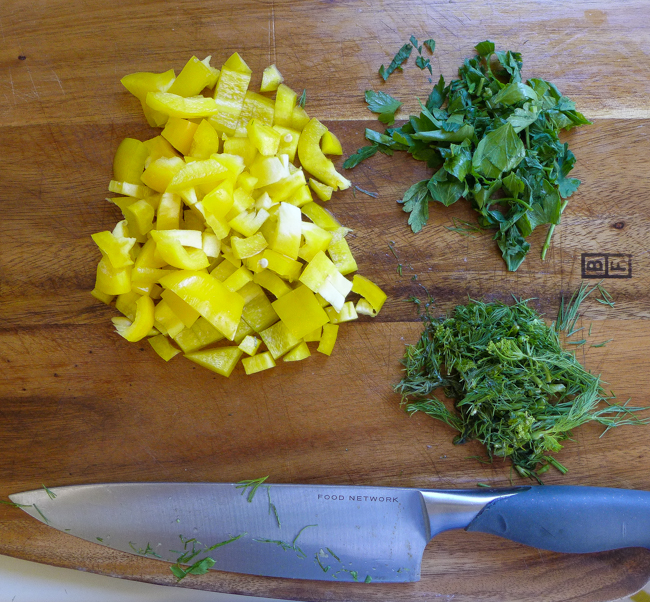 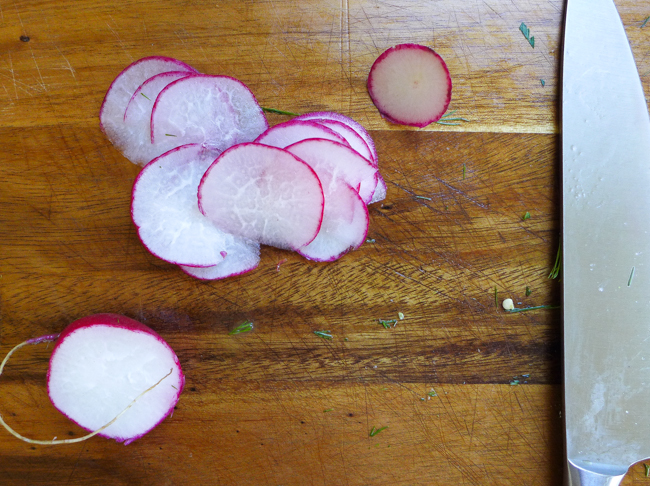 Toss the beans, peppers, radishes, and herbs into a large mixing bowl 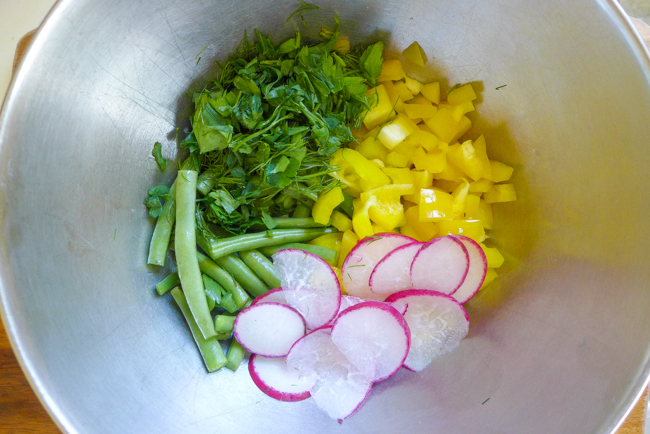 By now, potatoes should be about done… 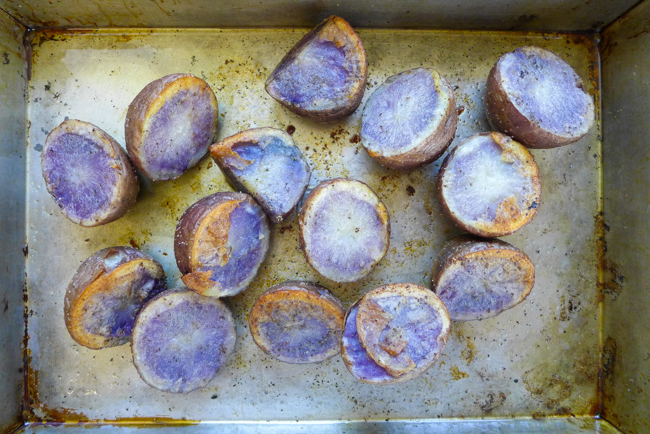 Slice the roasted taters in half 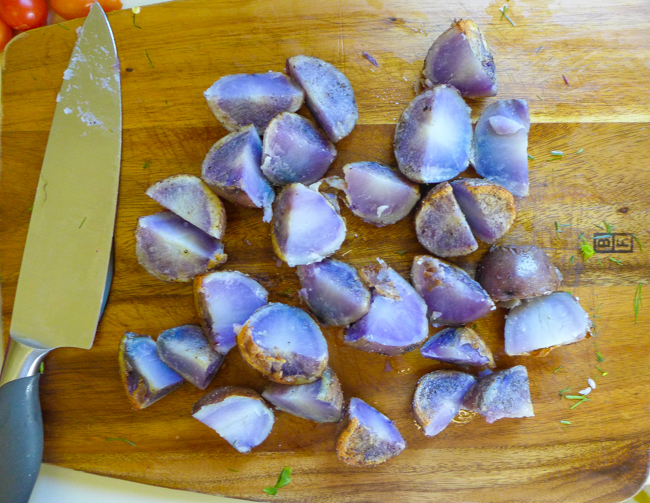 Toss them into the bowl with veggies and herbs 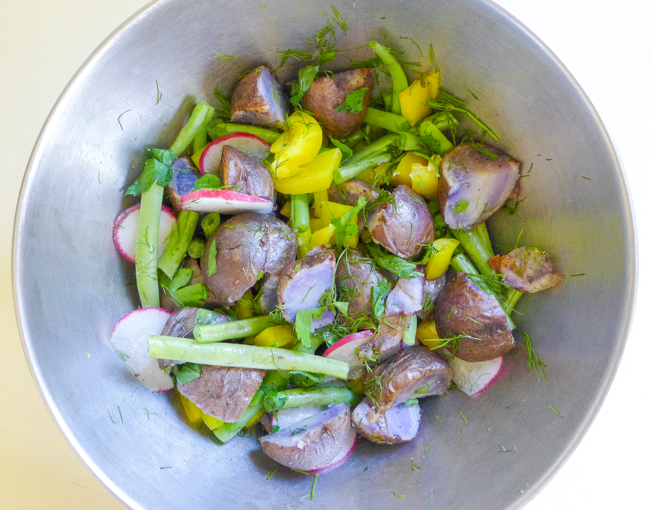 (mustard and mayo are common in potato salads,

but the same effect can be created by using apple cider vinegar!) 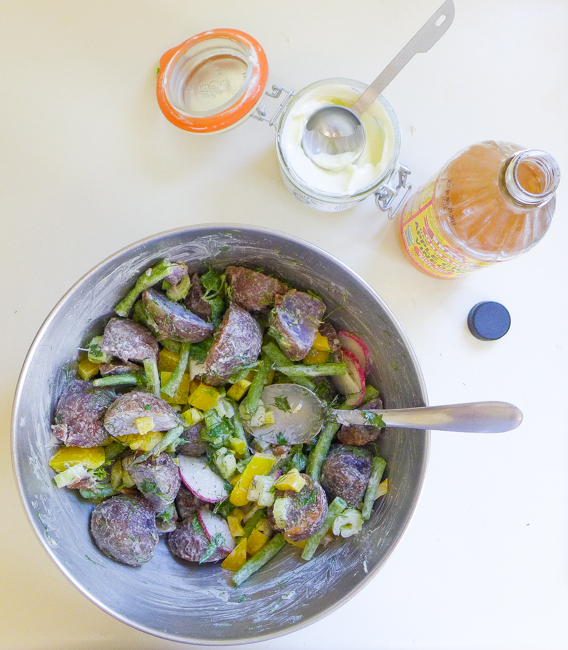 Halve the tomatoes, dice the pickle, and slice the celery, if using 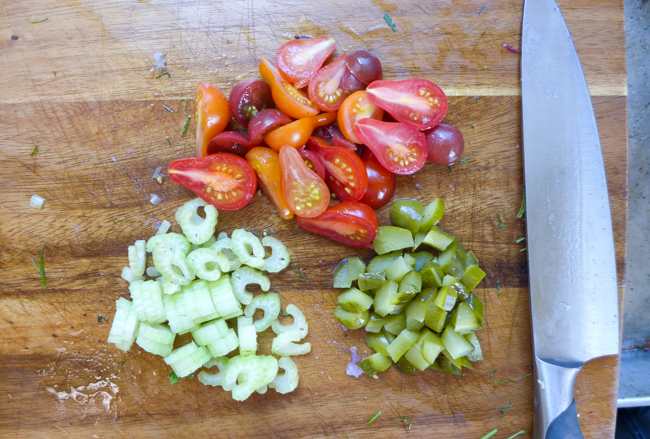 Fold then into the salad 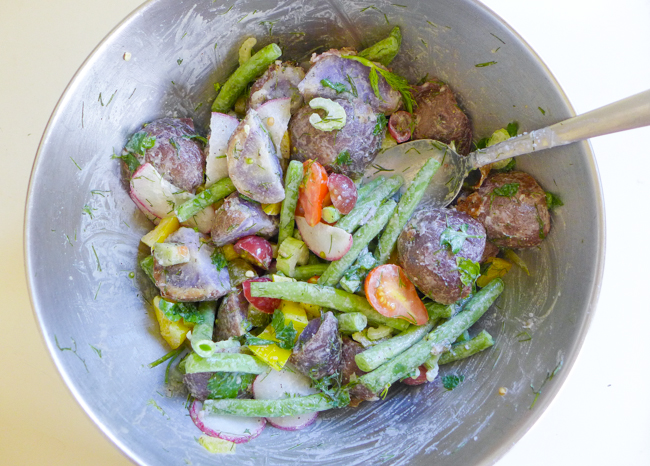 Serve up, gobble, and enjoy! 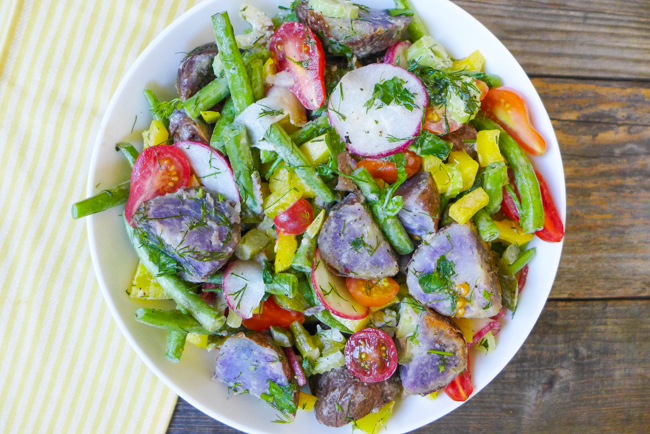