One of my favorite soups in the world to make is pozole… a Mexican hominy-based soup with pork or chicken.  My rendition usually entails some combination of shredded chicken, loads of chiles, tomatoes, and hominy.  It’s a household fave- I make it at the beginning of fall and don’t stop until spring.  I’ve even made it green (check it out HERE).  This soup though, while totally inspired by my chicken pozole, simply can’t be called a pozole ’cause there’s no hominy in there, but it’s still got the Latin-style earthy goodness I love.  I made this version low FODMAP-friendly, specifically to offer an alternative for people who follow a low FODMAP diet (people who have gut sensitivities often can’t eat things like onion, garlic, grains, and so forth, so having FODMAP-friendly options is a real must for some), but that doesn’t mean only FODMAP peops will enjoy it.  My man has no need for such restrictions, but loved this just as much as he’s loved any other Mexican-style soup I’ve made. You really can’t even tell it’s lacking onions and garlic… hard to believe, I know.  That’s because there’s so much flavor packed in with chiles galore… and a load of veggies, too.  It’s a fusion-style hodgepodge of vegetable-chicken goodness. 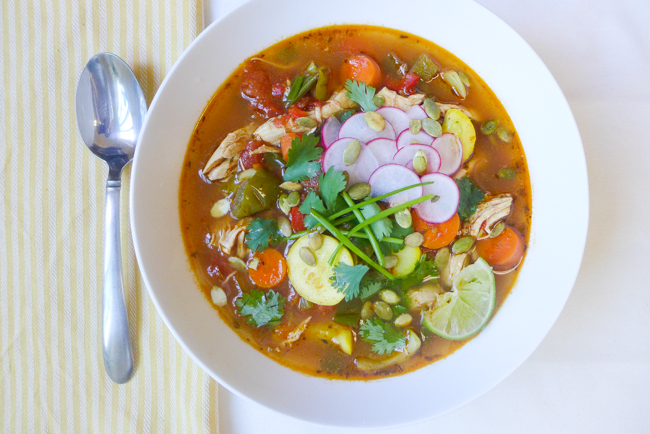 I used poblanos (which you may be referred to as pasillas where you live), serranos, jalapenos, and red bells.  This soup is loaded with pepper power.  And because I’m a huge fan of fusion and adding in extra oomph, I tossed in an assortment of veggies in too- not only to boost flavor, but to add some extra texture and nutrition, too.  Double bonus.  With no hominy in there, the soup needed some heartiness- these veggies totally do the trick.  Why bok choy?  While it’s not the most flavorful vegetable in the world, I’ve found the texture of the stems mimic the texture of onion… which I love.  In case you wondering about that ingredient addition… 😉 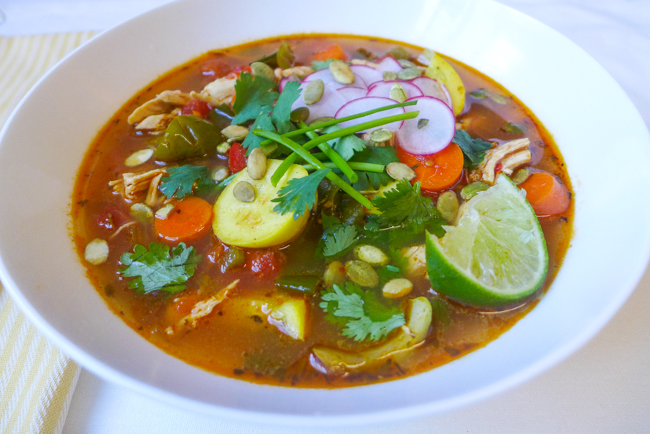 As anyone who knows me well knows, I’m a sucker for garnishes… so naturally, this soup has a handful of ’em.  Toasted pepitas (pumpkin seeds), radishes so thinly sliced they’re almost translucent, fresh cilantro, lime, and chives… all the goods.  If you can have dairy, add some crema, sour cream, or Greek yogurt in there, too. 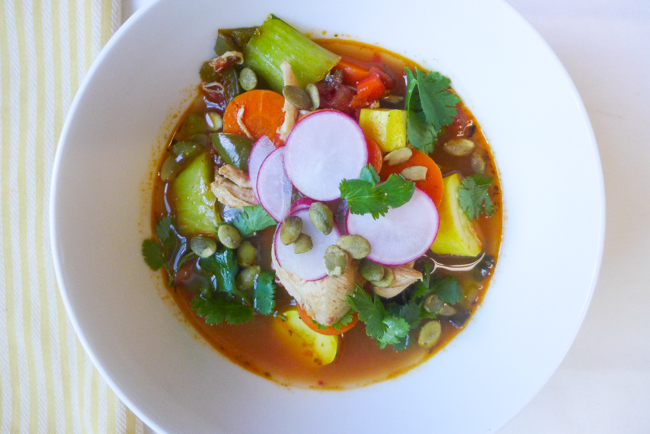 That’s pretty much it.  A Mexi-style soup, totally inspired by pozole, made completely different than any standard Mexi soup out there.  That’s the way I like things… full of whatever goodies I happen to have on hand.  And nutrition, of course.  😉

This batch will make enough for about 6… so we had leftovers, which I was totally thrilled with by the way.  The pics on top were din din, these couple of pics here were lunch the next day.  As with most soups, I swear it gets better the longer it sits. 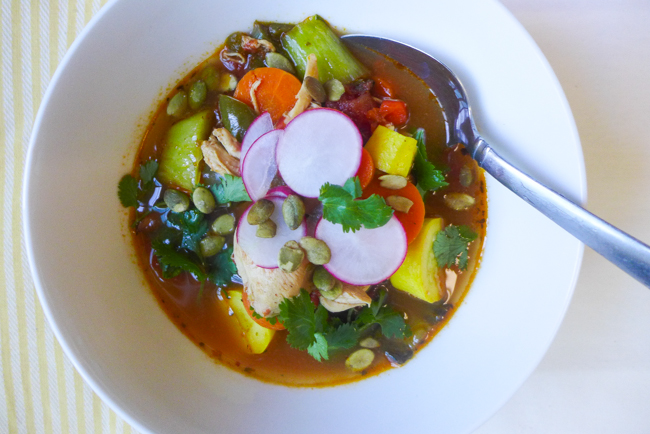 *for low FODMAP, homemade is broth ideal so it can be made without onion and garlic (I’ll be posting a recipe for a homemade FODMAP-free version later this week!)

**if your body likes dairy, toss on some crema, sour cream, or Greek yogurt on the top, too! 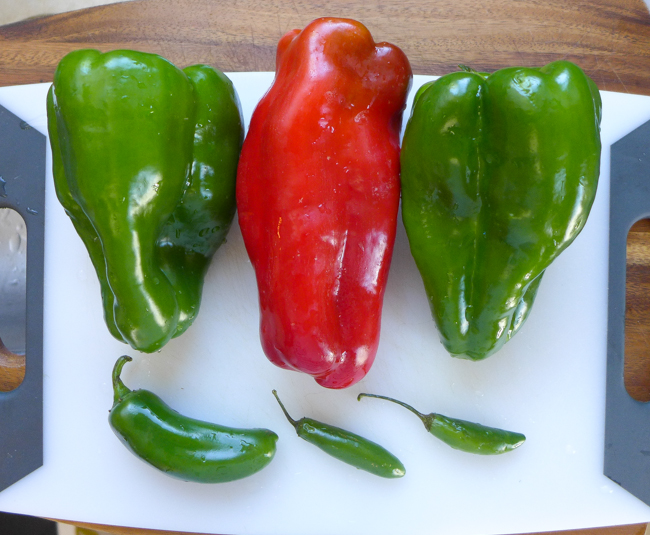 Slice each chile pepper in half (serrano and jalapeno), then remove all seeds

(the seeds carry the heat, so this helps add the pepper flavor without making it unbearably spicy 😉 ) 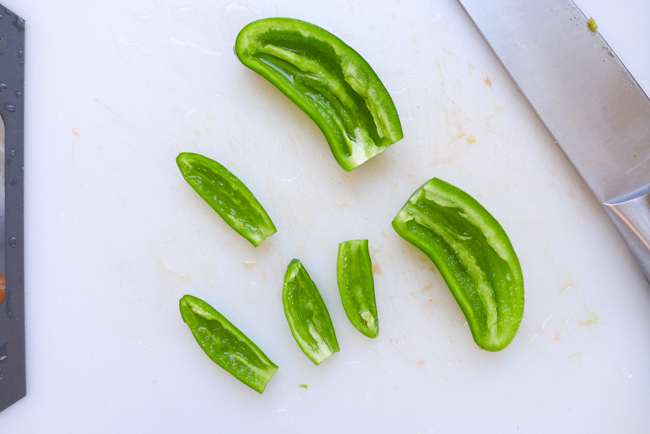 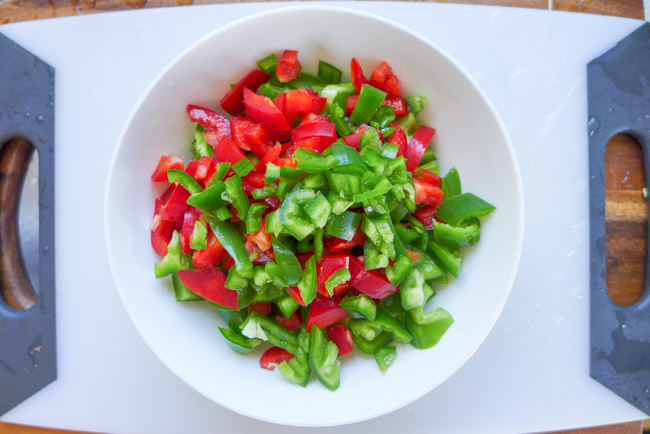 Heat olive oil in a large pot over medium heat 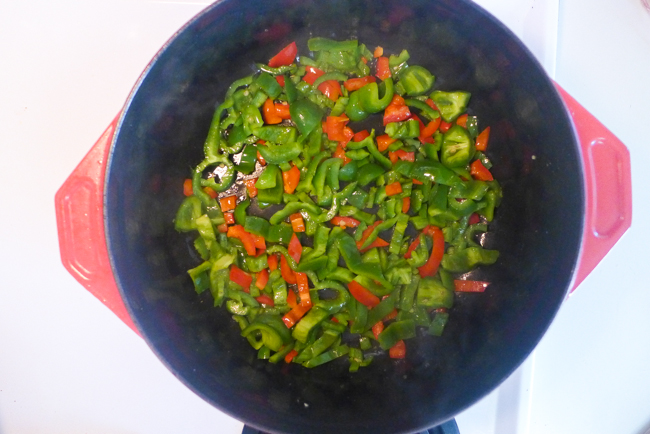 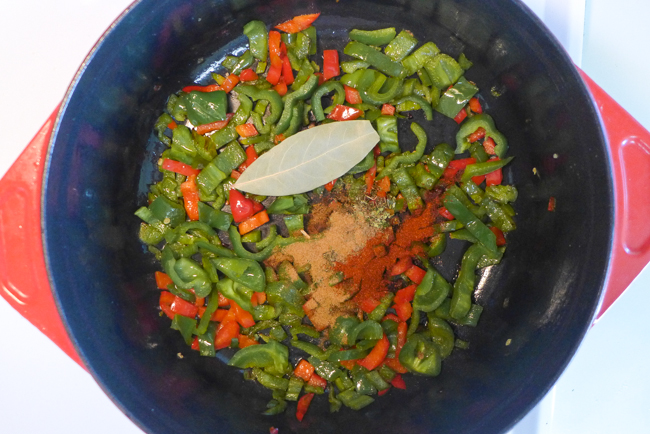 Chop tomatoes and add to the pot 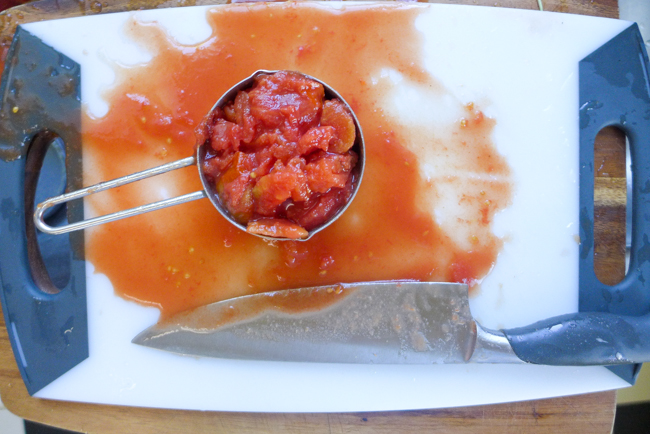 Add the chicken breasts, submerging them completely in the broth

Cover and let cook for about 45 minutes

(should be a just below a boil- reduce heat if needed) 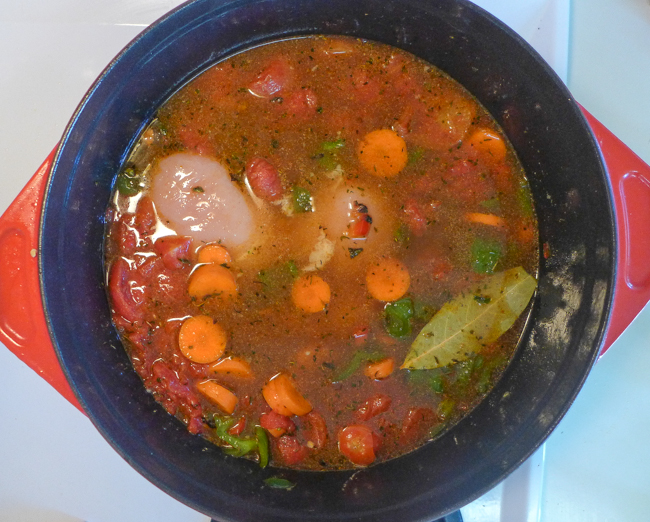 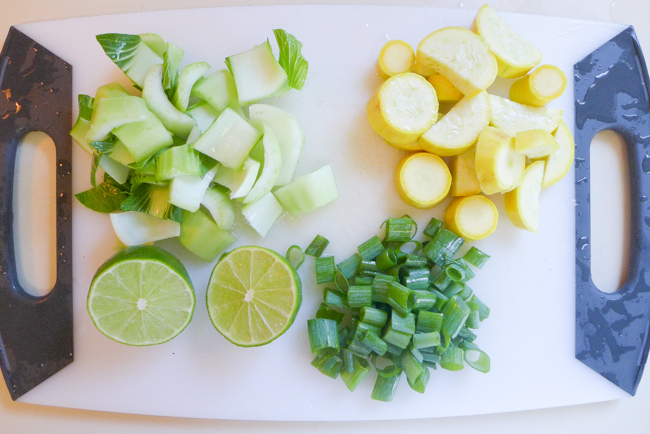 Shred with forks or fingers 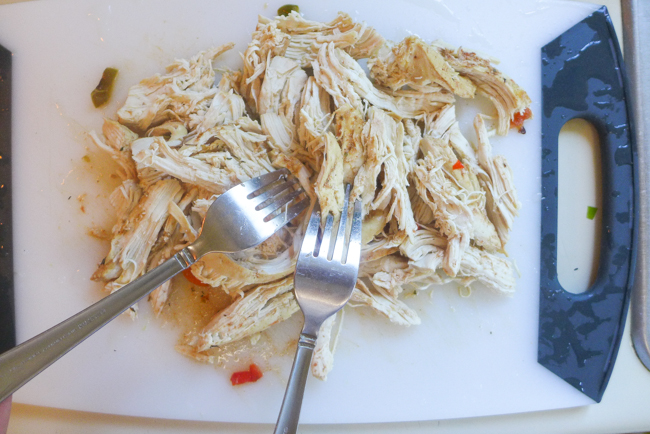 along with the shredded chicken 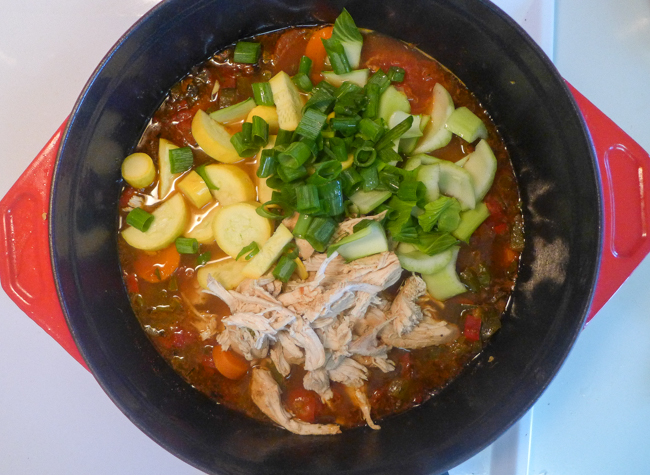 Lower heat and let the soup simmer for about 10 minutes 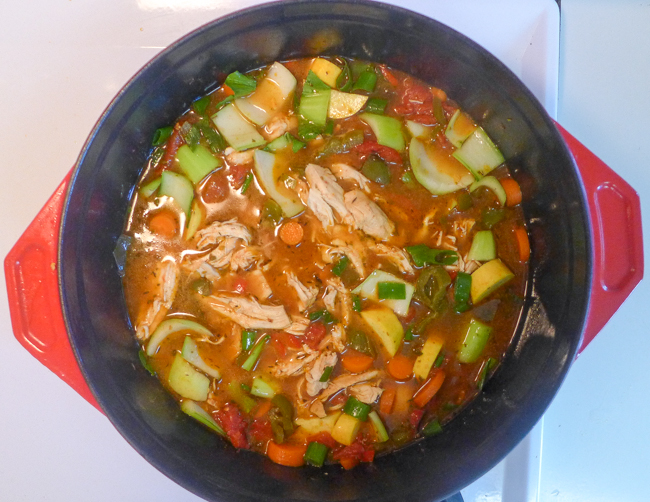 Get your garnishes ready… 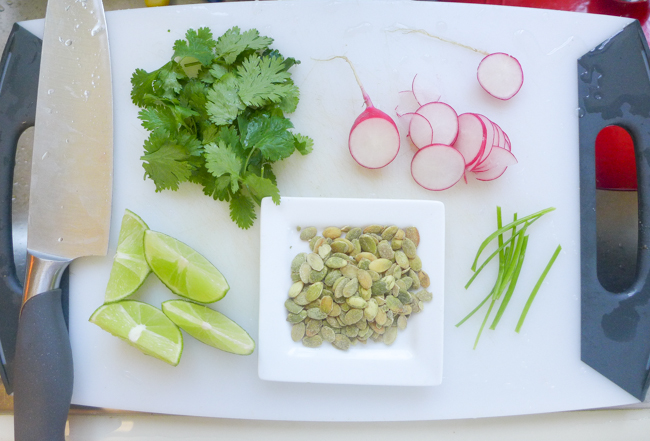 Taste and adjust soup as desired

To serve, ladle into bowls, then top with desired garnishes 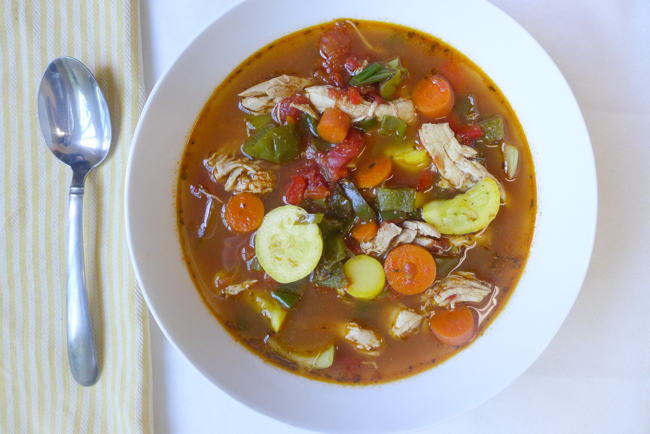 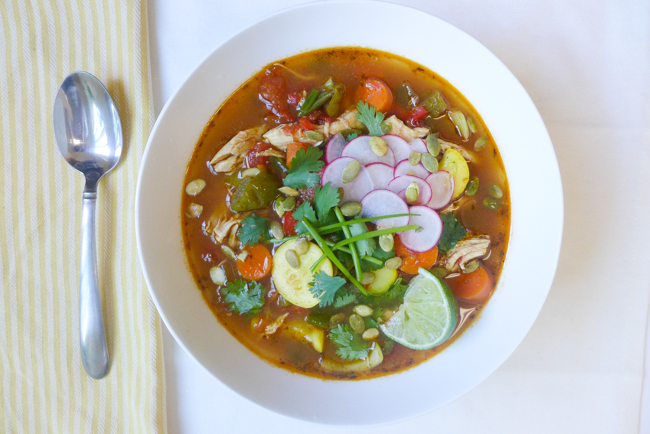