I’ve been doing monthly guest posts for Food Renegade… she has an awesome blog if you don’t already know about it!  This month, I decided to share this tasty recipe!  It’s a lemongrass-ginger marinated chicken laid over a bed of zoodles… yom yom. 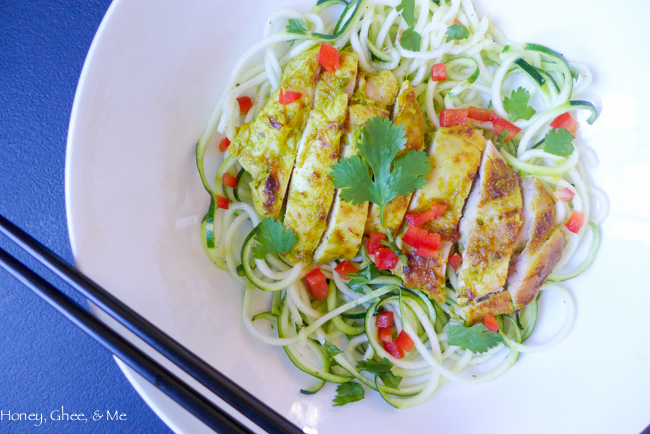 I love lemongrass.  It’s so refreshing, earthy, light.  It’s one of my favorite flavors out there actually… and mixed with a smidgen of ginger, cilantro, and lime, it’s divine.  Divine I tell you.

That’s why I adore this Lemongrass Chicken served over zoodles (zucchini noodles).

Like any marinade, the longer it sits, the more flavorful it gets.  Ideally, this would marinate overnight, but if you simply don’t have that long, aim for a few hours at least.

I don’t typically plan my meals the day before- I’m just not that organized most the time- but when I do, it makes the day of soooo much easier.

Once I made the marinade, all the work was pretty much done.  I just plopped the chicken in the sauce, threw it int eh fridge, went to bed, and then the next day just had to bake those bad boys for 15 minutes and boom, done.  Easy, right?

I served these over zoodles {zucchini noodles}, but they are tasty over rice, cauliflower rice, or in wraps, too… or hey, why not over some kale sauteed in coconut oil?  Get creative… I’m a zoodle maniac, so I eat them any chance I get.

{Want a super easy zoodle recipe?  Check out THIS easy pesto zoodle salad… it’s the simplest, but oh so tasty!} 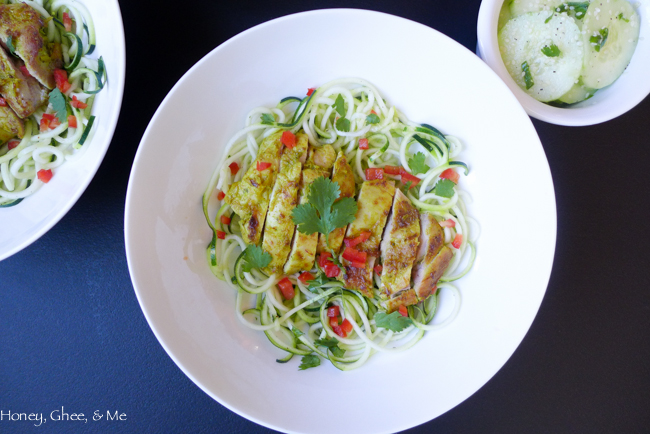 This is a low FODMAP recipe, meaning it’s a good option for people with sensitive guts.

FODMAPs are food that can trigger discomfort, bloating, etc in some people… sadly, me being one of those people as of late.

It’s typically a healing diet, meaning the trigger foods are eliminated temporarily, until whatever particular gut issues are resolved.

What are these trigger foods I speak of?

Onions, garlic, avocado… I know, rough.  The list goes on and on, but those are the three important ones in my book, since I eat them all the time.  I mean, onions and garlic are in everything.

Shocking, I know, but it’s true.  This recipe is one of them… so it’s safe for all with low FODMAP needs, but tasty for all who have none of those needs, too!  It’s a win-win. 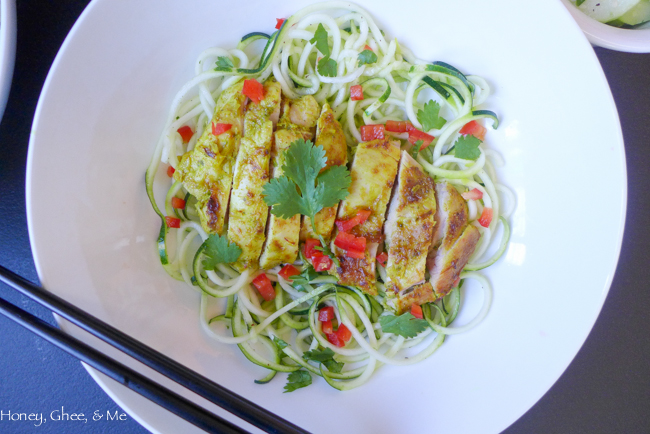 I made a teensy little cucumber salad to go with…. with just some thinly sliced cukes, thinly sliced green onions (the green parts are considered okay on a low FODMAP diet), vinegar, sesame oil, and sesame seeds.  Simple, but marvelous as a side with something like this. 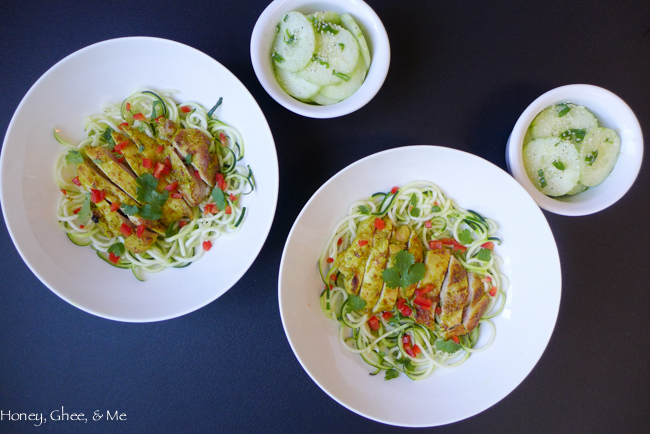 If preferred you could make this with breasts… I have before, it’s good.  Somehow though, the thighs jut seems to be a perfect fit.  They’re small, tender, and flavorful.  Use whatever you like though. 🙂 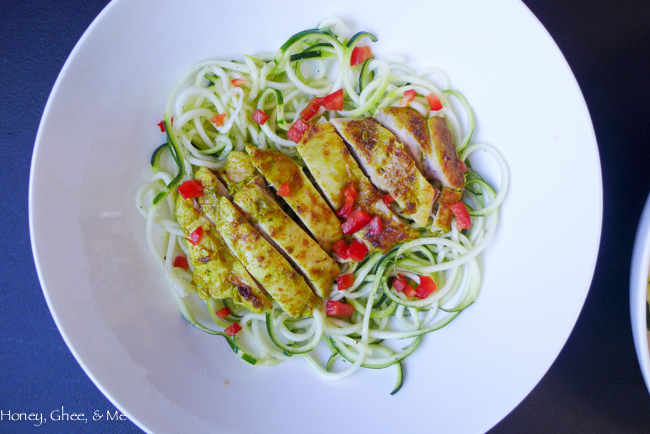 For a garnish, I chose little diced red bell peppers and cilantro… for both color and flavor.  You could add in more goodies if you’d like too though… thinly sliced jalapeno pepper, green onion, or even a little melted salted coconut oil.  All would be delish! 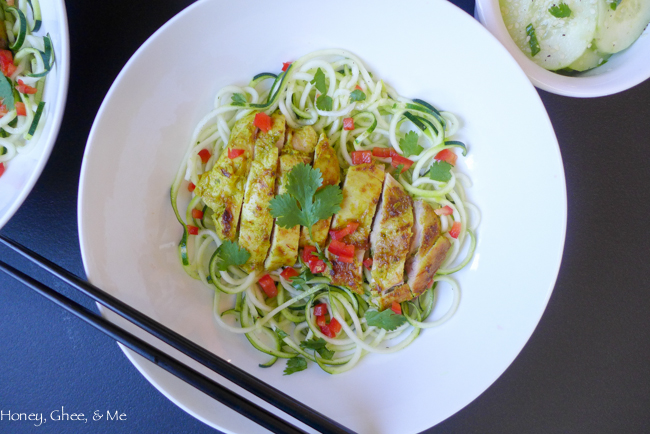 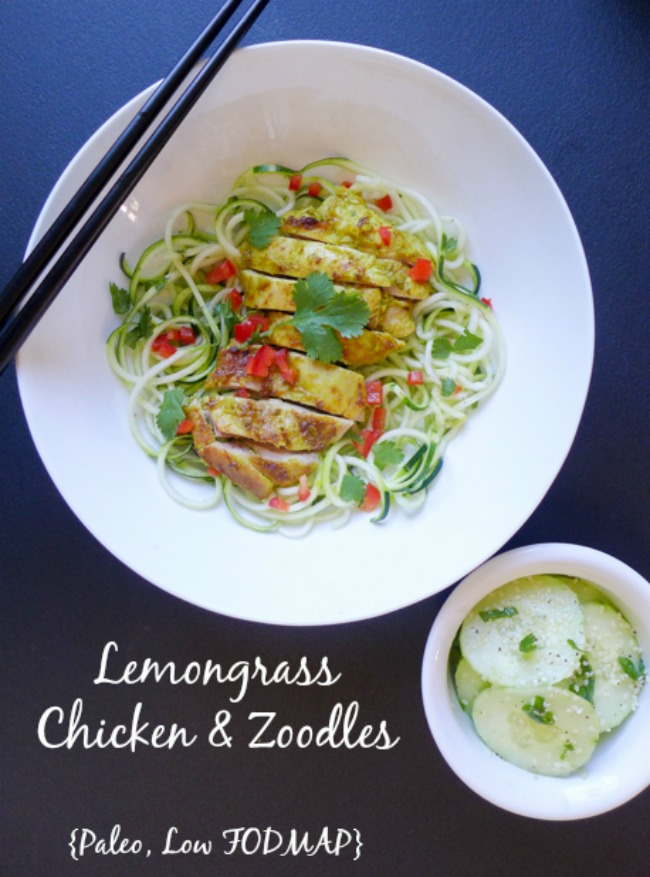