I have been making this recipe nonstop lately, so when I was deciding which recipe I wanted to share on Food Renegade’s page this month (I do monthly guest posts for her site), I decided on this one… it’s simply too good to not share 🙂 Read below to see more, then check out the link below to see the recipe! 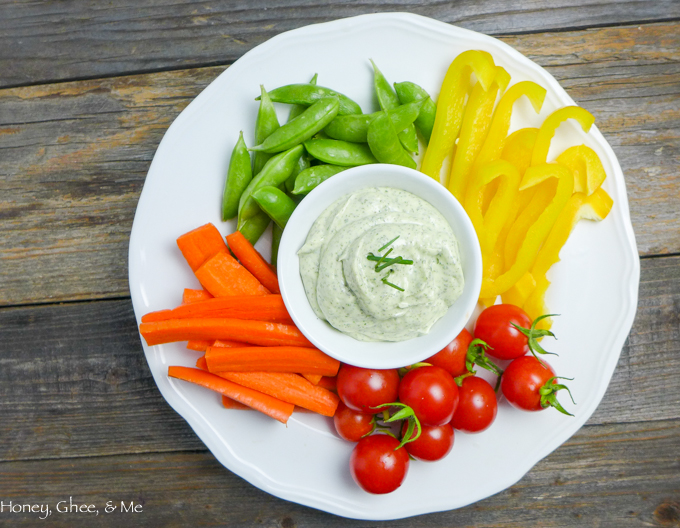 I’ve never met a person that doesn’t like ranch dressing.  Never.  What I have met however is people who don’t want to eat it because it’s generally made with total crap. Understandable.  I was one of them. Until recently… when I discovered that it’s so easy to make homemade ranch dressing.  In short, start with mayo, add seasonings, and enjoy.  Not bad.

I started making my own homemade mayo a few months back (see the recipe HERE). Turns out, with an immersion blender, it’s the easiest thing in the world. Seconds, literally, it takes seconds. As I was shown by my friend Kristen from Living Loving Paleo, a simple mayo can be transformed into a tasty ranch with just a few minor additions.  We were at a potluck at Arsy from Rubies & Radishes’ house over the summer; Kristen brought this ranch that was oh so good (I would be failing if I didn’t give her credit for this fabulous creation- she is the inspiration behind this bad boy!).  Realizing it was just mayo with seasonings, I went home and started playing around with various herbs and amounts until I found the exact concoction I wanted. Since, I’ve been going through about 1 jar a week.  For a girl who didn’t even really like mayo, and who rarely bought ranch, that’s pretty impressive.  I reaaaallly like this stuff.  😉 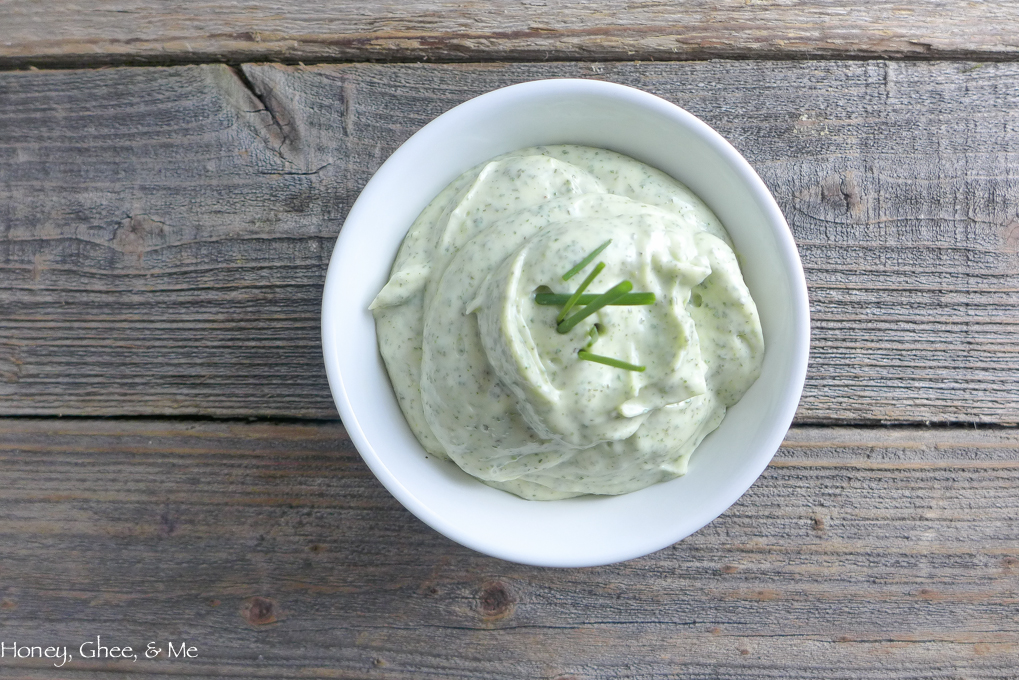 This ranch is a thick and creamy one, perfect for a dip. Growing up, I loved Marie’s ranch with carrots and celery.  My family would go on road trips a lot when I was younger… I just sat in the back seat devouring ranch like a mad woman for days.  I loved how goopy it was. This ranch is like that.  If you want it thinner, no prob… just add a little buttermilk, regular milk, or coconut milk until you get it to your desired texture.  I personally prefer it left a bit thick though.   Even for salads, I just plop a dollop in, toss, and it perfectly spreads over each and every piece. 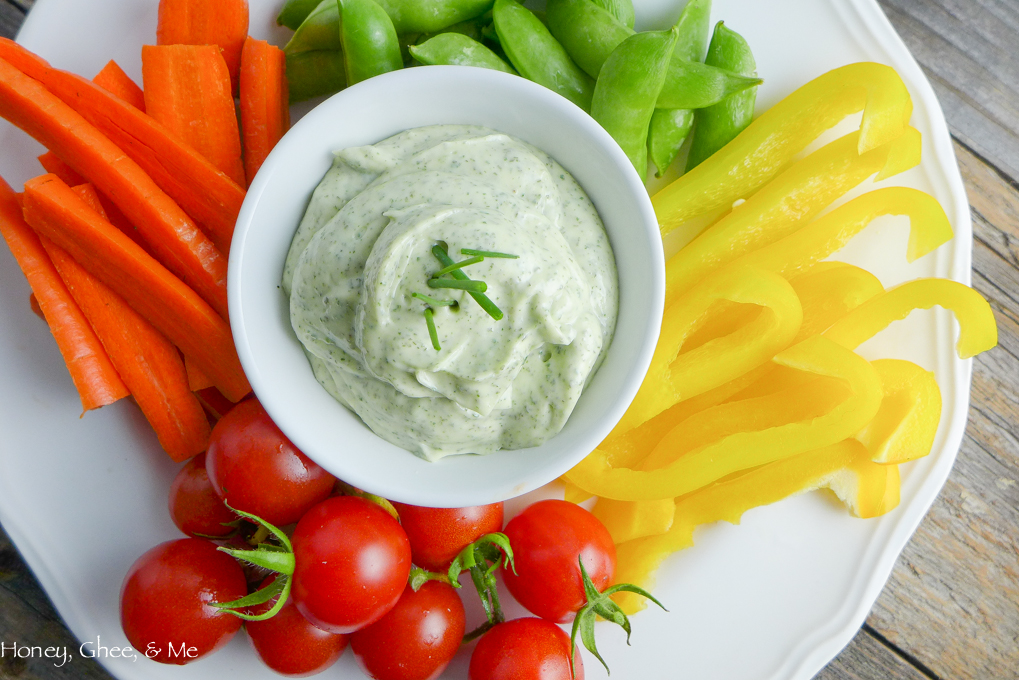 I’ve played around a bit with this recipe.  I typically like a lot of dill and lemon in ranch.  Recently though, I whipped up a batch that was an accidental goodie. I didn’t think I’d done anything different, until I saw that my jar of what I thought was dill was actually a jar of dried thyme.  I was pretty surprised actually- thyme was really good, even if a total accident.  So I added in some dill too and dug in. I realized then that for those who don’t like dill (I know, weird, there are some people who don’t like dill out there!), thyme would be a great substitute.  You can play around if you feel like it too… just make your basic batch (recipe below), and then try stirring in different amounts of things and tasting as you go.  I’ve found the recipe below to be my favorite standard go-to.  🙂 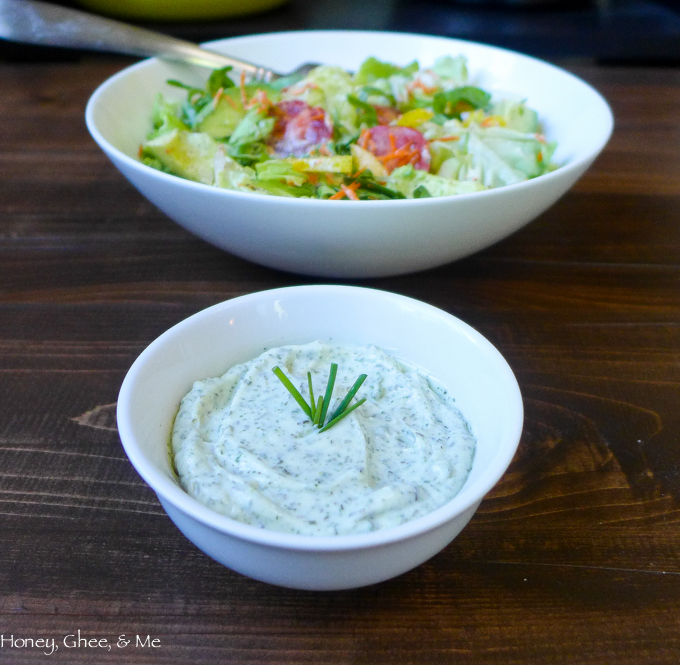 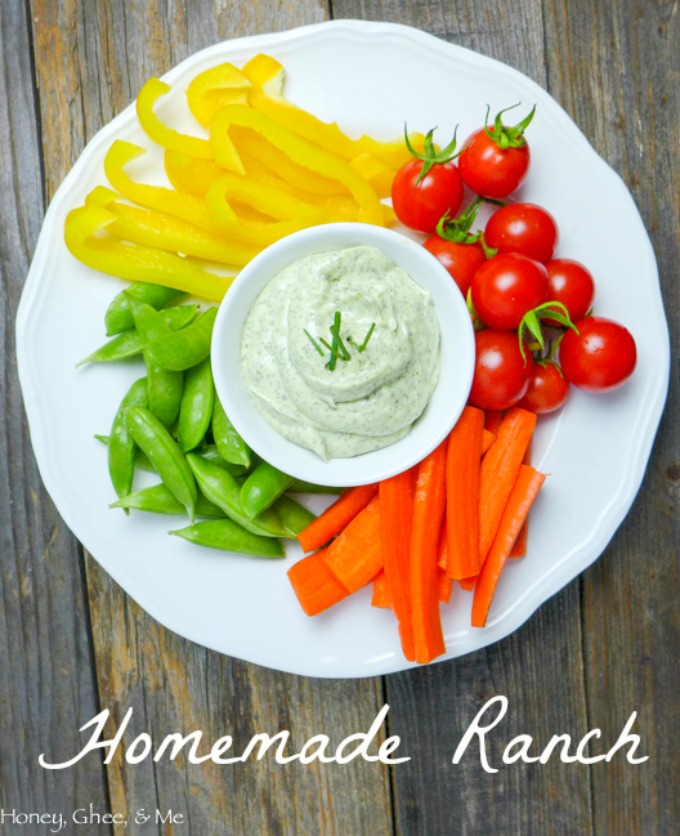