I love finger foods, this is a fact.  I love finger foods even more when they’re easy to whip up and simple to make.  These, my friends, are exactly that- easy, simple, straight-forward comfort finger-food goodness.  And guess what, no deep-frying here.  Just boiling, baking, and devouring.  I triple like. 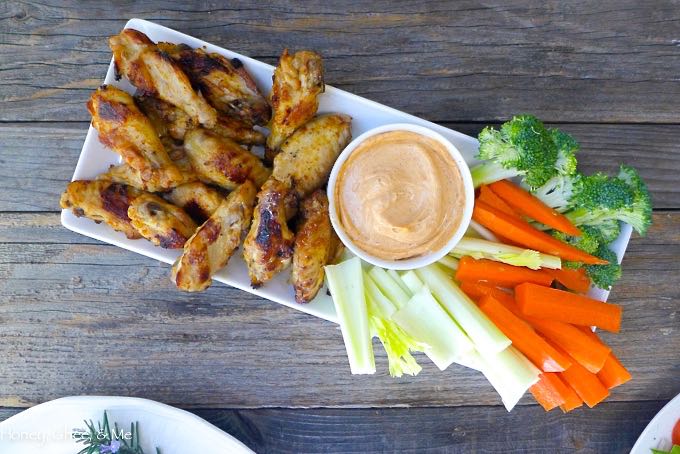 I was never a huge chicken-wing gal.  Yah, they’re good, but eh, wasn’t ever my go-to snack.  Until recently. A few months back, I bought some wings and decided to come up with a quick version of wings on the spot.  I busted out my ghee, coconut aminos (a soy sauce-like taste, just a bit sweeter, less salty, and Paleo-approved), and Louisiana-style hot sauce.  I mixed it all up, slathered it on, and fell in love.  It literally happened just like that.  I loved how tender yet crispy the wings were. Soft on the inside, crispy and flavorful on the outside.  What made them so you ask?  I think the key is the boiling.  I boiled them in water first, which makes the meat super tender, then baked them in the sauce to get the skin crispy.  No deep-frying, no messes.  Just a simple and healthy way to cook these bad boys up. 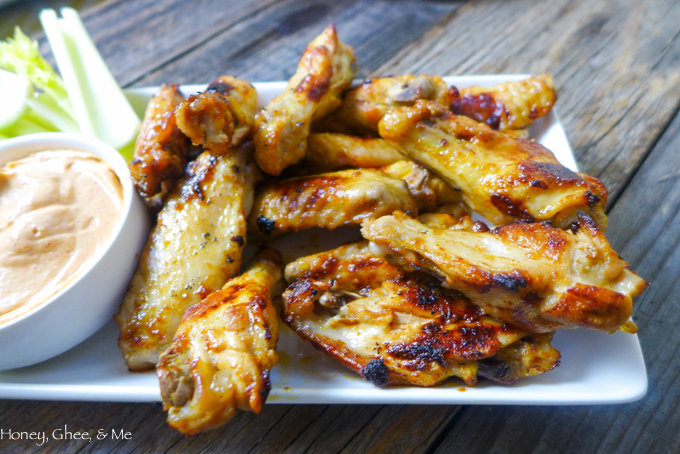 Since that first wing-making success, I’ve been making these guys right and left.  Probably a good ten times I’d say, each time with the exact same method.  I’ve used different hot sauces- I’ve tried a habanero one, a homemade one, and local pepper sauce…. all are good, but there’s something super tasty and straight-forward about that tangy Louisiana-style kind.  I just like it.

Of course if you have a different kind of sauce in mind, go for it… you could use this method of cooking with any sauce you like.  I’m a fan of playing around and experimenting… 🙂 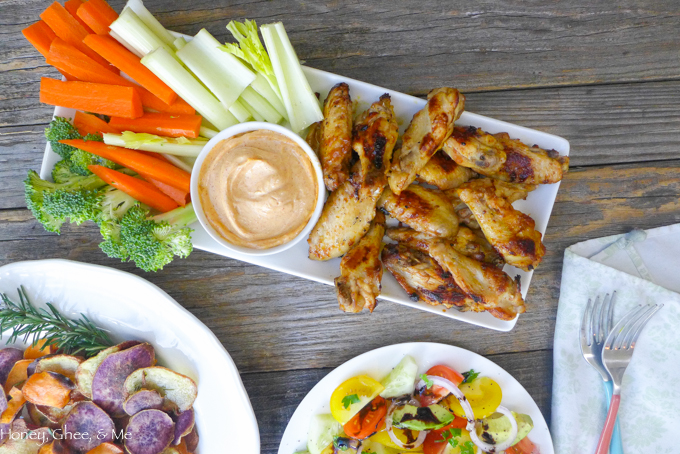 Sometimes I serve these guys with ranch- man, it’s so good (see the recipe for my homemade ranch HERE).  This last time though, I made a chipotle mayo… it was a killer combo.  Would totally recommend it- check out the recipe HERE! 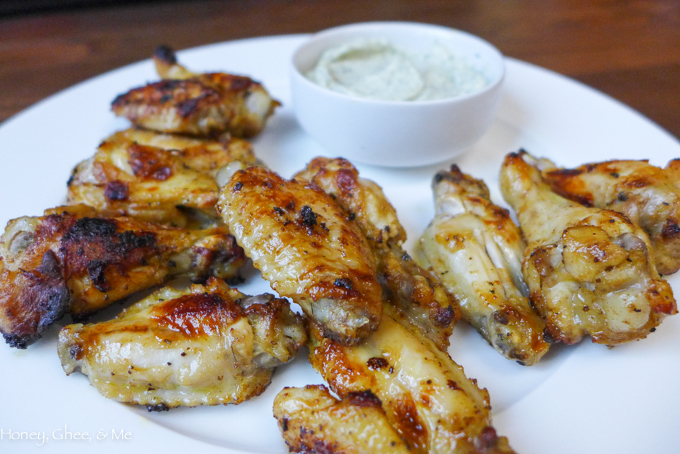 Have an event coming up that requires some longer-food munching?  {Cough cough, Super Bowl!}  Here’s one of my go-to platters… cook up some wings, make some chipotle mayo dip, and serve it all with some chopped veggies.  That’s a real people-pleaser.  Sometimes I’ll add in a few more treats, like these homemade potato chips (made with sweet, Hawaiian, and Russet potatoes, and a simple tomato-avocado salad.  Finger foods are my fave. 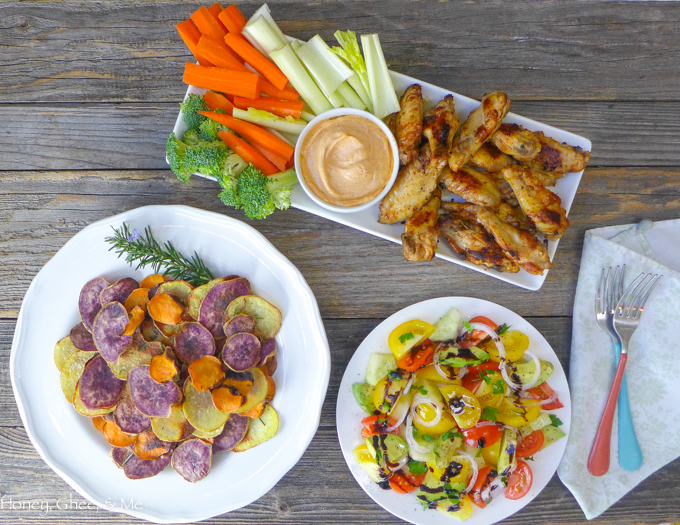 3-4 tbsp hot sauce, depending on spice-level*

use more for less spicy sauces, less for spicier ones

**Serve with homemade CHIPOTLE MAYO!
(Don’t feel like making it from scratch?  Add the spices to mayo- boom, good enough)

***Heads up, these aren’t the buffalo-style super saucy wings…

if you want them extra saucy, toss ’em in extra sauce at the end before devouring 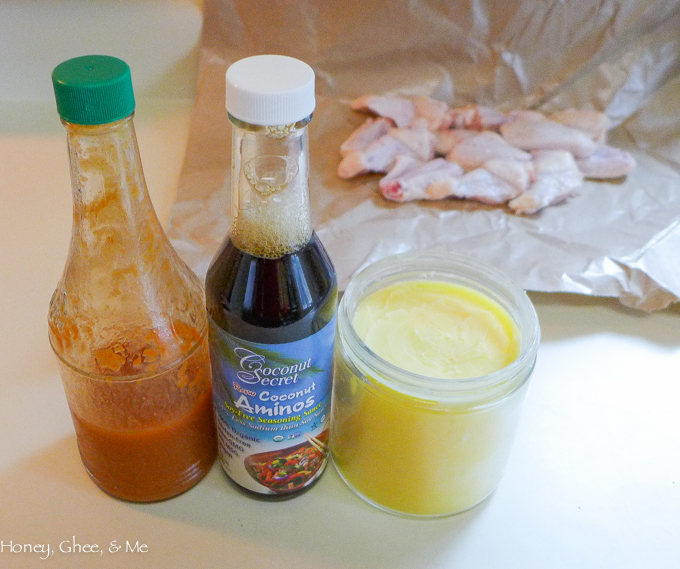 To make the sauce…

Add the ghee, hot sauce, and coconut aminos together in a small bowl 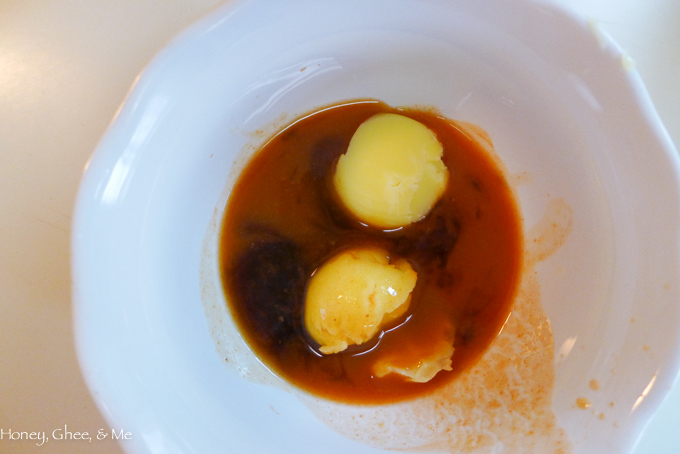 Taste to adjust flavors as desired

Set aside for now 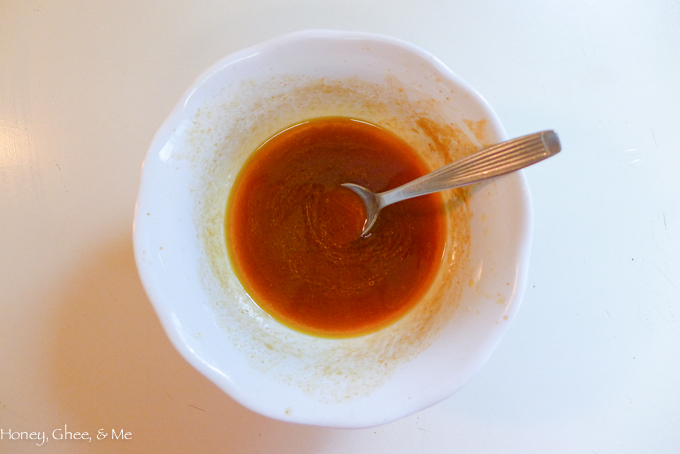 Heat a large pot of water to a boil

Lower heat to med-high, for a light slow boil, and cook for 10 minutes 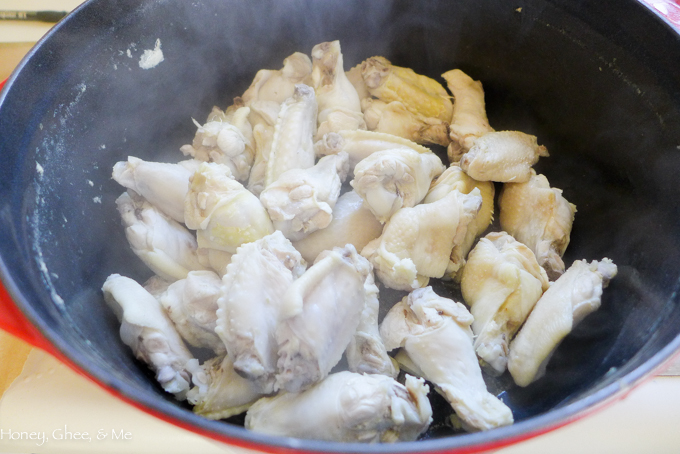 Basically, “party” wings are cut into smaller little pieces and don’t have the wing tip

It makes them easier and more ‘fun’ to eat

or you can easily chop them into party wings yourself

This is much easier to do after they are cooked first… 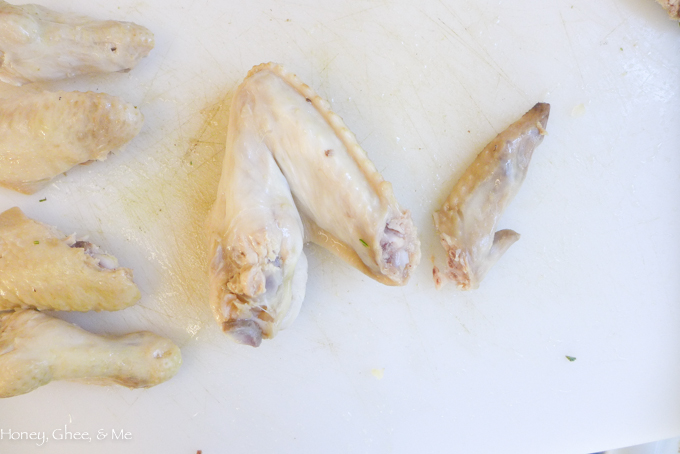 Then hack the wing apart right at the joint… 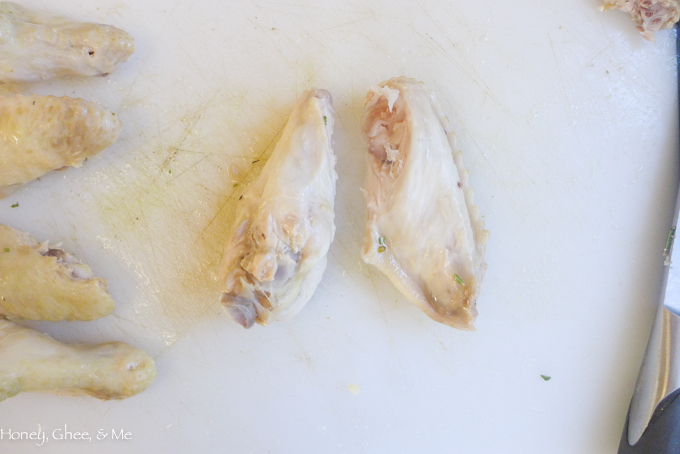 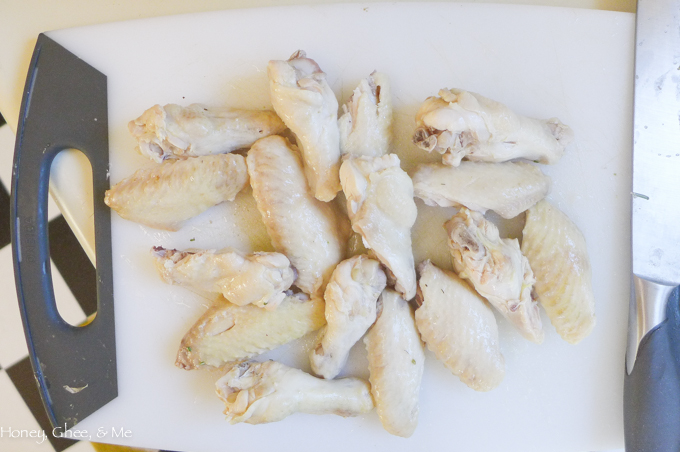 Toss wings in a bowl 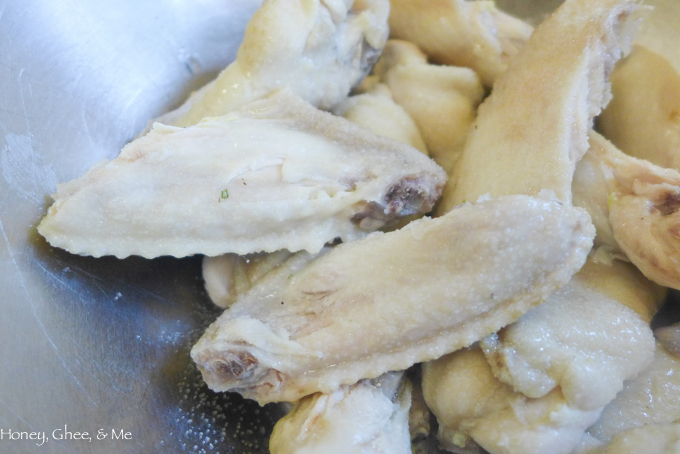 Pour the sauce over the wings

The longer you let them sit, the more flavor they’ll absorb… 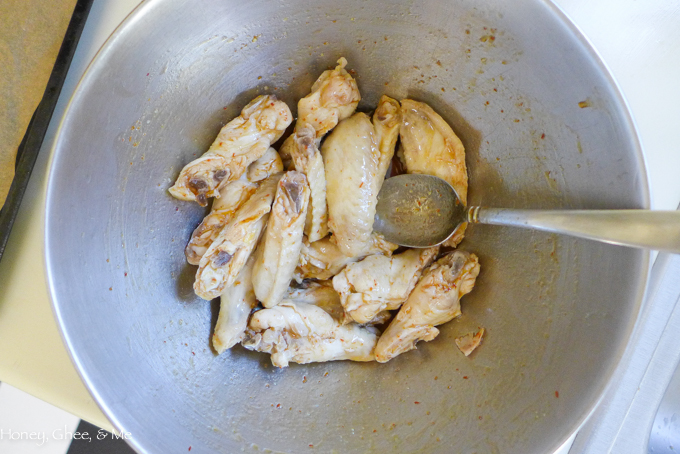 Line a baking sheet with parchment paper (or foil) 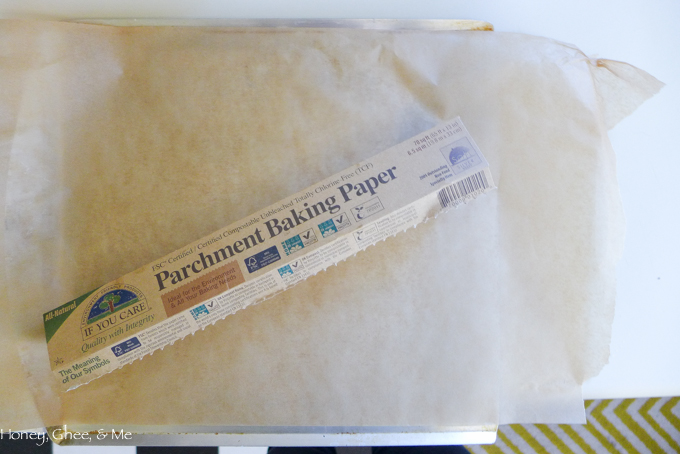 Lay the wings down, skin-side down, and drizzle with about half the sauce 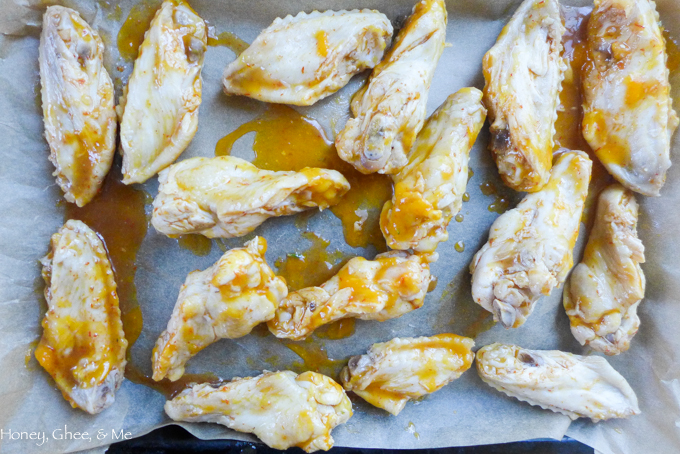 Bake for about 15 minutes- about half way through, once skin is browned,

flip them and pour the remaining sauce over the tops 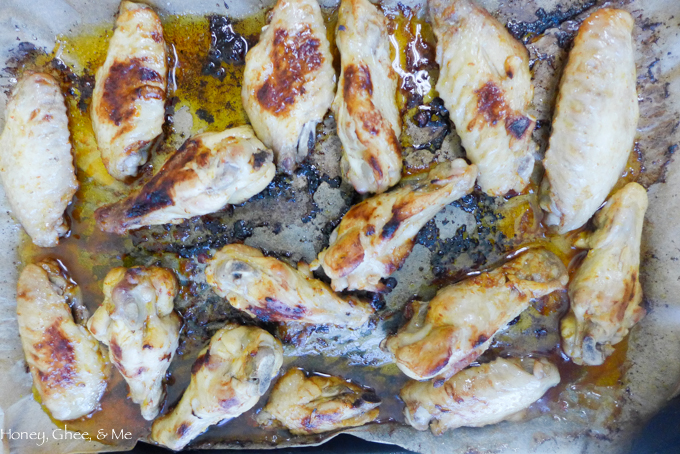 Serve with your favorite dipping sauce and enjoy!!