Borscht is one of my absolute favorite soups.  There are so many versions- some have meat, some are served cold, some have cabbage, but pretty much all are delicious.  This version is the one I grew up eating (courtesy of my mom, the Soup Queen), with a few minor tweaks I’ve added over the years.  It’s a serious hit in this house.  Cozy, healthy, comforting, sweet, savory, and so freaking tasty.  Oh, and beautiful… those red beets, they’re just so darn pretty. 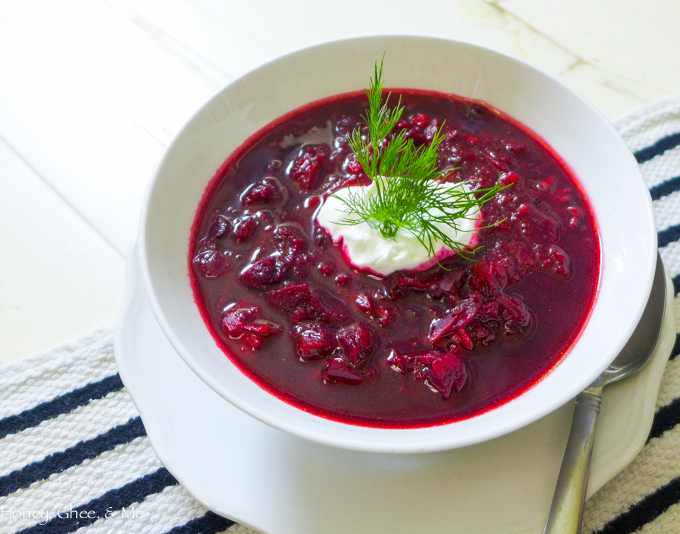 You can check out my older version of this Borscht, and a version made with golden beets here: Golden Borscht.  This one just have a few minor changes based on things I’ve come to learn and love since first posting the recipe on the blog years ago.  Years of cooking daily is bound to have taught me a few things, or so I’d hope 😉

First- this newer version has chicken broth only- no water added.  (See my homemade version HERE).

The next change is the addition of cabbage.  My mom added cabbage to hers often, as do many of the traditional Russian borschts out there, but for whatever reason, it was something I didn’t use in the previous recipe.  You certainly don’t have to have it- it’s not super noticeable in there- but a handful of cabbage adds a little touch of substance and flavor to the predominately root veggie soup.  I like it.

Lastly, I added garlic.  I mean, I use the stuff in pretty much everything I make, so it’s a bit of a shocker I didn’t add it in the older version.  Just a small amount adds a bit more depth. 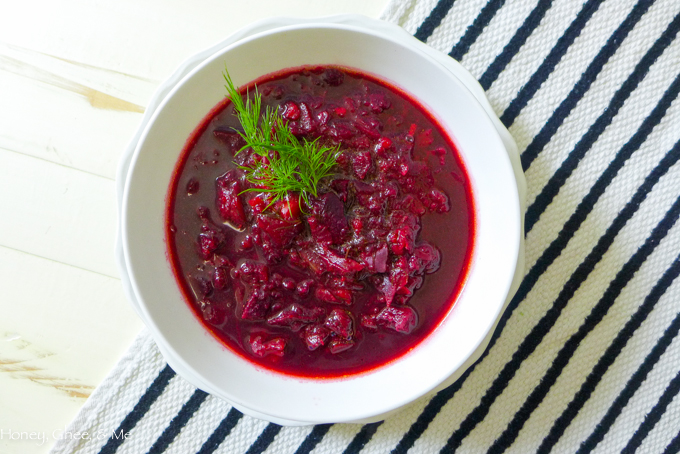 This soup is totally Paleo- grain-free, gluten-free, dairy-free, junk-free.  It’s just pure clean goodness.  BUT, if you are a dairy-doer, it’s suuuper good with a dollop of Greek yogurt of sour cream plopped on top- fyi.  Avoid if dairy does you wrong (or maybe you have some dairy-free version you like and use), but the small addition adds a tartness and creaminess that works really well with these flavors.   It’s totally delicious either way though, so enjoy however is best for you. 🙂 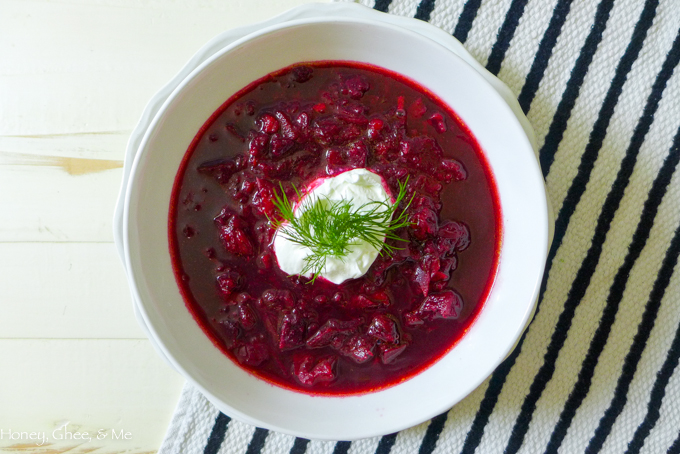 Did you know borscht is often served cold?  And it’s actually really good that way.  I tend to serve it hot, but often times, the next day, I’ll bust into my fridge and gobble some up right from the tupperware bowl, chilled and cold.  It’s one of the few soups that is genuinely tasty both hot and cold.  In winter, I always opt for hot though… it’s just so cozy and comforting. 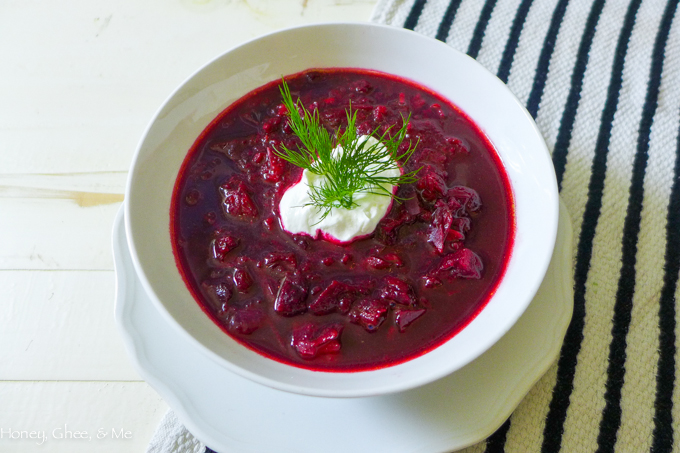 Fresh dill is a major ingredient in this borscht.  Please do yourself a favor and do not use dried dill- it’s simply not the same.  This guy really needs a good heap of fresh dill in it.  I also add a little pinch of caraway seeds (use fennel seeds for a sub. if preferred).  It adds a very subtle flavor that works extremely well with this mix.  I have my mom to thank for that genius idea.  🙂 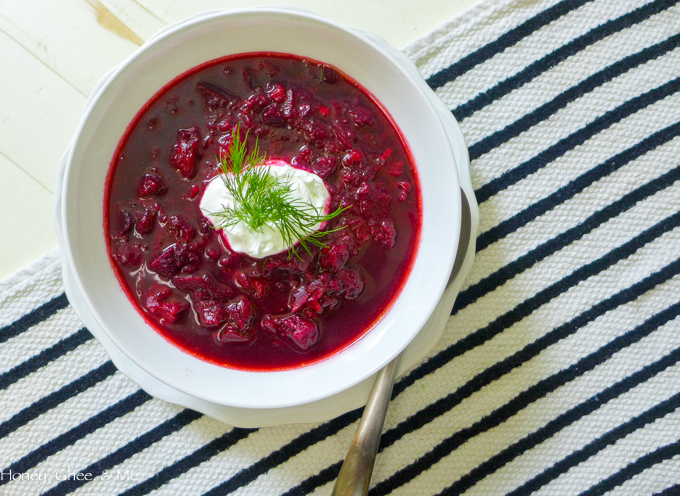 Next time your CSA or farmer’s market stroll lends you a heap of beets and carrots, whip up some beet soup… your body will thank you.  🙂  (But watch out for the pink pee- seriously, it can shock ya if you’re not prepared for it!) :0 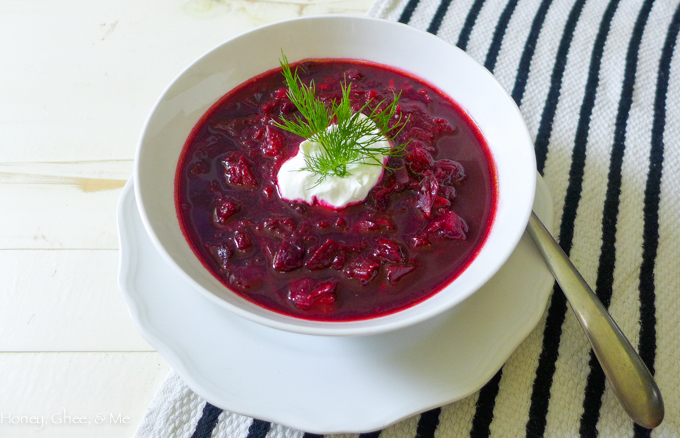 extra salt and pepper, to taste 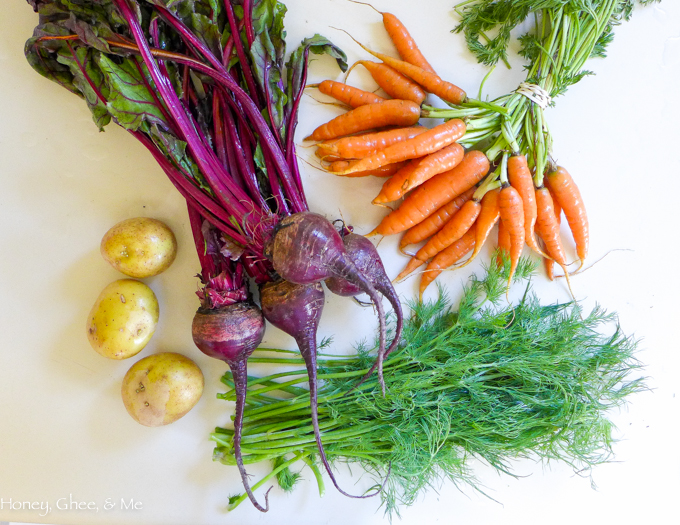 (Mister Onion didn’t find in way into this pic)

If beets are pretty large, chop smaller into bite-sized pieces

(As far as peeling beets go, you can, but I don’t- the peel becomes soft and sort of just blends into the soup once done.  You certainly can if peels bother you, but it’s a bit tedious if you ask me) 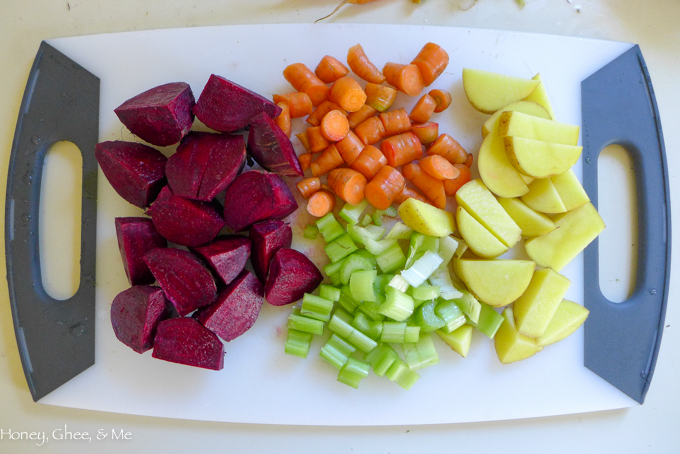 Add the beets, potatoes, onion, carrot, and celery along with salt and pepper

Saute for about 5 minutes, stirring occasionally 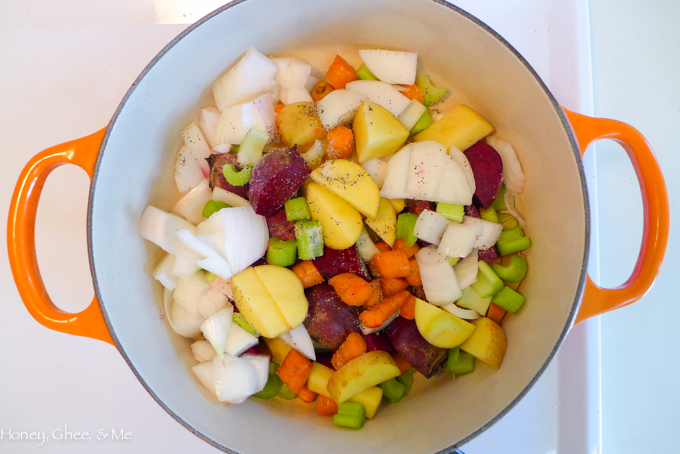 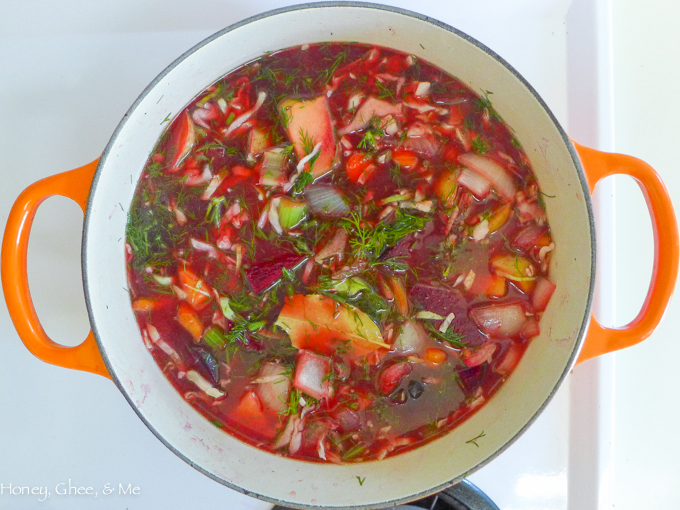 Cover, lower heat to low-medium so the soup is just at a simmer,

and cook for approx 1 hour, until beets are soft 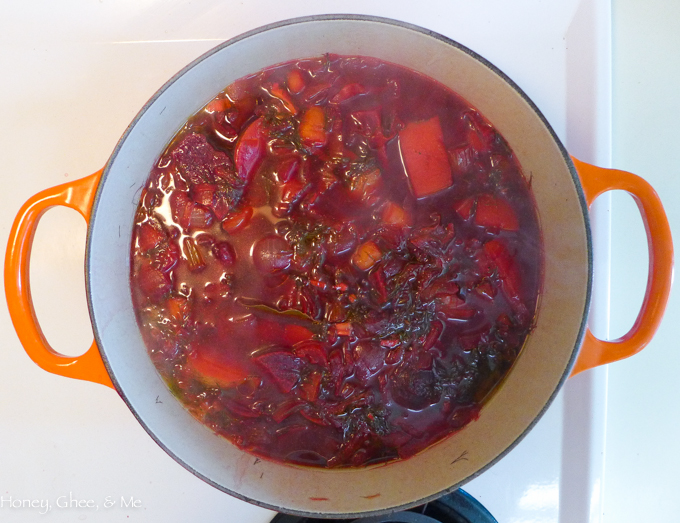 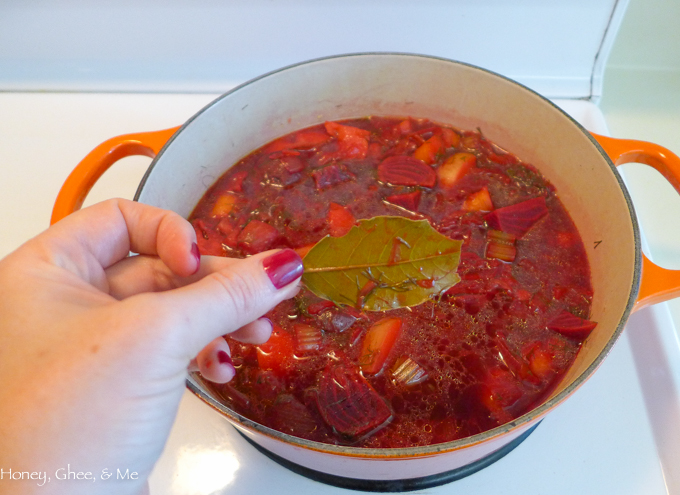 Using a masher of some sort, smash all the veggies until the soup is a consistency you like 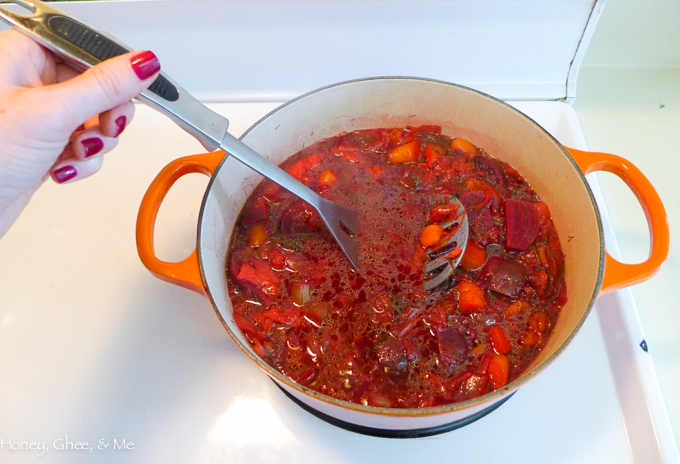 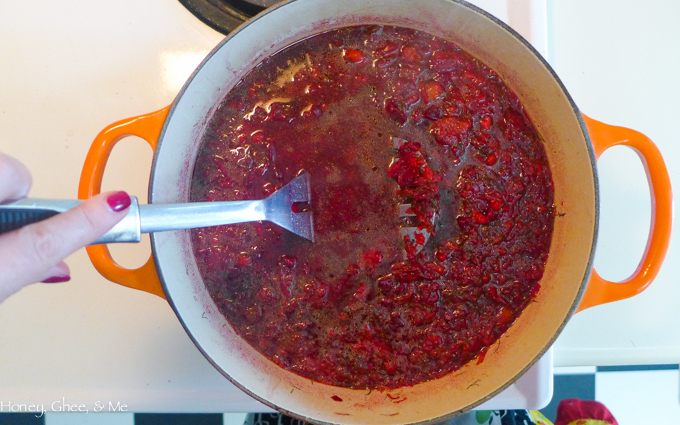 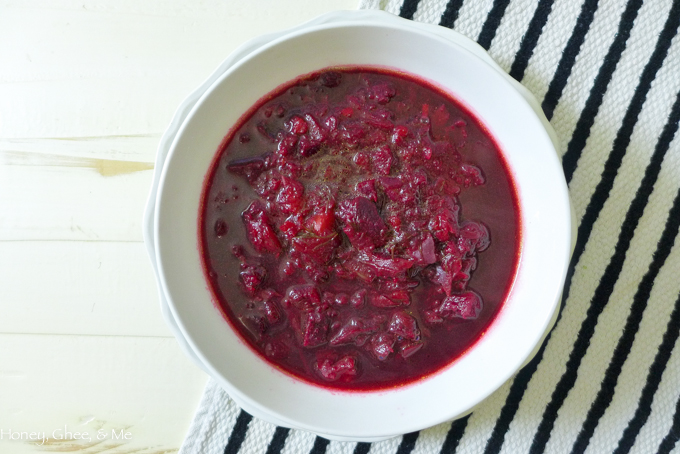 If you’re skipping the dollop of creaminess, just plop a sprig of dill in there and dig in

If you’re a yogurt or sour cream fan, scoop a heaping blob in there, top with dill, and scarf 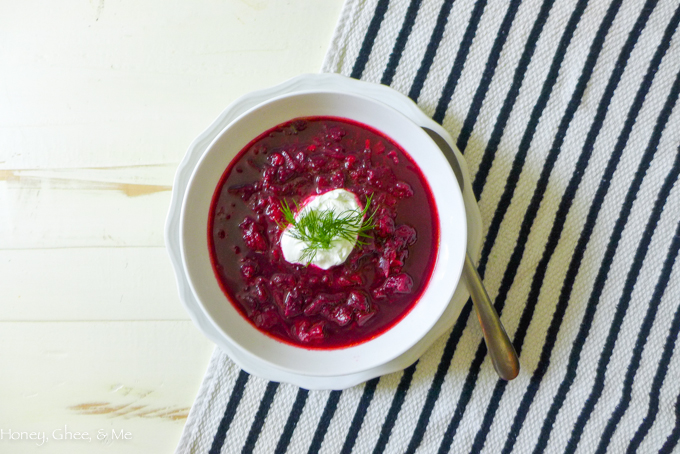