I’ve since added a more traditional style Chile Verde recipe to the blog… see it HERE if you’d like!

There’s just something about Latin-style cuisine… it makes my soul happy.  This recipe was created by a white chicken chili craving that spun quickly into a green chile and chicken soup.  I was craving a chili flavor, but didn’t want beans, didn’t want it heavy, and didn’t want it to make my belly mean and angry.  I just wanted a light savory broth full of tasty green chile favor with tender shredded chicken breast.  This concoction was spot on.  Since creating it, I’ve made it many times, each one ending with a smile on my face and a very happy belly. 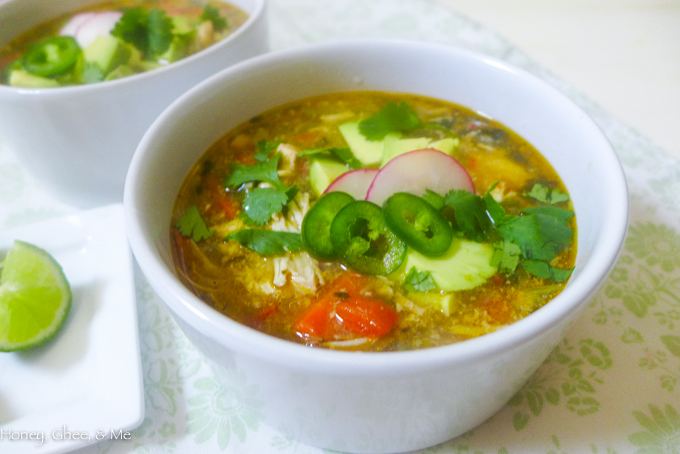 The ingredients list may look long and daunting, but it’s really just a bunch of standard pantry finds that I imagine most kitchens have… lots of dried seasonings and herbs.  The two things you may not have on hand: potato starch and fresh green chiles.  Let’s start with the first.

Potato starch isn’t something I cook with often, but it’s a great (simple and easy on the gut) starch to add as a thickener in something like this.  It won’t make things as thick and sticky as say a corn or arrowroot starch, but it just gels it all up a teeny little bit.  I use THIS one from Bob’s Red Mill… it’s affordable and I trust the brand.  It can be found at most Safeway’s, Whole Foods, Raley’s, etc.  If you’d rather go without it, no huge deal- it just adds a subtle texture to the broth, which I personally like.

Green chiles, well I suppose this depends on where you live.  Where I live (California), green chiles of every kind and sort smother the markets all year long.  That may not be the case where you live though.  Poblanos are often mistakenly referred to as Pasillas north of Mexico, and are interchangeable with Anchos, as well… so it can be confusing to know which to get.  Basic rule for a soup like this- get a mild green chile that won’t burn your tongue off.  You don’t want jalapeños, habaneros, or anything little and potent.  Just a nice large pepper that adds a green chile taste without the spice.  If you can’t find Poblanos or Anchos, try an Anaheim instead.  Worst case scenario, try the canned section, though nothing can replicate a fresh chile flavor.  Nothing.  🙂 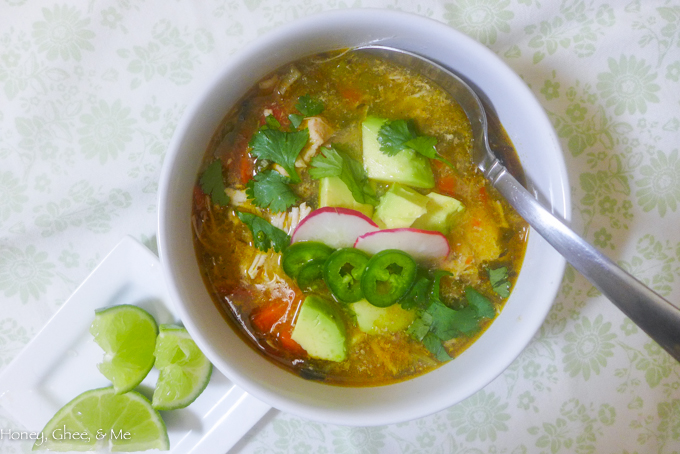 What I really love about this soup is the toppings.  I’m a topping-freak… a garnish goblin, shall we say.  If it can have a topping, I will top it high.  I love a buffet full of garnishes… whether it be tacos, pho, salad bars, or soups, I’m all about the spruce-ups.  They add flavor, texture, color… they can do no wrong.  So I went all out for this soup too… radishes, jalapeno slices, avocado, lime.  Of course you can keep going if you want- crispy tortillas or chips, sour cream, cheese, cabbage… get creative.  I threw shredded monterey jack and sour cream on the man’s… gave it an extra boost of love. 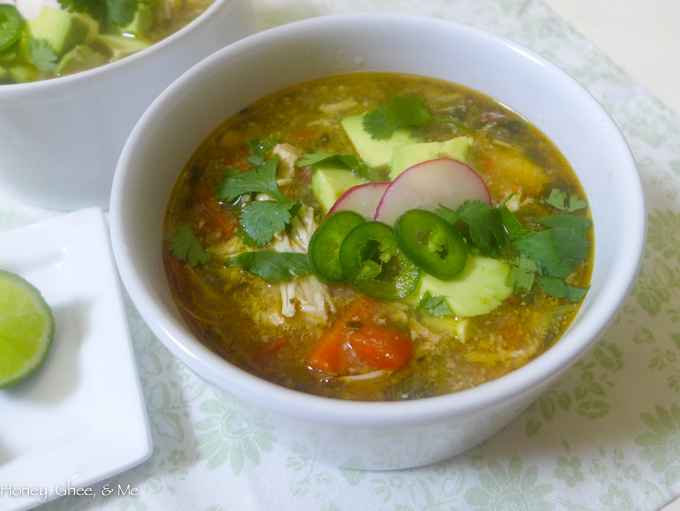 Want more?  I made this for my folks while visiting them a few weeks back… my step-dad loved his with a little warm rolled up tortilla on the side.  Corn, plantain, whatever kind of tort you like. 🙂 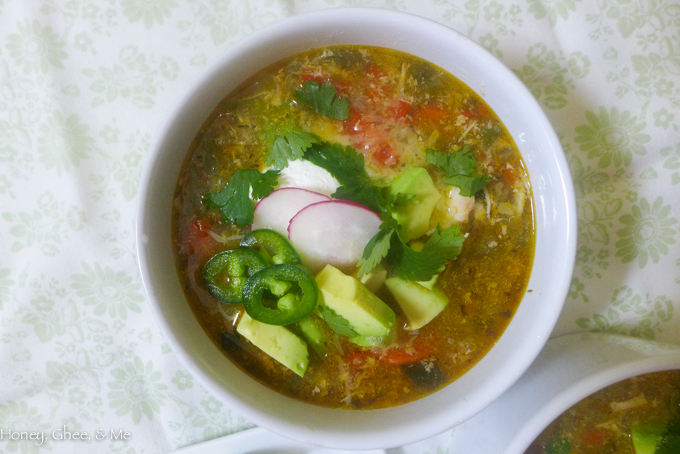 Me?  My style’s a bit more out there.  I’ve recently been really into eating soups for breakfast… which started with this recipe actually.  It suddenly occurred to me that a fried (or poached) egg would be really good over this soup… perfect flavor combo for a Latin-style brecky.  So I cracked an egg, fried it up in some ghee, and plopped it over the top of a warm bowl of soup with some avo and cilantro.  It was perfect.  With a slightly runny yolk (if that’s your thing of course), it was just what I needed to start my day.  Since, I’ve been making egg-over-soup at least once a week, no matter the soup.  Don’t knock it till you try it 😉 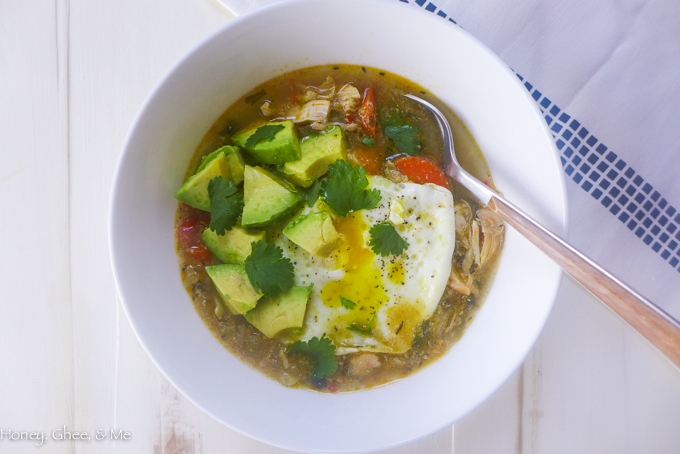 2 tbsp potato starch (used to thicken the broth,  THIS one is my fave) 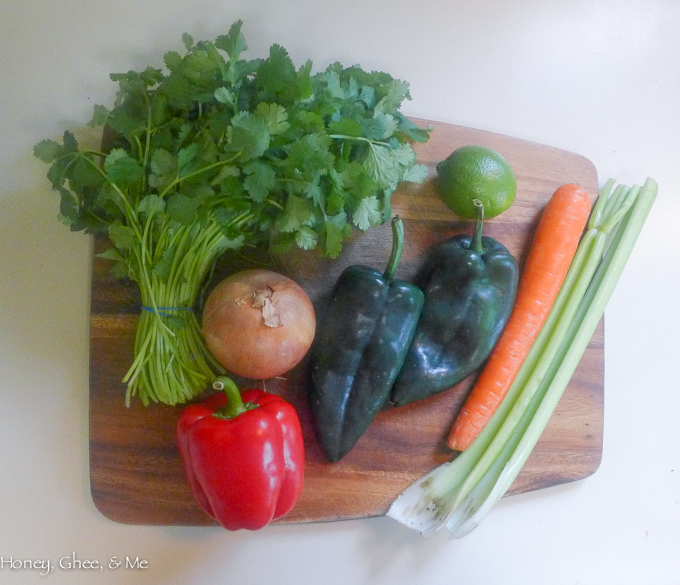 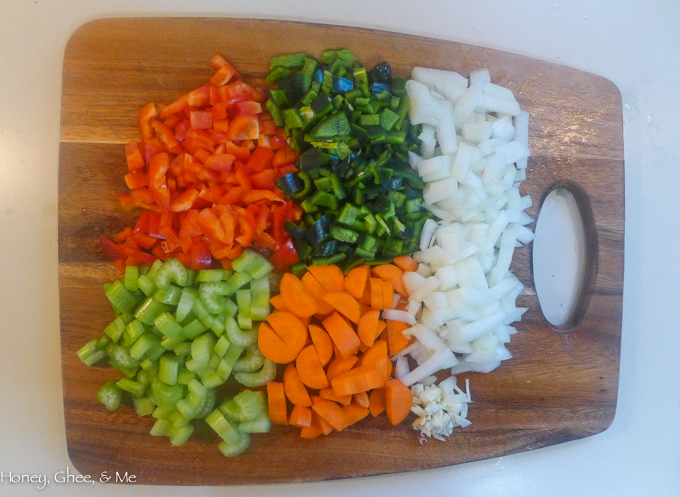 Heat olive oil in a large pan over medium heat

Add the above chopped veggies

{Wondering why it’s good to saute first?  Technically, you could just throw all the veggies right in the pot raw- it’d certainly save time.  Thing is, sautéing them first brings out their flavors- as they sweat, the onions become sweeter, the peppers more flavorful, etc… so it’s a good step to take if you have the time} 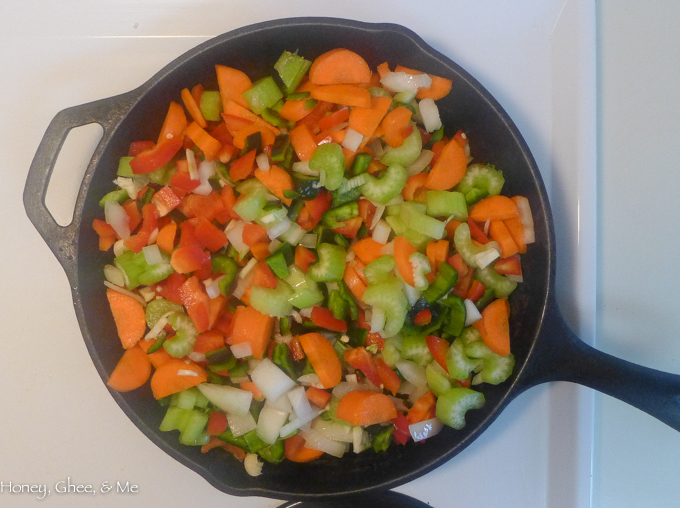 Add all of the seasonings, except the bay leaf and fresh cilantro (chili powder though salt)

Cook for a few minutes longer, until veggies soften 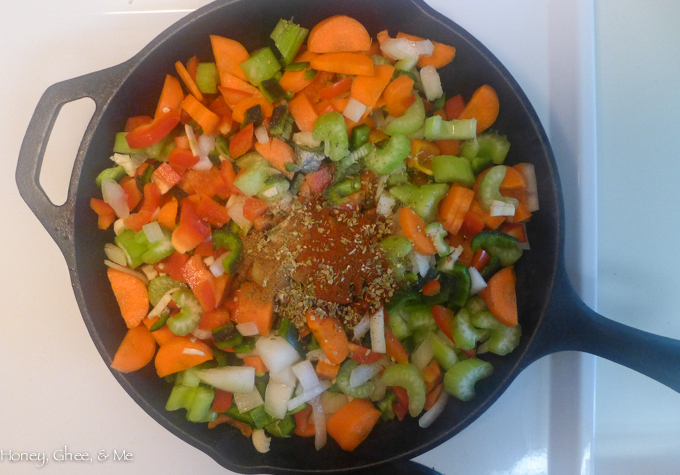 Add the sautéed veggie mix to the Crock Pot 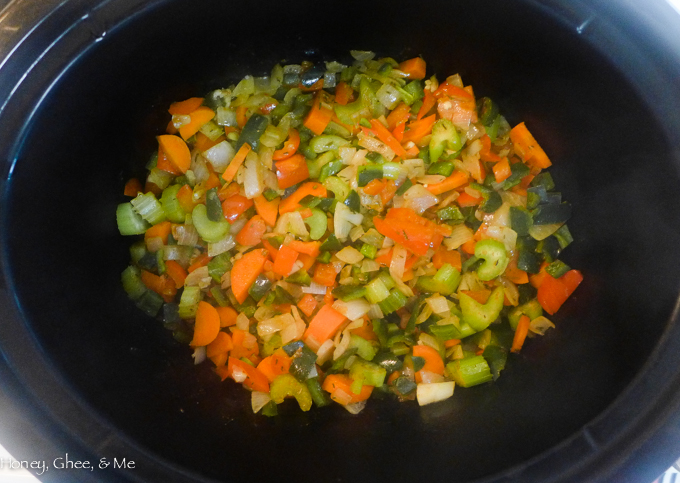 Not necessary, but optional- slice chicken breasts into smaller pieces

(Chicken will break up either way- so if you

don’t feel like messing with it, just throw breasts in whole) 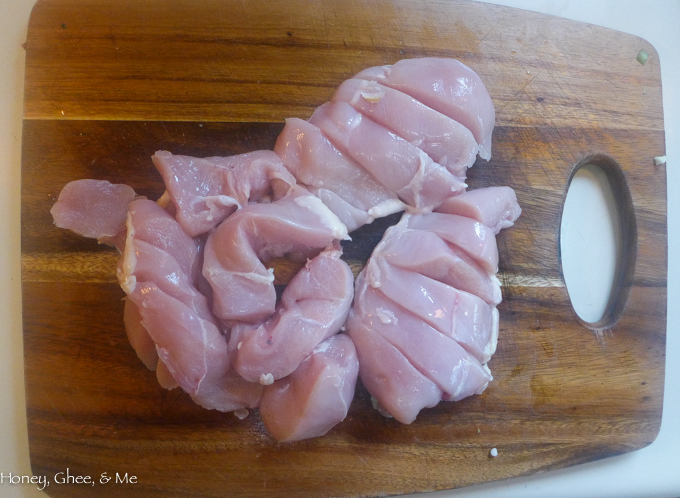 Add the chicken to the pot 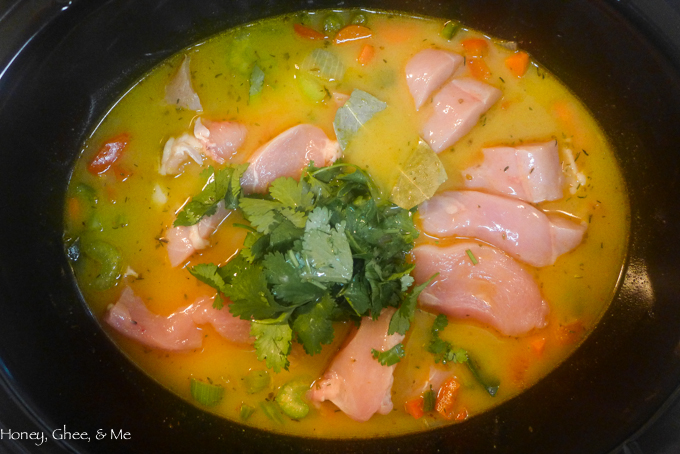 Gove it a good stir, making sure the chicken is completely immersed in liquid 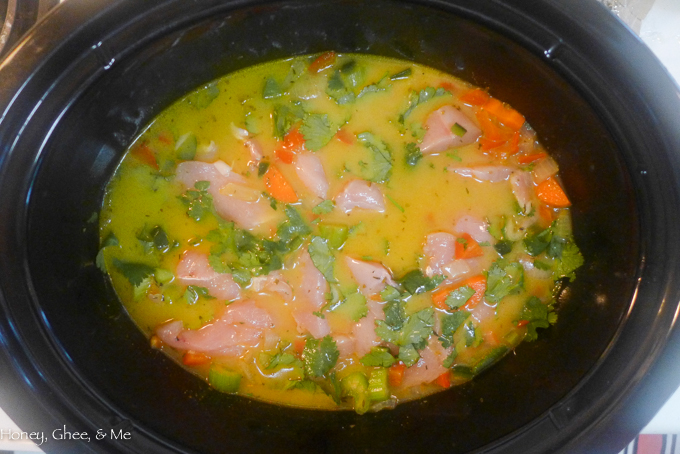 If you sliced the chicken ahead of time, you’ll notice some small pieces hanging out in there

(if you didn’t pre-slice it, they’ll be quite large)

Break them all up with a fork or spoon, until shredded…

this will happen instantaneously, as soon as touched (the beauty of a slow cooker) 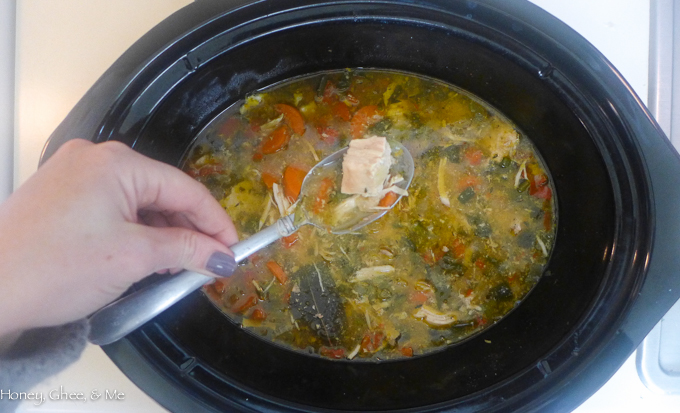 Taste and adjust flavors as desired 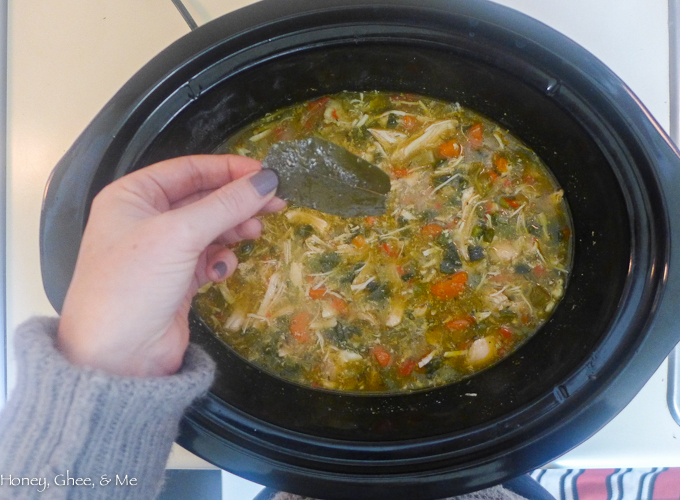 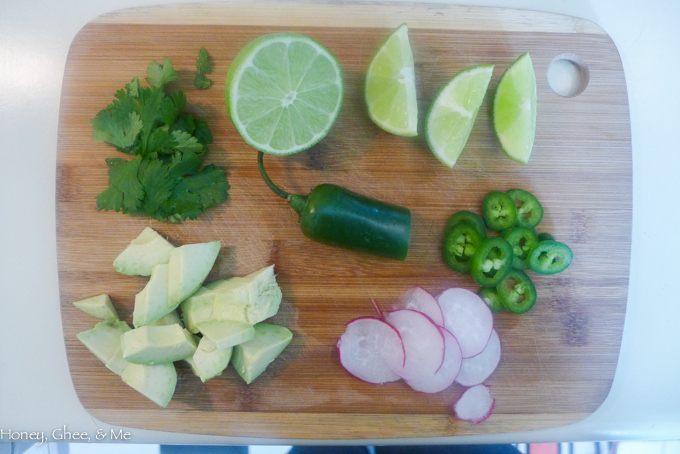 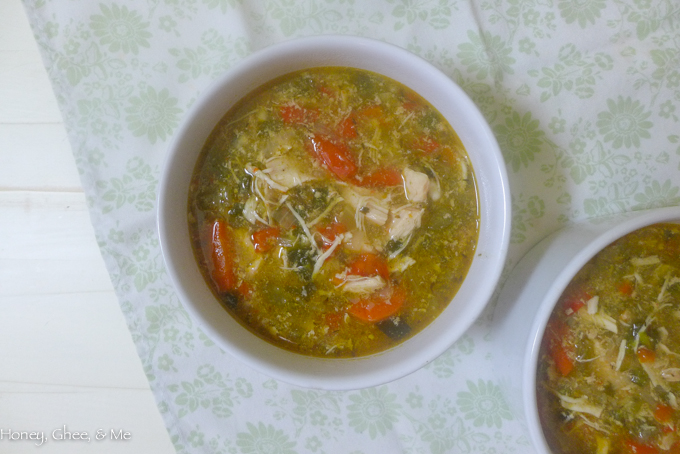 Top with goodies and dig in!

As with all soups, this guy makes great leftovers… those flavors will just keep getting better 🙂 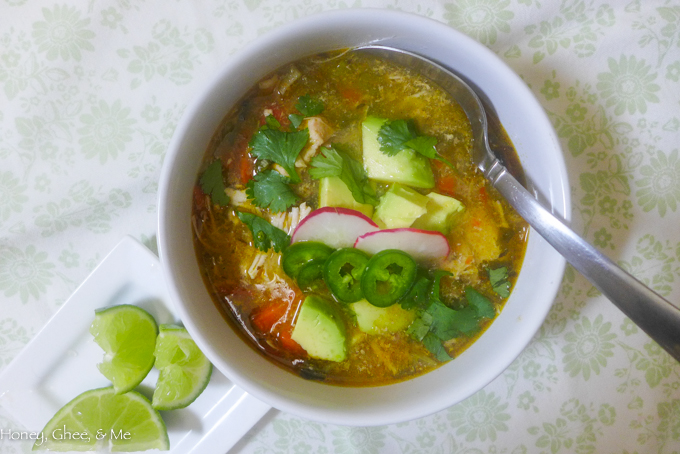