Nothing makes me happier than barbecuing.  Sunshine, no messy kitchen, charred goodness… it’s perfection all around.  I also happen to be a huge fan of condiments… dips, sauces, spreads, salsas- I seriously love them all.  The older I get, the more I enjoy making my condiments from scratch.  Not only is it pretty much guaranteed healthier, but it’s kind of fun to play around with flavors and challenge myself to see how close to the ‘real’ thing I can get.  This teriyaki sauce, in my little opinion, tastes just as good as any store-bought I’ve had, but has much higher quality ingredients.  Plus, it’s fun to adjust things according to how I feel at the moment- I wanted a gingery sauce for these cute little drumettes, so ginger-teriyaki it was. 🙂 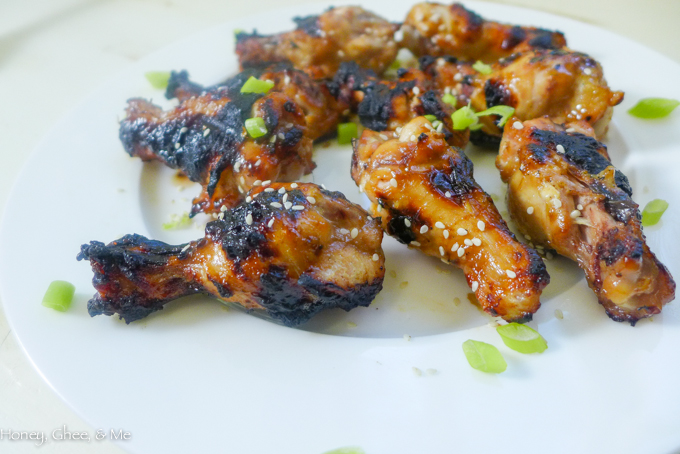 This meal actually manifested accidentally.  I was really wanting to bbq, and had a major craving for these pineapple-chicken skewers I’d made a few times before (see recipe HERE).  I had everything ready… the peppers, the pineapple, the sauce-makings, and the chicken.  Or so I thought.  Turned out, I’d brought home drumettes instead of breasts… sometimes I’m on auto-pilot at the market and don’t know what I’m doing!  Anyway, I quickly had to improvise.  So I deconstructed the skewers dish to make little drumsticks instead (drumettes are part of the wing- the mini little drumstick looking section) and a side of grilled veggies and pineapple.  It was perfect.  The greatest thing was that I ended up recreating the teriyaki sauce to be even better.  So while this dish happened by mistake, it was a very very happy mistake.  I perfected my sauce and got a nice spread of food out of it.  (The sauce on the skewers recipe has been updated to reflect the new tweaks… so go ahead, try either version of this dish- deconstructed or skewered!) 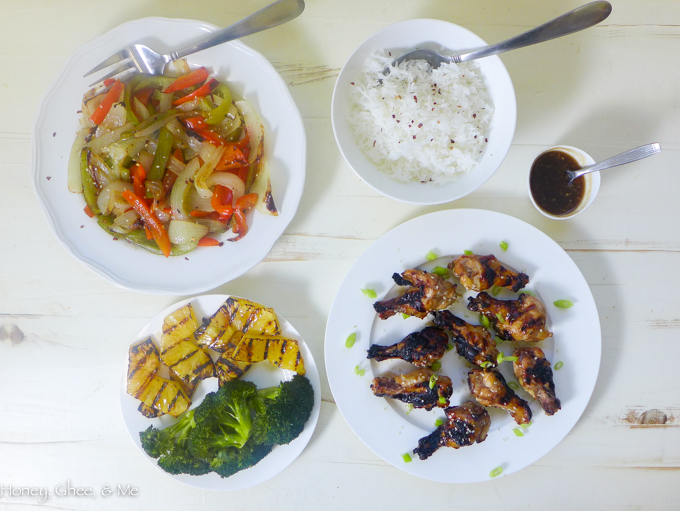 Drumettes are the perfect mini food.  They’re like drumsticks shrunken down to munchkin size.  If you want, you could use the whole wing…. who wouldn’t love teriyaki wings??!  Or ask your butcher to cut them into drumettes if they’re not already sold that way at your local market.  Want to totally stray from min and just use what you have?  No prob… thighs, breasts, drumsticks- they can all be done this exact same way.  Just alter the cooking time as needed. 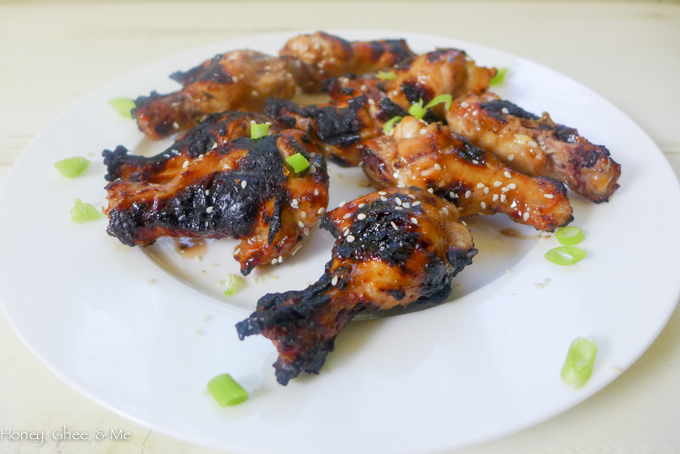 I actually just made this again last night… but used chicken legs instead.  I had three legs, so cut them into three thighs and three drumsticks.  Made the exact same sauce, slathered those guys up, and grilled them until charred and golden brown.  You could also use this sauce for teriyaki burgers, veggie kebobs, or whatever else you may want a little gingery-flair on! 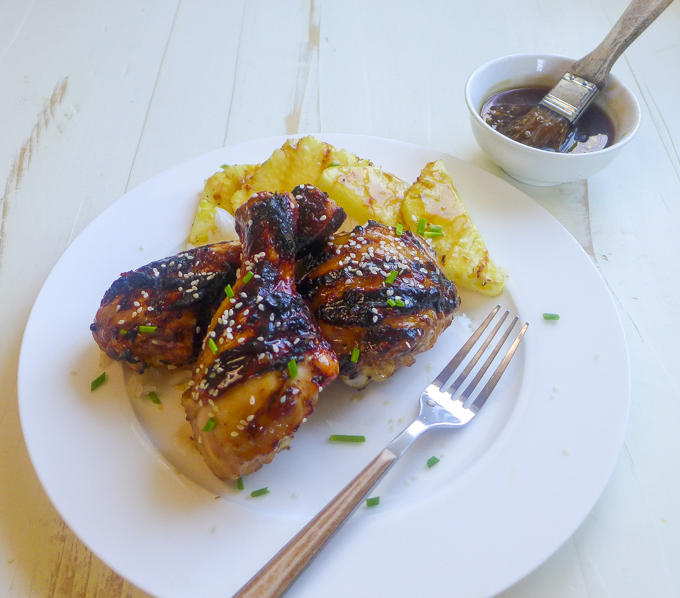 I’ve served these with rice and grilled veggies, and also over mashed cauliflower with grilled pineapple on the side.  You could also just make a ton of wings and serve ’em up at your next potluck or bbq gathering.  So many options… 🙂 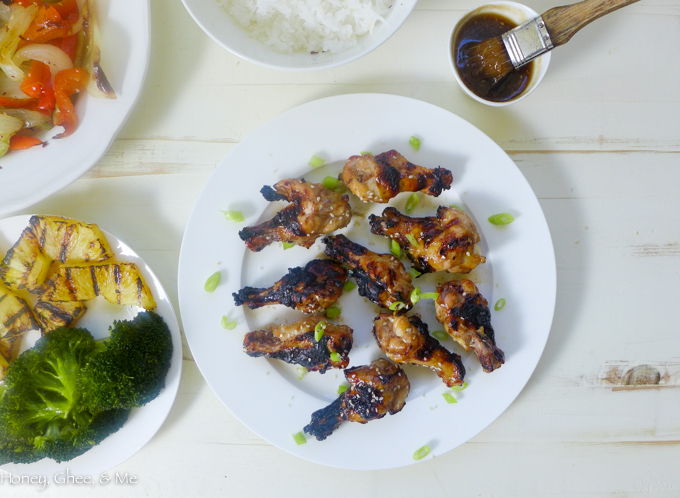 salt and pepper, to taste

half a pineapple, sliced

* If preferred, you could use tamari in place of coconut aminos if preferred, though keep in mind it’s a bit saltier.  Also, if you don’t have coconut sugar on hand, feel free to use light brown sugar or honey instead… just play around until you get it just how you want it. 🙂 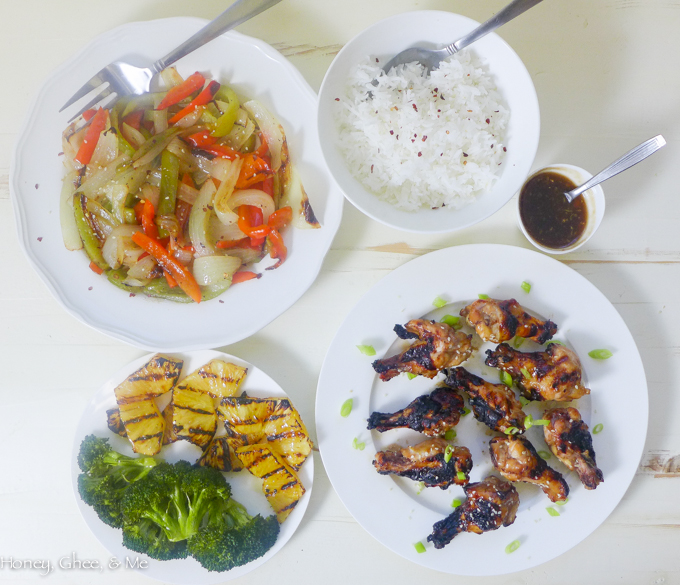 Start with the sauce…

and water-starch mix to a small pot over medium heat

Remove from heat- sauce will thicken as it cools

Taste and adjust flavors as desired

Let it cool a tad before adding to the meat 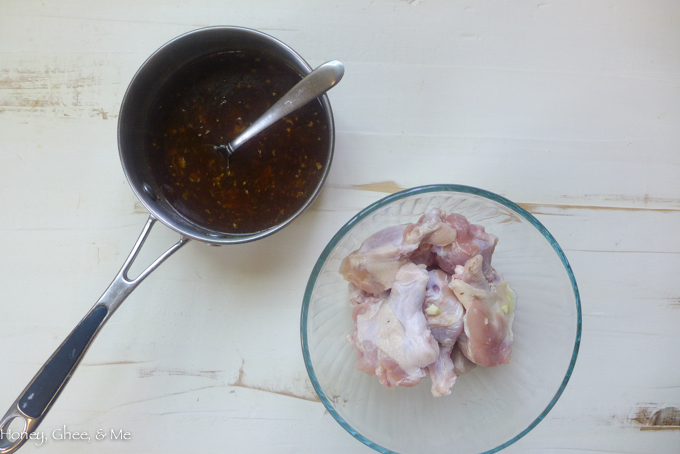 Sprinkle a little dash of salt and pepper over the meat 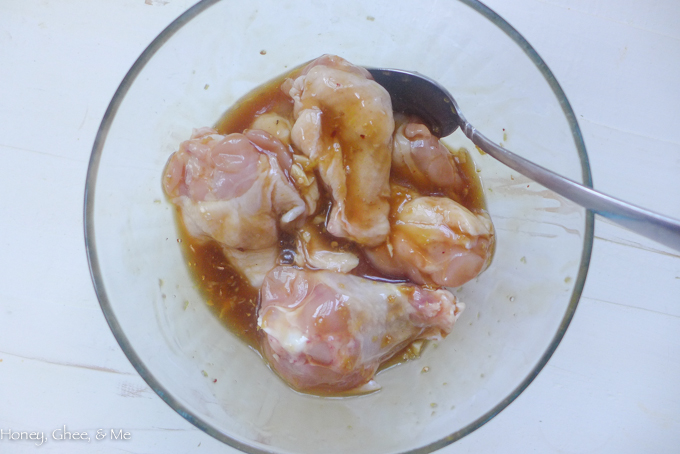 Slice the bell peppers and onion…

any way is fine- long strips, rounds, whatever you like 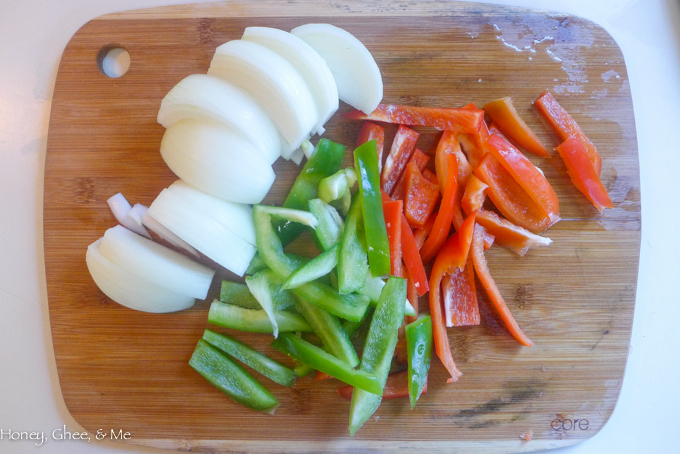 Lay the onions and peppers over a large sheet of foil

(or use a grill-friendly pan if you prefer) 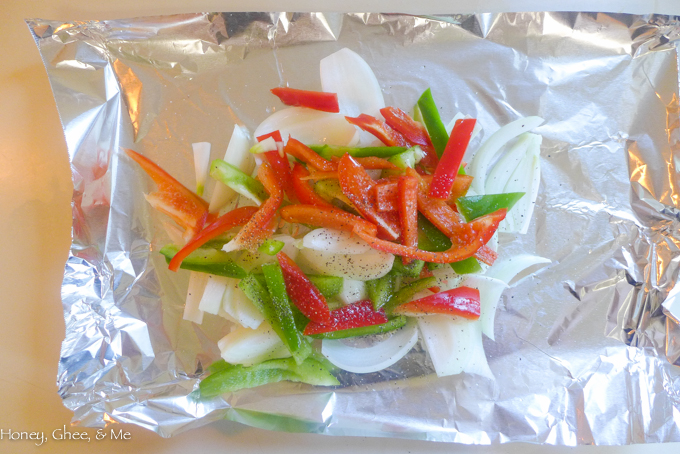 Toss to coat evenly, then wrap the foil tightly around the veggies, 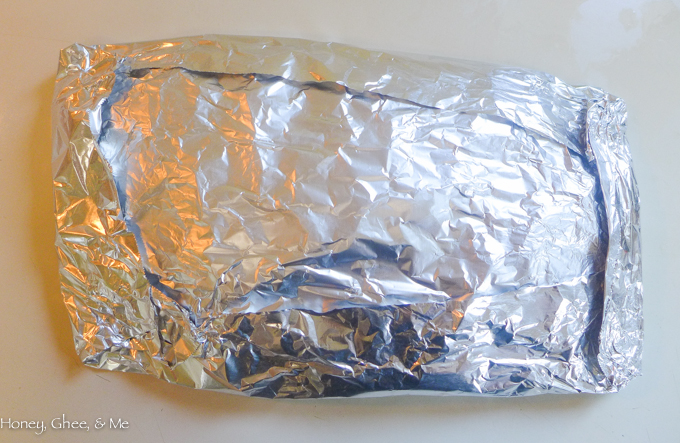 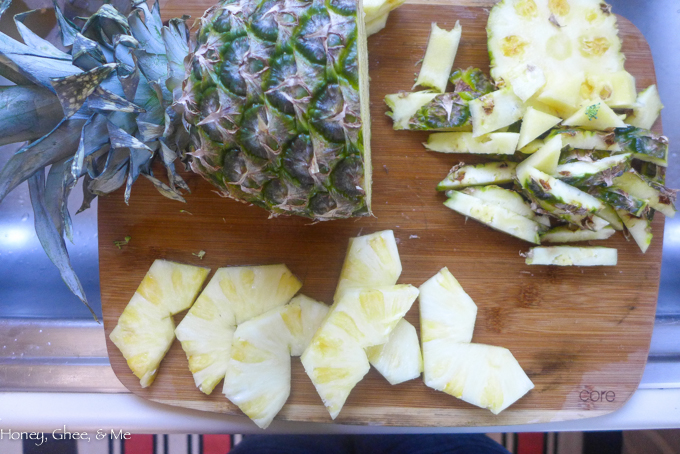 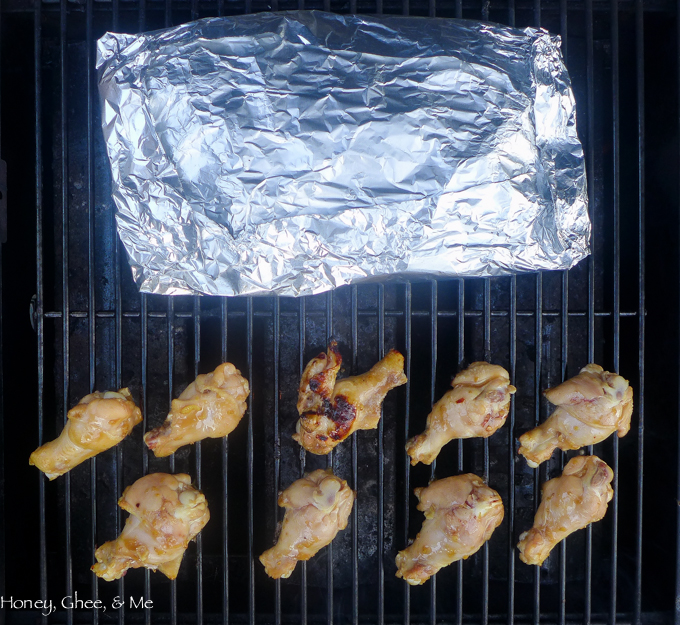 Every grill is different, so adjust the time as needed for yours…

After about 5 minutes or so, once browned, flip the chicken and veggie pack

Brush some more sauce over the chicken… I say the more the better! 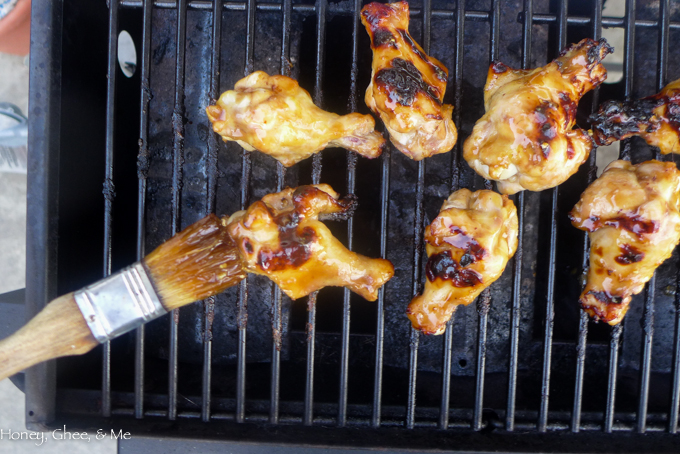 Just a few before it’s all done, add the pineapple slices 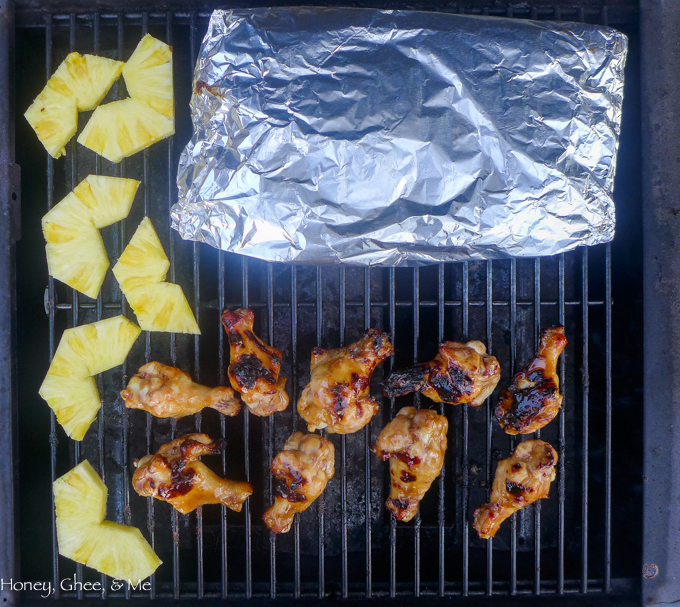 That’s it!  Load everything up and plate it…

Season the veggies as desired 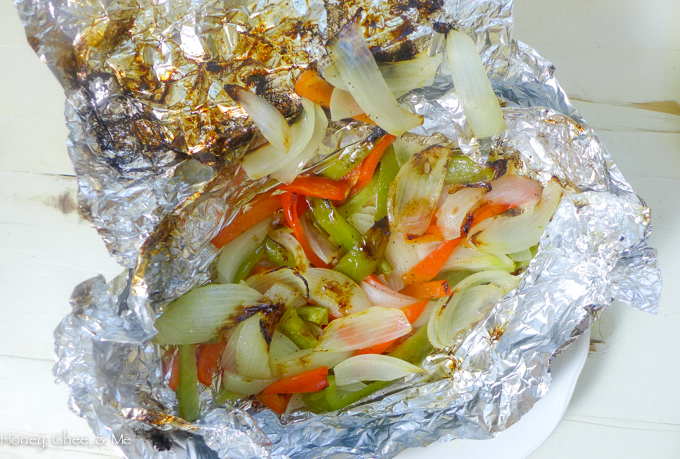 Give the pineapple a little brushing of sauce too… ’cause why not?! 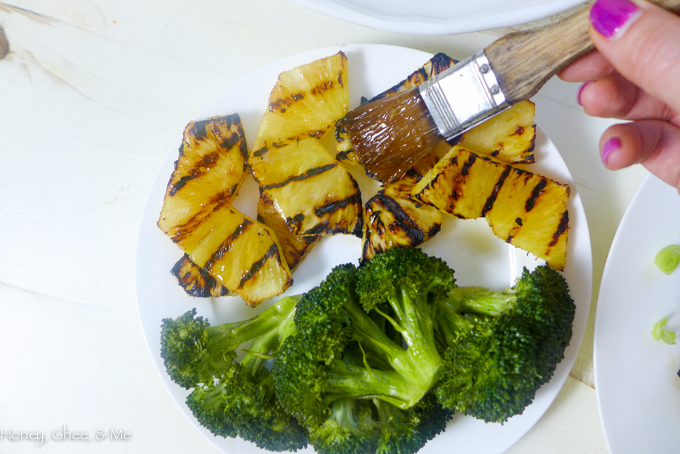 Give the chicken one last brushing of sauce and

sprinkle some sliced green onions and sesame seeds over it

Dig in and enjoy!