Caldo de pollo literally means chicken broth in Spanish… but it refers to a simple Latin American style soup made with broth, chicken, and veggies.  But, there’s something special about this particular style of chicken soup.  It’s classic.  It’s the chunky, rustic, super simple kind of chicken soup that never disappoints.  It’s not fancy, it’s not frilly, it’s just plain old chicken soup.  Which is why I love it so very much.  Whether sick, healthy, cold, warm, or just simply hungry… this soup is good ALL the time. 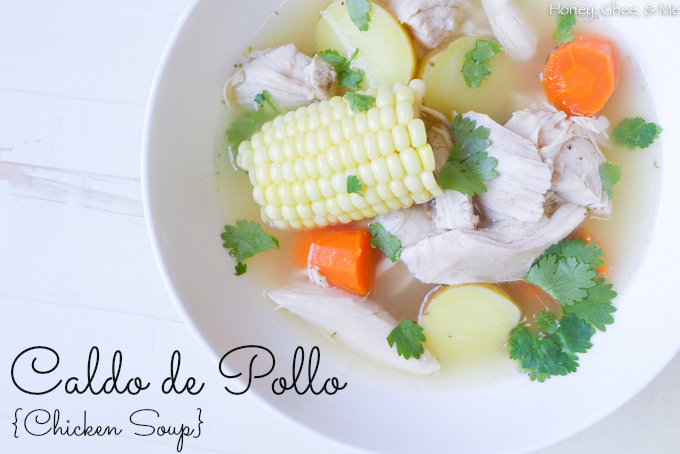 I make various takes on chicken soup often.  Chicken pozole, with that savory spicy red chile-infused broth.   Lemon chicken and rice.  Thai coconut and chicken.  The list doesn’t end.  But truthfully, there’s nothing I love more than a super simple brothy chicken soup like this.

What makes this Mexican classic so great is its simplicity- the rustic quality.  It’s just broth and some chunky carrots, potatoes, and chicken.  And of course corn if you want too.  I actually don’t do corn all too often these days, but in a soup like this, it not only adds flavor to the broth, but also emphasizes the rustic home-cooked style of the soup too.  I freaking love it.  (Note on corn: it’s one of the veggies you really want to get organic!) 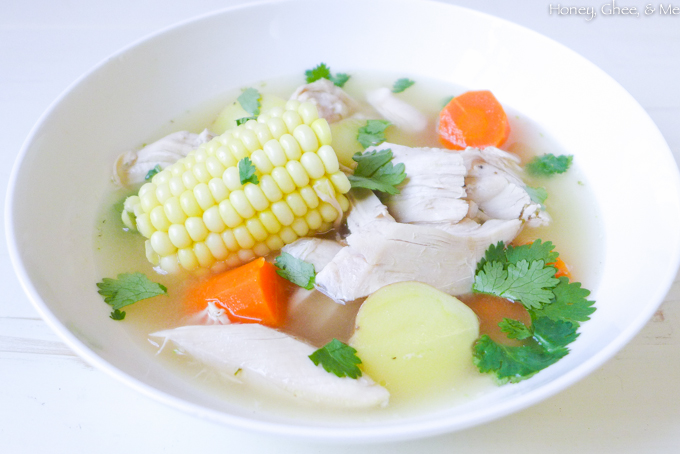 The key to any good soup is a good broth.  I make the stock as part of the cooking process, so not only is it all made from scratch, but it’s super healthy and fresh too.  So many nutrients come from cooking down the chicken… not to mention flavor.  But you need those bones!  Please, I beg of you, do not use boneless chicken for this.  Your belly- your whole body- will thank you if you don’t.  The bones are key.

You can prep the stock in advance if you’d like.  The longer it cooks, the more flavorful and nutrient-dense it’ll be.  But because I’m not always that organized, I tend to start this whole thing about 3 hours before I want to eat… I cook the stock down for 2 hours, then add the other stuff in for approx 1.  It works every time.  Every single time.  You just can’t mess this dude up.  And like all good soups, it’s even better as leftovers. 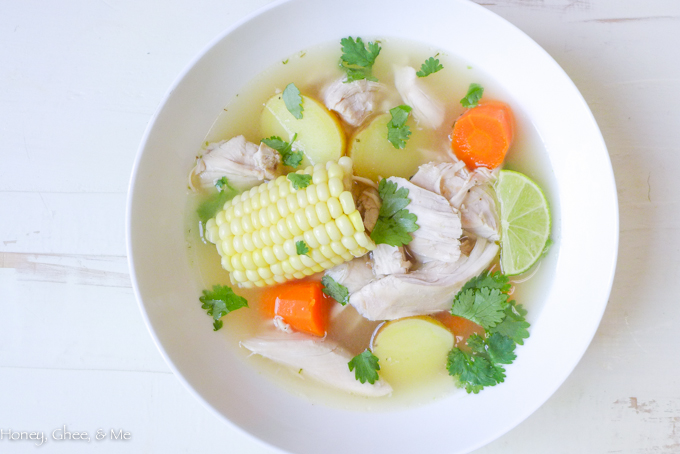 I purposely choose not to season the stock much… I believe something like a soup is best seasoned towards the end, once all of the flavors have been cooked down.  When you first taste your broth, you may not feel too impressed, but once you add the carrots, corn, lime, and salt, it’ll all come together.  You’ll see. 🙂 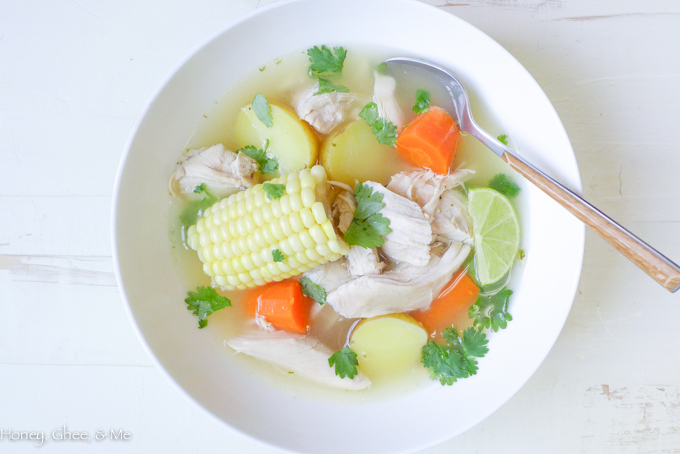 As you may already know, I’m a huge fan of garnishes.  I tend to keep it mellow for this soup though, because like I said, it’s the simplicity that makes it so darn good, but some lime and cilantro are a must in my opinion.  The avocado slices are just an added touch, not necessary, but I’m obsessed with avo so I put in on everything.  For a little extra kick, add some hot sauce or crushed red pepper too. 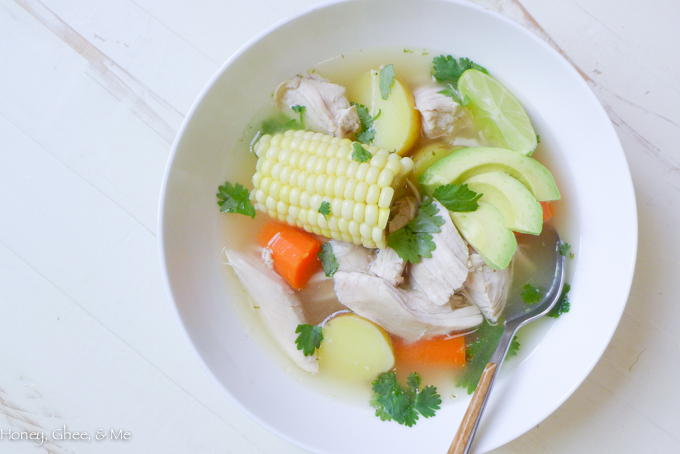 As you also may know, I love breakfast soups!  Either plain, or more often than not, with a fried egg plopped right on top.  It’s THE best way to start the day! 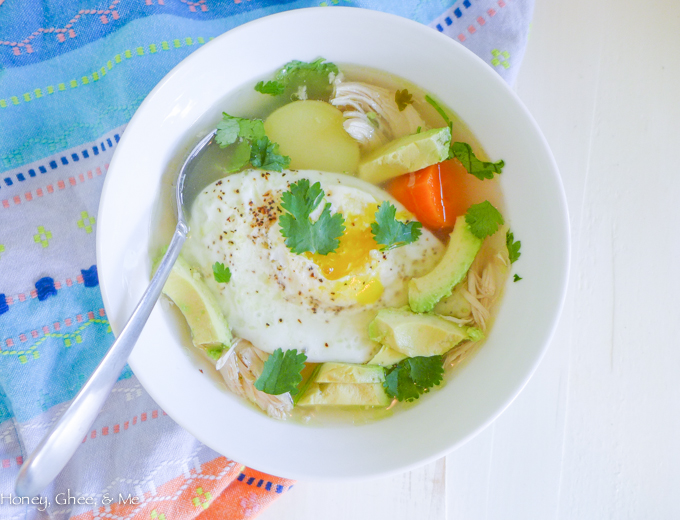 2 corn on the cob, broken into large pieces

cooked chicken, from above 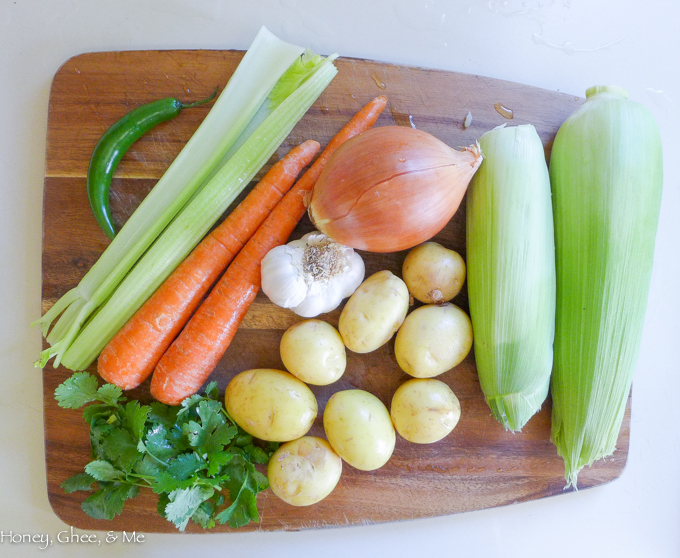 Smash the garlic cloves and Serrano pepper, whole with seeds and stem 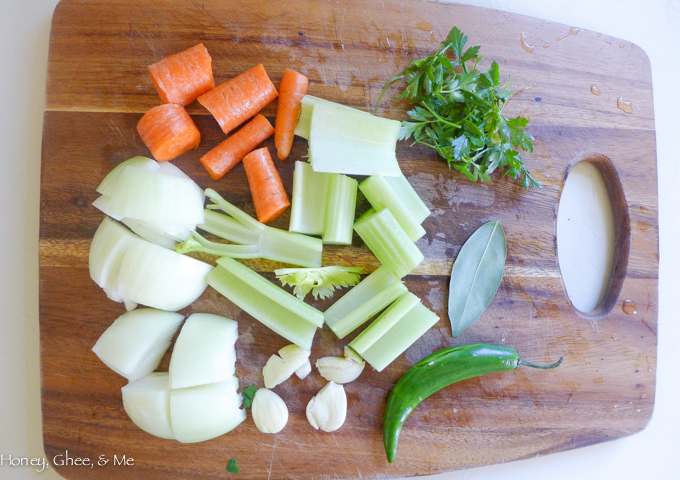 A note about chicken: you want skin-on and bone-in to make the stock…

there are so many nutrients packed in there, as well as flavor,

so as tempting as it may be for you, don’t go with boneless for this 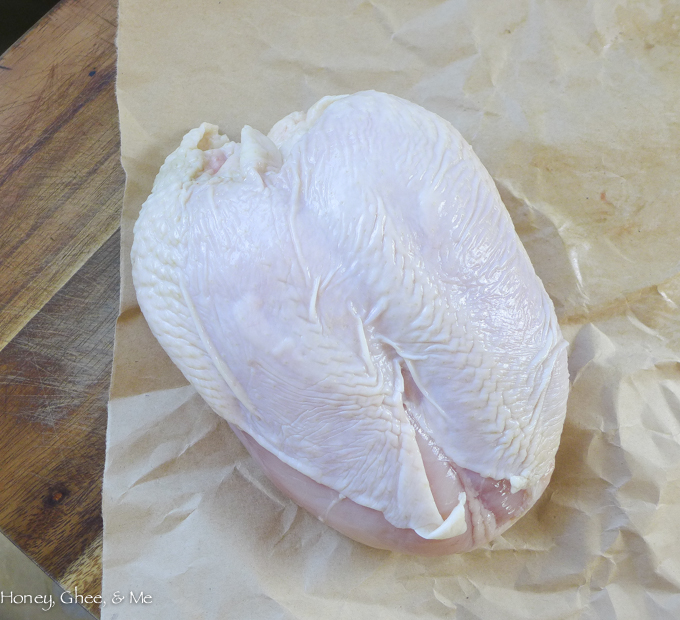 Cover and cook over medium heat

Once boiling, reduce the heat to low

Cook for 2 hours (the more the merrier when it comes to stock, but 2 works) 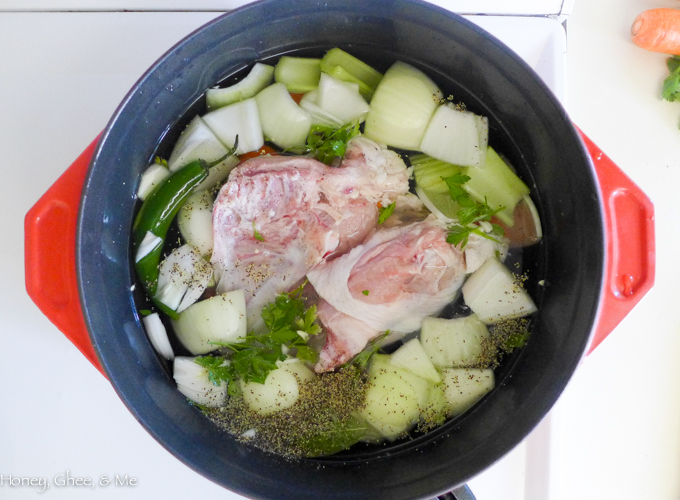 Things won’t look very pretty when you open that lid, but just ignore that for now 😉 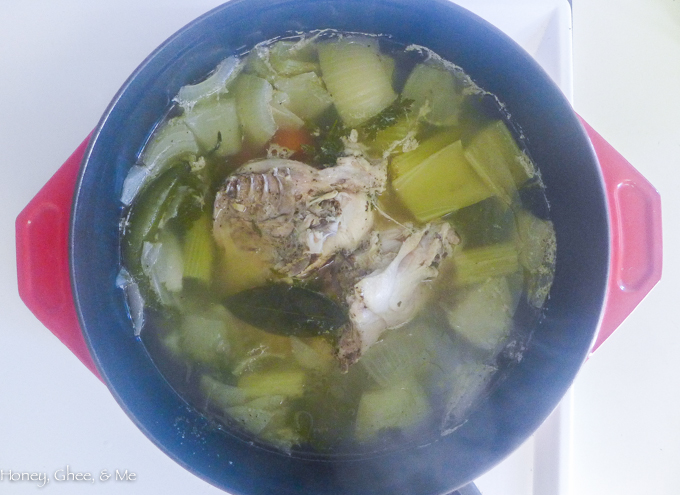 Using a small strainer or any other method you like, remove everything from the stock…

Scoop, sieve, strain, whatever works- you just want a clean broth in the end

Because it was hardly seasoned before cooking, it won’t taste like much quite yet…

by the time it’s done though, it’ll be tasty, just wait 😉 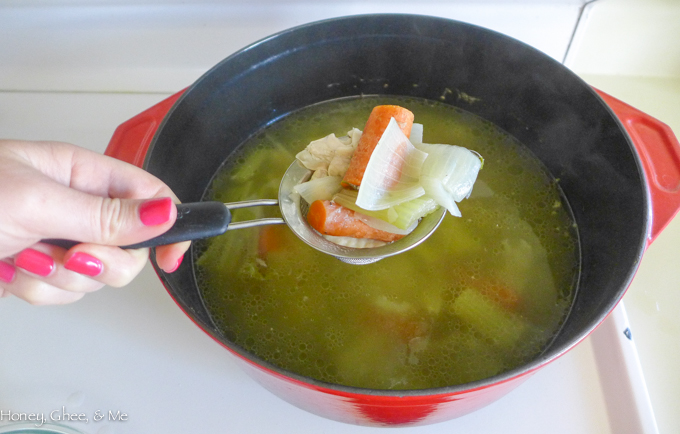 It’s always tough for me to let go of all those delicious carrot and celery pieces,

’cause I hate wasting food, but for the sake of texture and tasty veggies,

now that you have your stock… either save them for

another use (maybe a pureed soup another day?) or just toss them 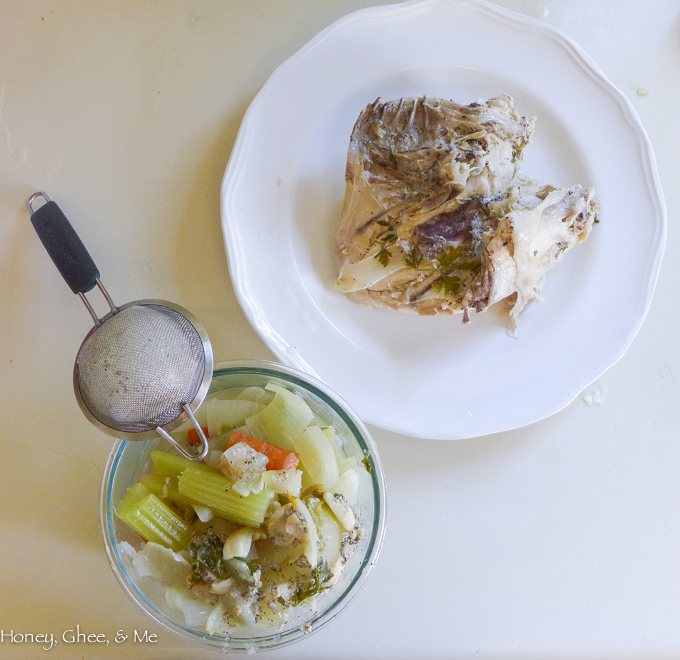 Roughly break apart the chicken using your fingers or a knife, making sure to discard all bones

For some soups, I prefer super shredded chicken, but for this soup, large pieces is best 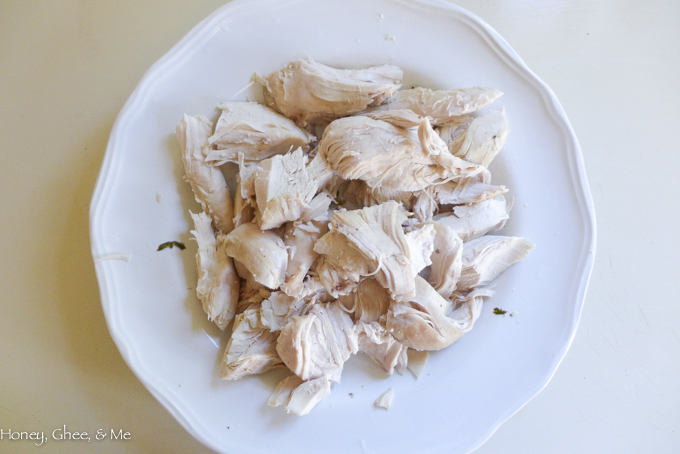 Husk the corn and break each cob into thirds

Slice potatoes in half and roughly chop carrots

Add the corn, carrots, and potatoes to the stock, along with salt and pepper

(The soup will need more seasoning, but it’s best to start light, then add on later)

Cover and cook over low heat for approx 45 minutes, until potatoes are cooked through 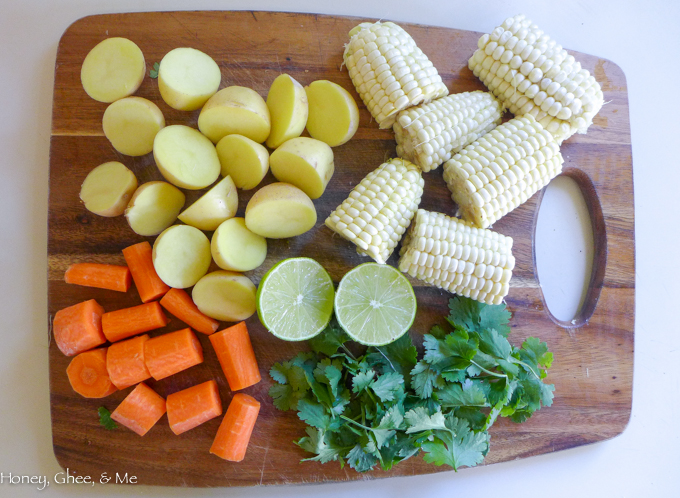 Once done, add the juice from half a lime

Add salt and pepper until it’s to your liking

Keep in mind, seasonings tend to get stronger the longer they sit 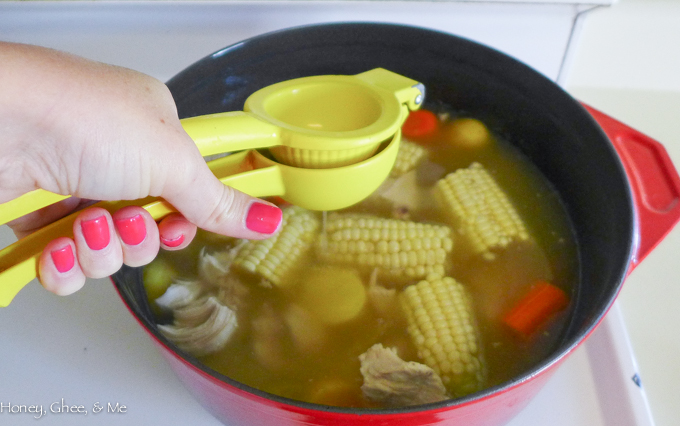 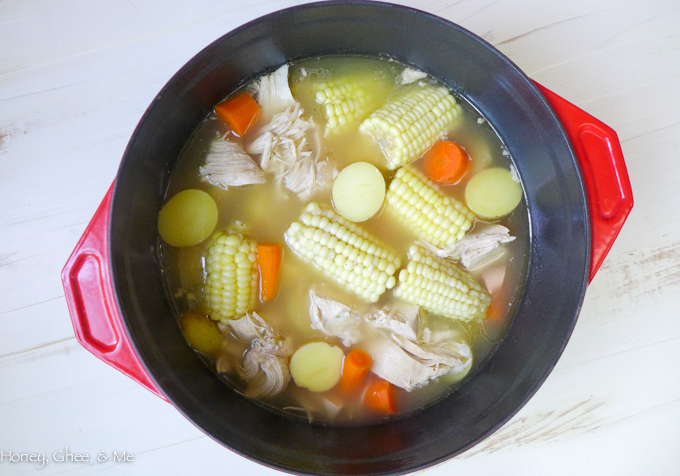 Prep any garnishes you may want… 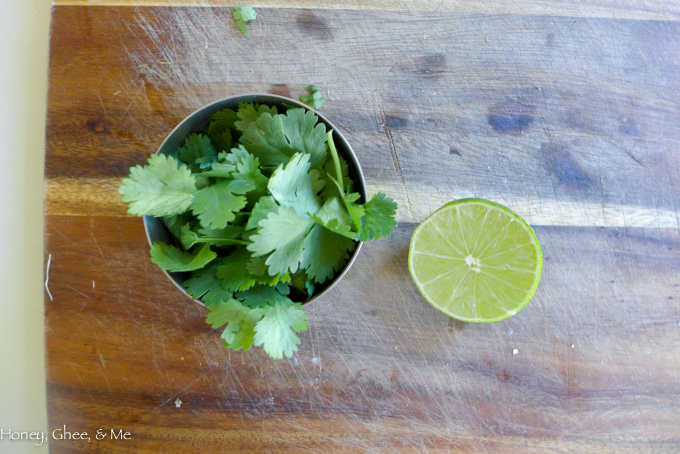 Ladle the soup into bowls… 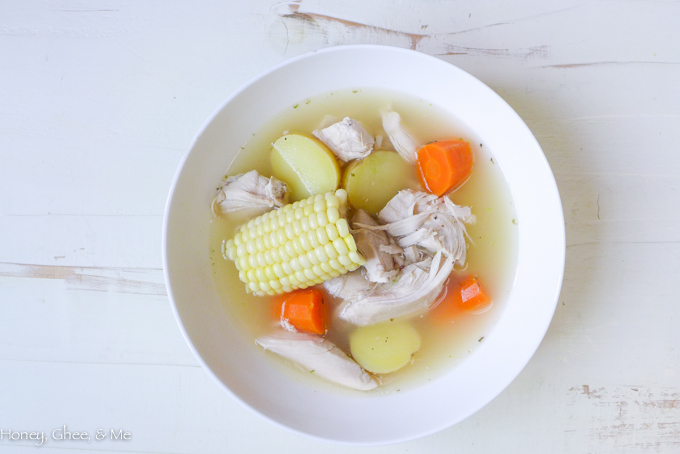 Sprinkle lots of fresh cilantro leaves over the top 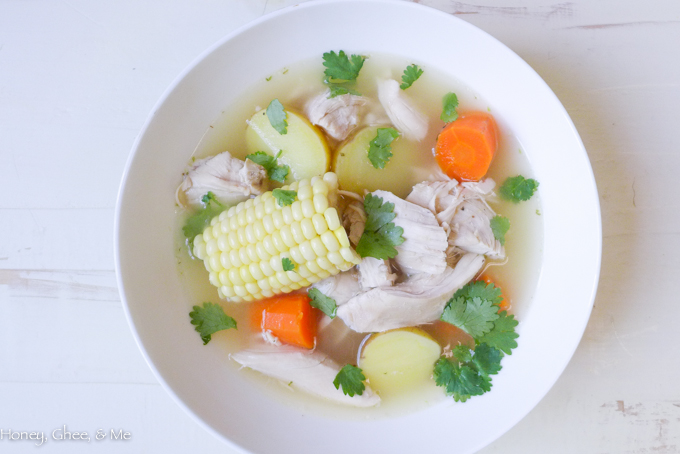 Top with lime, avocado, or whatever else you may want and dig in! 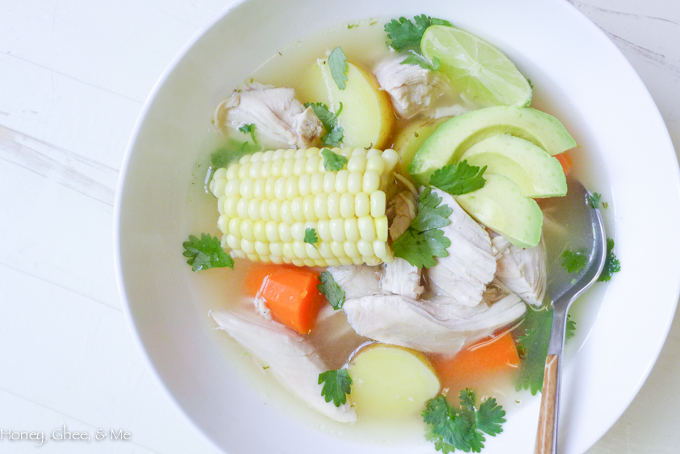