One of my favorite things about cooking is the experimenting.  There’s a mystery to it.  Will it work?  Will it be an utter failure?  Will my wild idea result in a massive oven explosion?  It’s the suspense of trying something random and new… it gets me giddy.  When things actually pan out as hoped, it makes both my heart and my belly smile wide.

This was one of those happy surprises.  I had no idea what I was doing.  I’d never made breakfast sausage before- I just woke up, had a craving, and knew what flavors I wanted to create.  So I walked into my kitchen and started crafting up a little blend I thought might taste good, knowing it could go any which way.  But to my happy surprise, it was exactly what I’d wanted.  I’d expected a few go’s at it at least, but it was spot-on the very first time.  Whoa whoa.  I nibbled about five more before officially settling on the fact that I’d succeeded… you know, just to make sure.  😉

Since, I’ve been whipping these little breakfast links up like a madwoman.  I love the sweet-spicy blend of these guys, but by all means play with the flavors if you want!  There are no rules.  ♥ 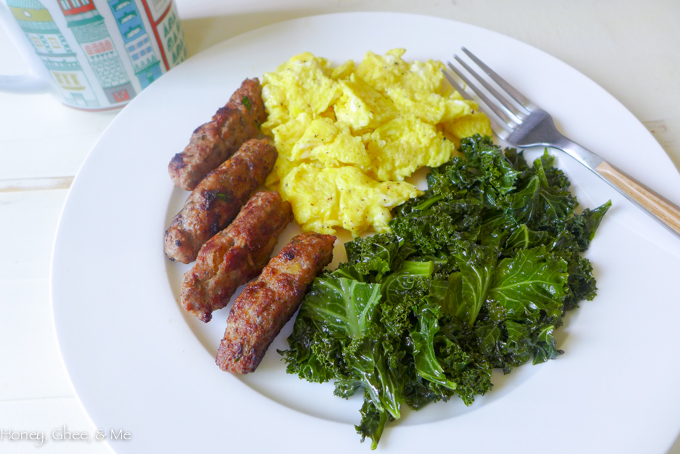 I know little about real sausage-making… which is probably why I’d never attempted them before.  I’d wrongly assumed some skills were needed… at least some sort of fancy machinery or something.  Of course if you’re wanting legit sausages, with the casing and all, there may actually be some rules, but for little handmade links, it’s shockingly easy.  Think of them as long meatballs… no one’s intimidated by those!

Start with your meat- I went with turkey, but you could certainly add in some pork if you wanted, or chicken too.  (Keep in mind pork tends to be a bit saltier.)

Decide on your flavors- I wanted an herby flavor with a little heat and sweet.  I chose fennel and sage, because those create the classic sausage taste, along with some allspice, nutmeg, and cayenne for a little spice.  I wanted to keep these ‘clean’ and light, so rather than sugar or honey, I diced up some apple to sweeten them up instead- once cooked, it’s adds not only sweetness, but moisture and texture too.  The smoked paprika, well that’s good in just about everything.  It can do no wrong in my eyes. 🙂 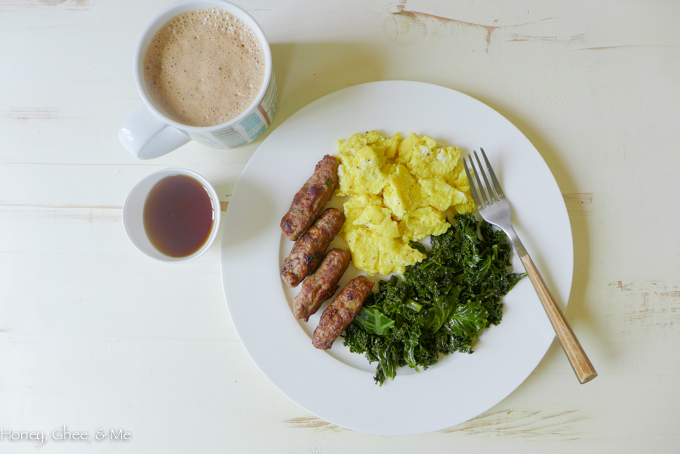 I wasn’t sure at first which I wanted- sausage patties or sausage links.  So I experimented and played around.  While they both work fine, I personally like the links.  🙂 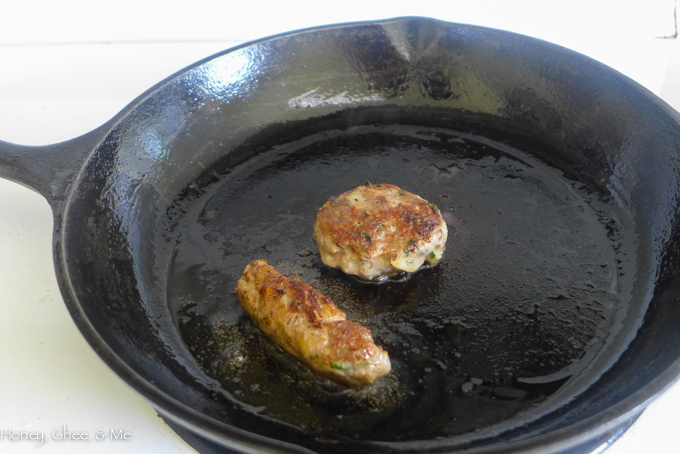 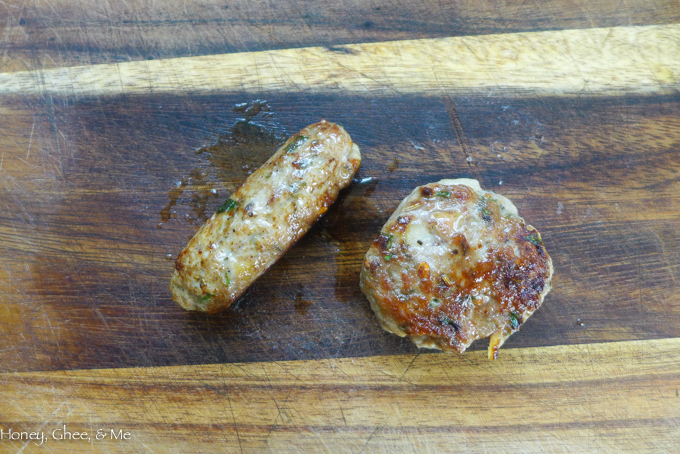 Little links go well with everything… waffles, eggs, veggies, and taters.  This batch was made with a side of simple scrambled eggs and sautéed kale.  And because I’m the weirdo who loves all my foods to merge, I warmed up a little maple syrup and drizzled it over the sausage, knowing it would end up making its way into my eggs and kale too.  I know I know, some of you are total compartmentalists who like everything perfectly separate, and you’re probably disgusted that I did that right now.  But not me, I like when foods marry. 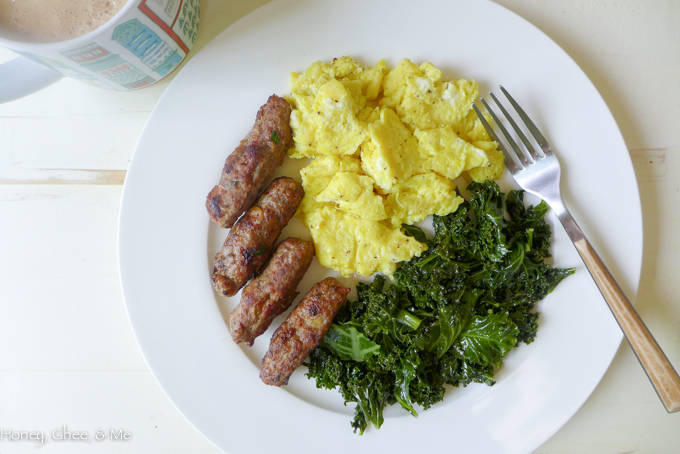 This recipe will make approx 15-20 links, depending on their size of course.  I love them little… everything’s cute when it’s small. 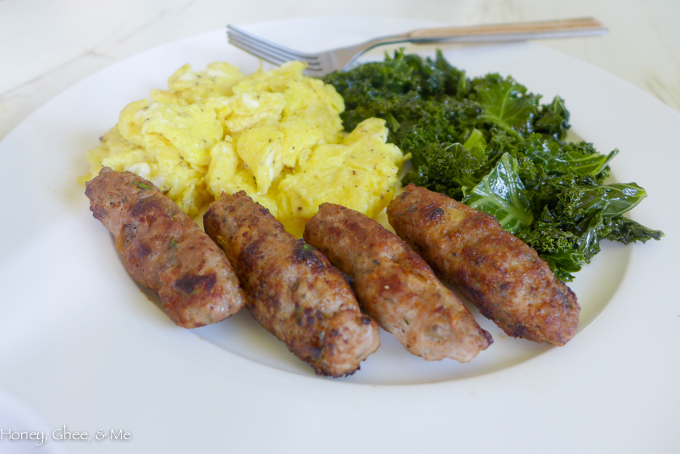 What you see in my mug there is my morning obsession: coffee and coconut oil.  Those who know, know, but those who don’t are usually totally weirded out by the thought.  Blend hot coffee and a teaspoon or so of coconut oil together in a NutriBullet for two or three seconds and boom, you’ll have a perfectly foamy delicious latte-like coffee in your hands.  It’s true.  It makes coffee fun with no need for cream or sugar whatsoever.  Plus, they say it’s super good for your brain and body too… and I like that.  ♥ 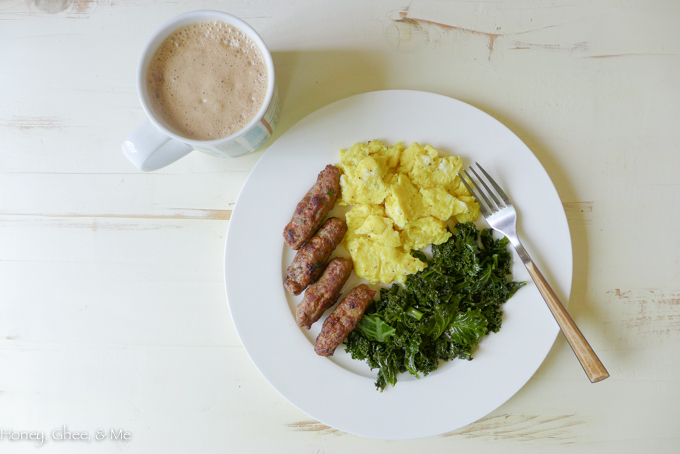 What I love about this recipe is that, as someone who has a pretty stocked selection of seasonings on hand as it is, all I need from the store when I want to make these is one apple and some turkey.  The rest is found in either a pot on my porch (the parsley) or on the seasoning shelf by my stove.  If you don’t have some of these on hand already, the good news is you’ll be sure to use them again in the future! 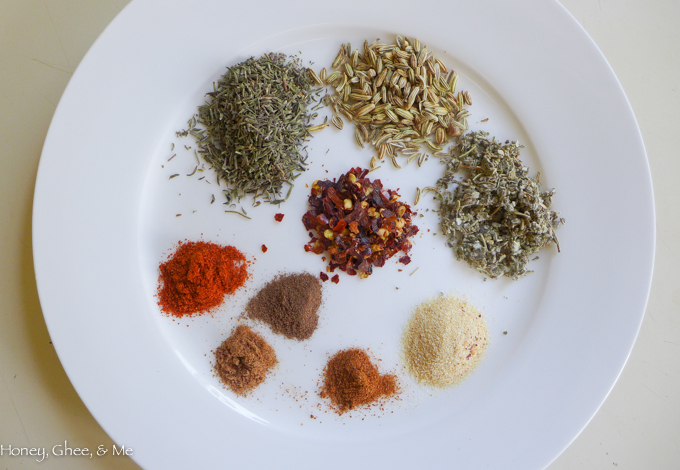 1/2 cup diced apple (any sweet variety, I use Fuji)

*Note: These amounts make a fairly spicy sausage!  If you prefer less heat, use half the amount of red pepper flakes and cayenne, or omit completely for no heat at all… please keep in mind that omitting will make the flavors more bland, so adjust as you see fit 🙂 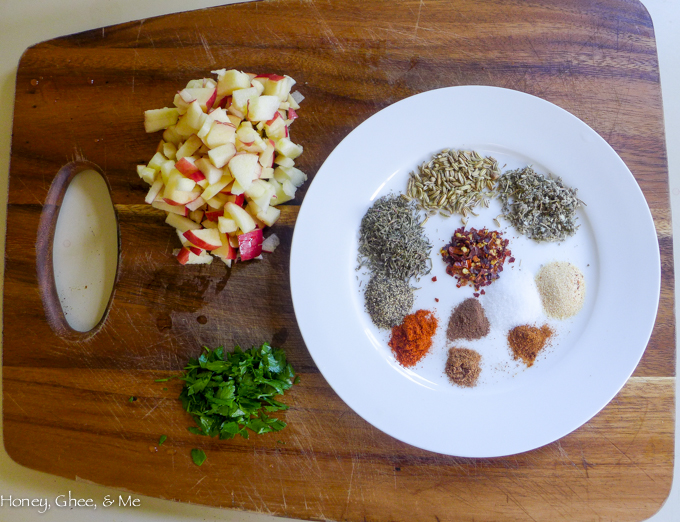 Add all of the ingredients, except turkey, to a mixing bowl 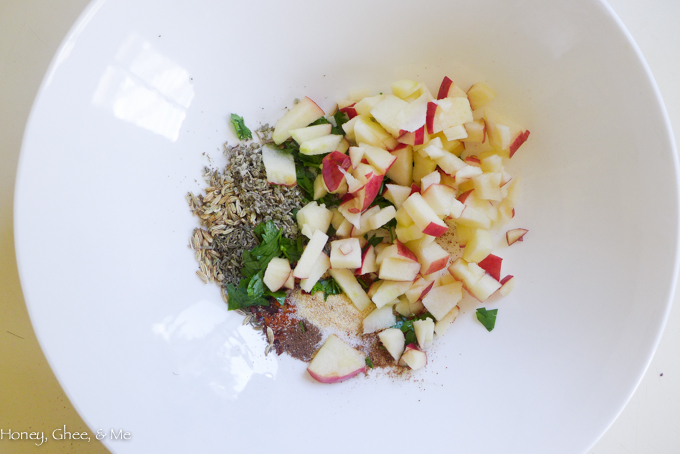 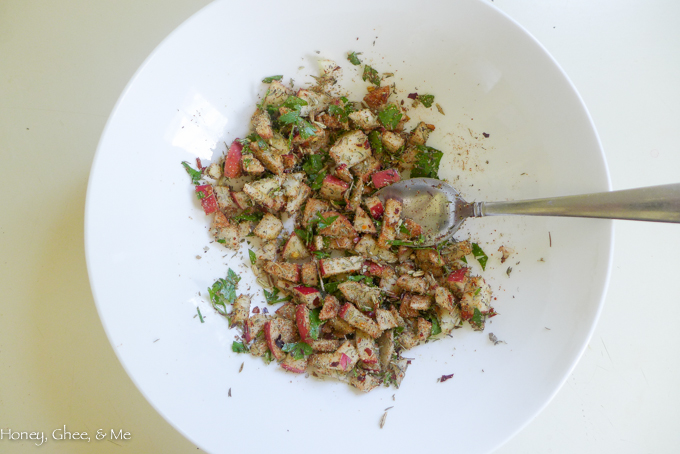 Gently mix everything together, being mindful not to overhandle the meat 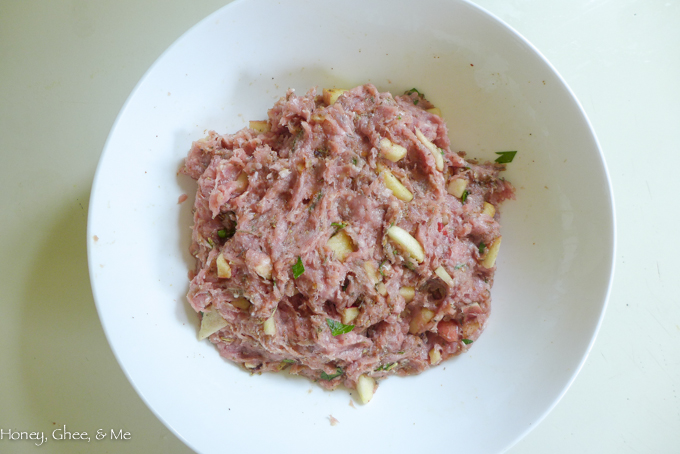 Approx 3 inches is good… they’ll shrink as they cook

(If the meat isn’t rolling easily, it’s possible it needs to chill for a bit to get to room temp) 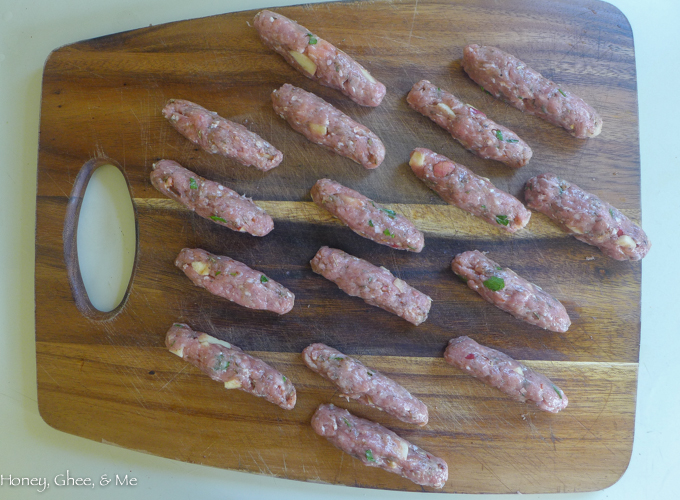 Completely coat the bottom of the pan

Once hot, add the links (to avoid overcrowding the pan, I do this in batches)

Watch out for splatters 😮 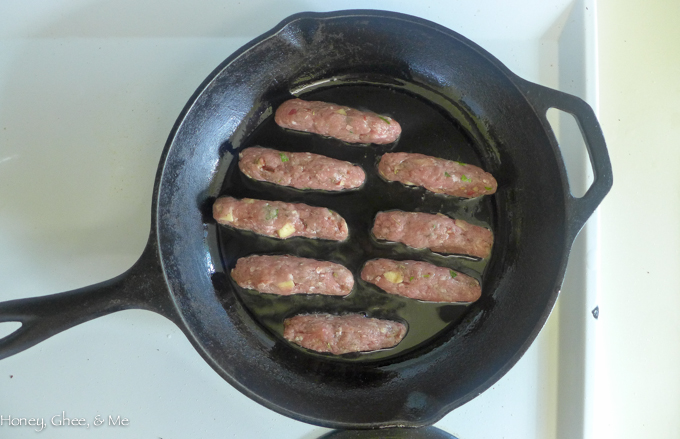 Cook the sausages a few minutes on each side,

rolling periodically to get all sides browned

It should take approx 10 minutes to cook them entirely

(Every stove is different- if yours are too brown or not browning fast enough, adjust the heat as needed) 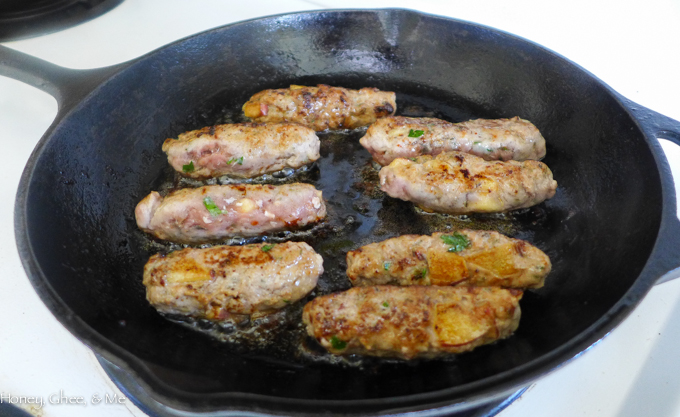 Lay sausages on a paper towel to cool 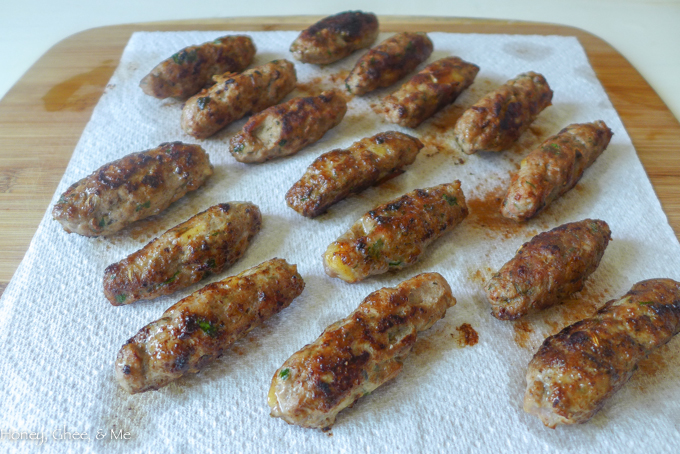 While they’re probably good to go, it’s always wise to slice into one to make sure…

raw poultry is no no bueno.

As with any meat, it’s good to let them rest for a few minutes before devouring 🙂 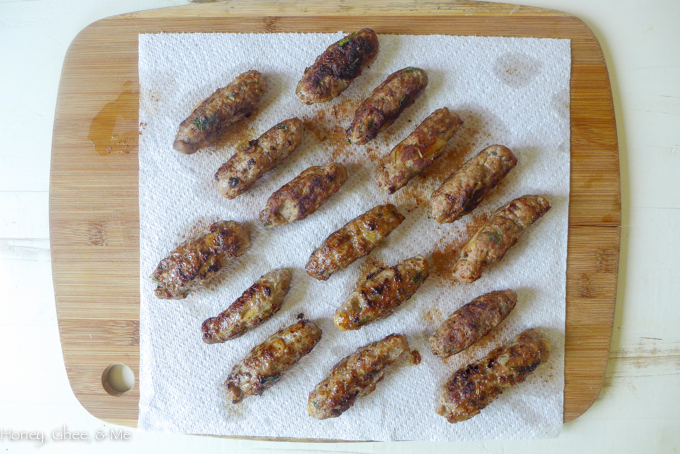 That’s it… serve with whatever you like and enjoy! 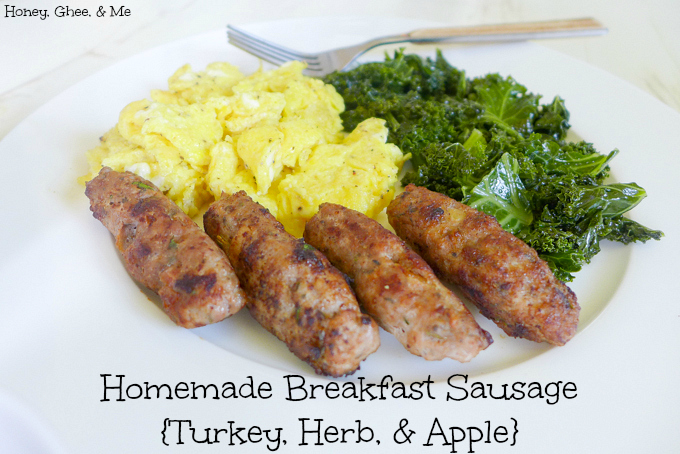