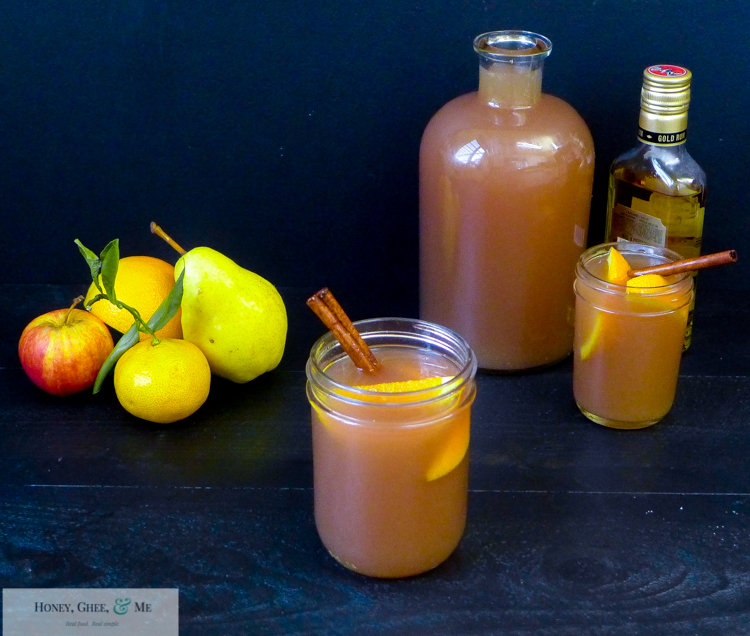 Nothing, nothing I tell you, beats the goodness of homemade cider.  I drink the stuff all fall and winter long.  Often, I am lazy so just heat up some apple juice, then add some cinnamon and nutmeg and call it good.  And when reaaaally lazy, I’ll just buy the stuff premade, plop it in the microwave, and go cozy cider crazy.  But most the time, I find myself wishing I had it homemade.  Straight from the fruit.  Yes, it’s more tedious. Yes, it takes time.  And patience, and an antsy groaning belly, and more time… but it’s worth it.  If for nothing else, just to say you’ve made cider completely from scratch.  A feat if you ask me… your friends will be impressed.  😉

Pssst, this ain’t your hard cider type of cider.  It’s mulled hot apple juice cider.  I know that gets confusing ’cause in much of the world, cider is the sizzly boozy stuff, which I love dearly by the way, but this is not that.   It’s freshly made fruit juice spiced and flavored that you can drink solo hot or cold, or with a splash of booze.  Perfect for any chilly eve.  The other kind of cider will come one day… dying to venture into that cider land soon too. ♥ 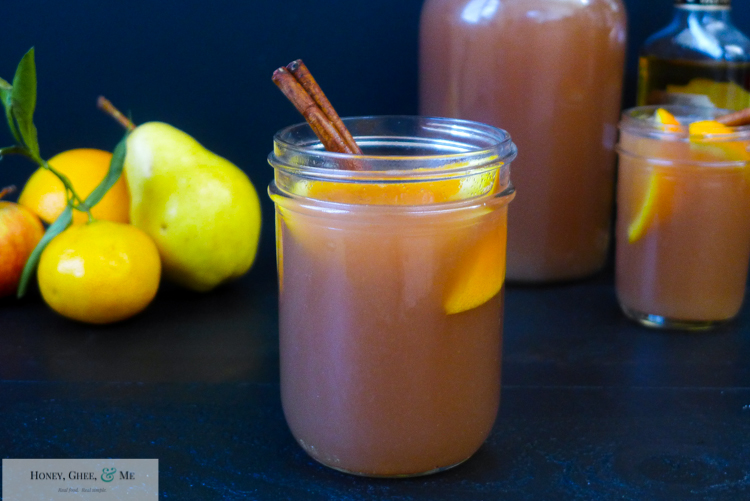 The fun thing about homemade is you can flavor it as you wish.  Want it more on the pear side than the apple, cool, add more pears.  Want it gingery?  No prob, ginger it is.  How about something random like pomegranate or cherry… sure, throw them in too.  Play around.  I actually started with a simple apple and pear, but in the end, decided suddenly that pomegranate would add the tart sweetness I spontaneously craved.  But now that I said it, cherry would be amaaaazing too.  That just may have to be my next cider fixin’. 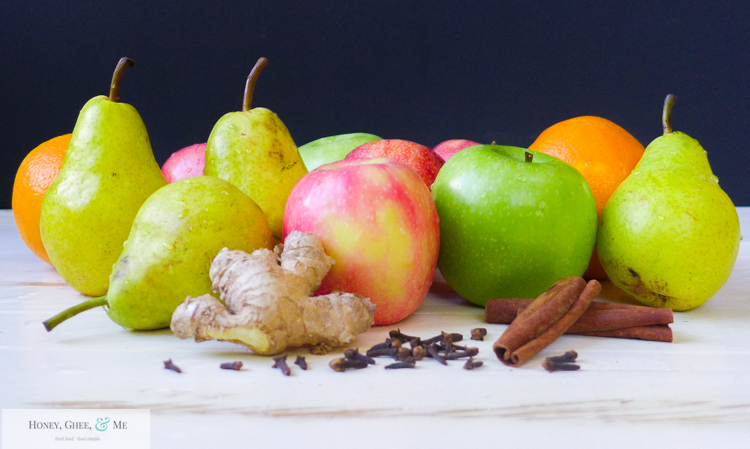 A couple years ago, I posted a recipe for an apple-cranberry mulled cider (here).  It too was tasty, but I just mixed some juices and threw in some spices… an easy option for those who want one.  This, however, is the real deal.  Whole cloves, fresh ginger, fruit off the tree… it just doesn’t get more homemade than this when to comes to cider.  Of course, I wouldn’t judge you if you just decided to use some apple, pear, and pom juices too.  😉

I saw a pic in some magazine of cider, with a heap of fresh fruit sitting behind it.  It made me wonder, why had I never made cider completely from scratch?  Why is this not something we do?  Is it just the convenience thing…?  So I went for it.  I’ll admit, the store-bought stuff is tasty and clearly, much quicker, but this is a fun twist- a great way to get into the holiday or winter spirit! 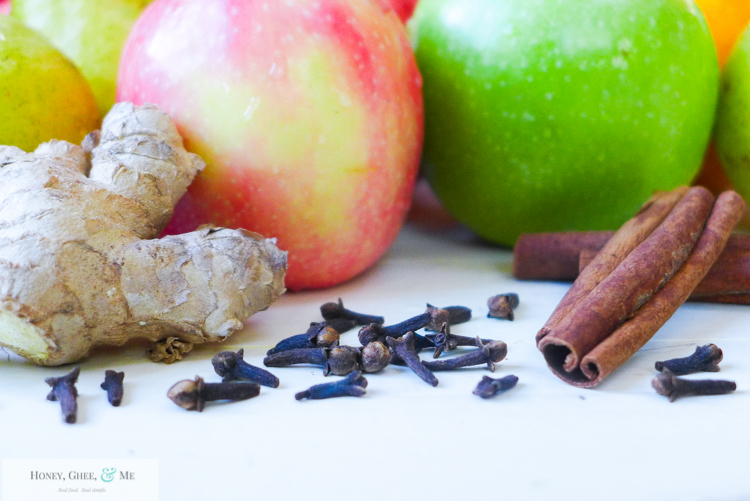 As with any cider, this puppy is grand with a little splash of booze.  Be it rum, brandy, whiskey, or wine, this guy is tasty tasty with a little fun added in.  Hot and cozy, on a cool winter’s day… sigh, perfection. 🙂 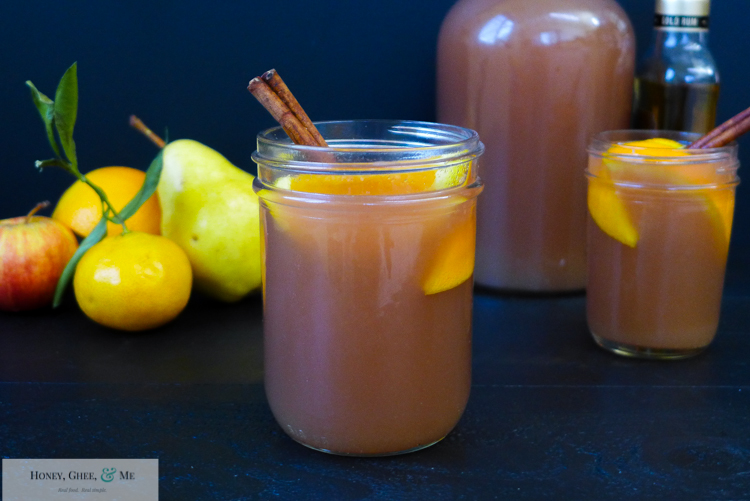 But of course, booze aside, it makes a nice little iced or hot sober sippy too… a versatile bev, that cider. 🙂 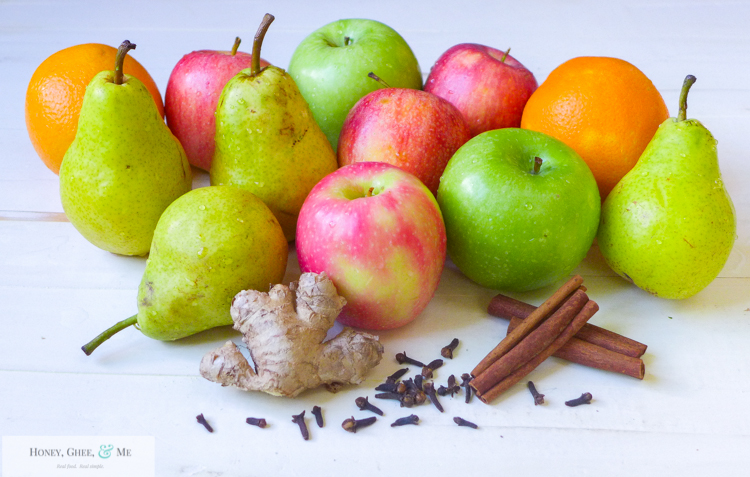 1/3 cup sweetener (I use half honey, half maple syrup), plus more as wanted

*you’ll need a large Crock Pot for this- 6 quarts or bigger- or you can make this in a giant pot treated a as slow cooker. 🙂 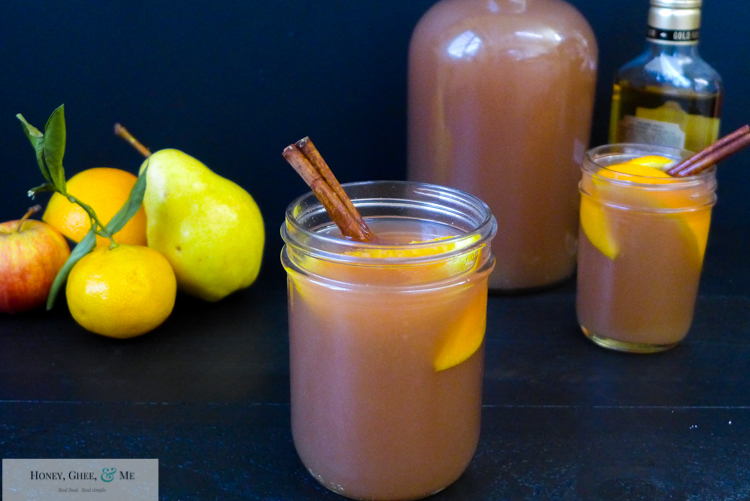 Quarter the apples and pears, then remove the seeds and core area

Slice and peel oranges, removing as much pith (white skin) as possible

{Note: you will be straining everything at the end, so technically all can remain in there, however some people have concerns bout the cyanide in apple seeds, so I remove them.  Also, orange peels and pith tend to be bitter, which is why I remove them as well.} 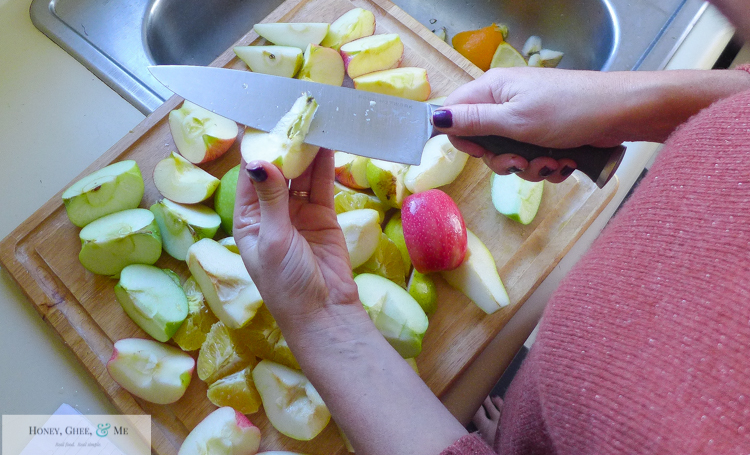 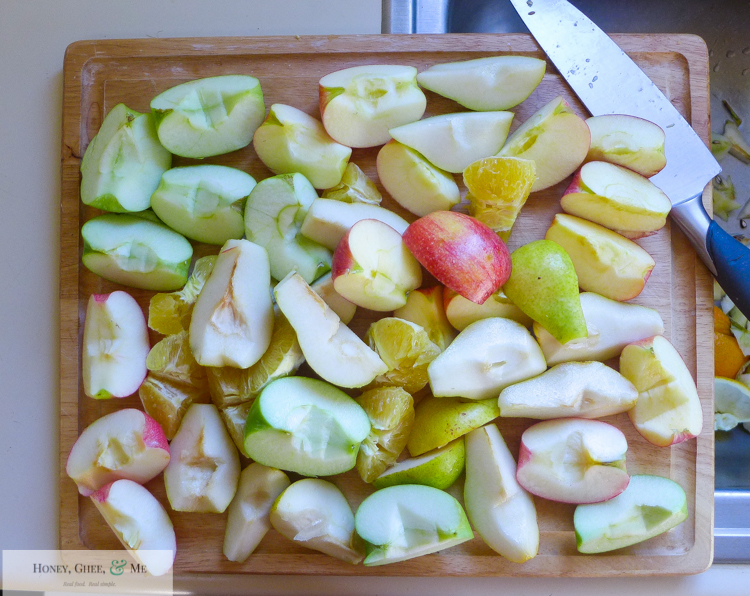 If you don’t have fresh, use 1/4 tsp ground instead 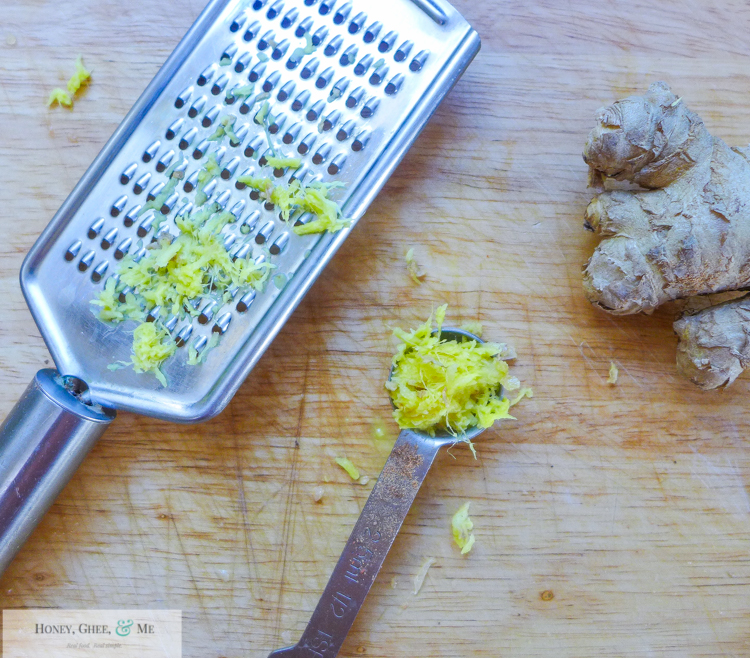 Add everything to the Crock Pot except the pomegranate seeds 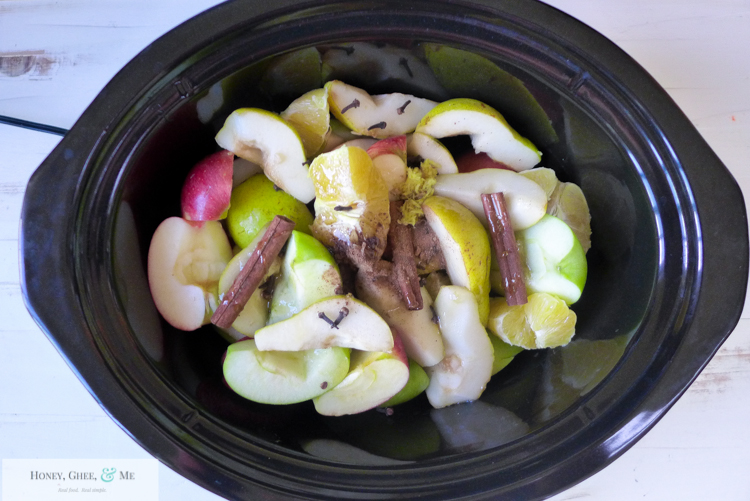 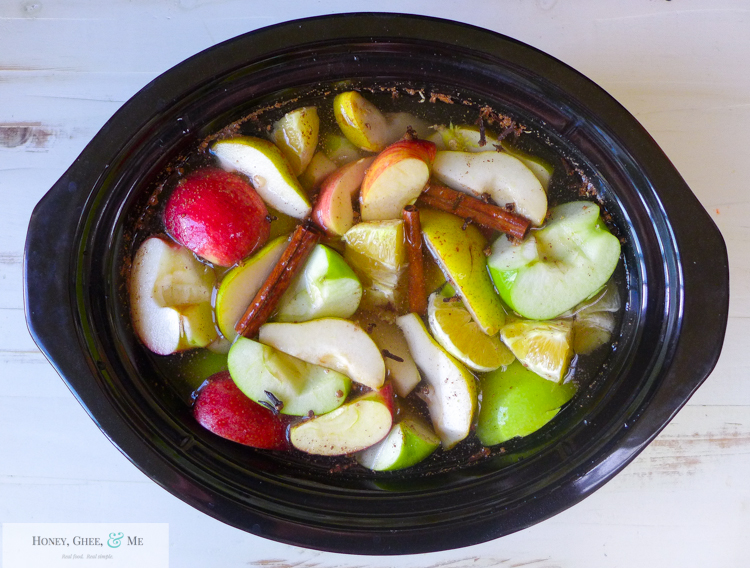 Set on high for approx 3 hours 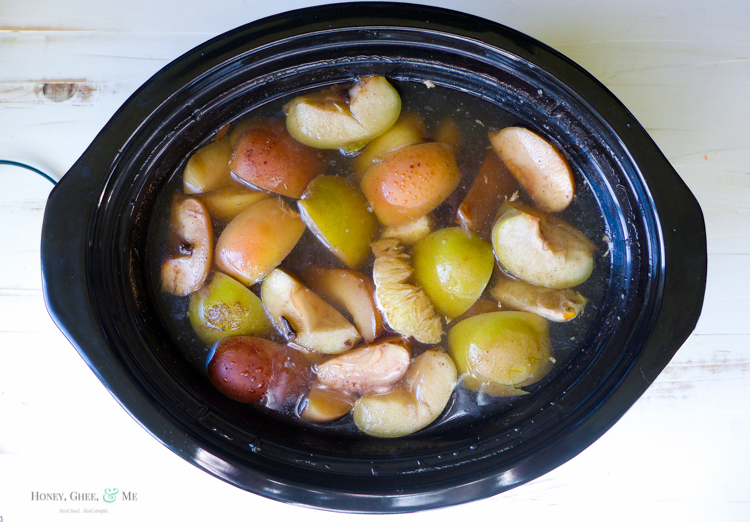 After a few hours, the fruit should have cooked and softened

Using a potato masher or other tool of your choice, smash all the fruit 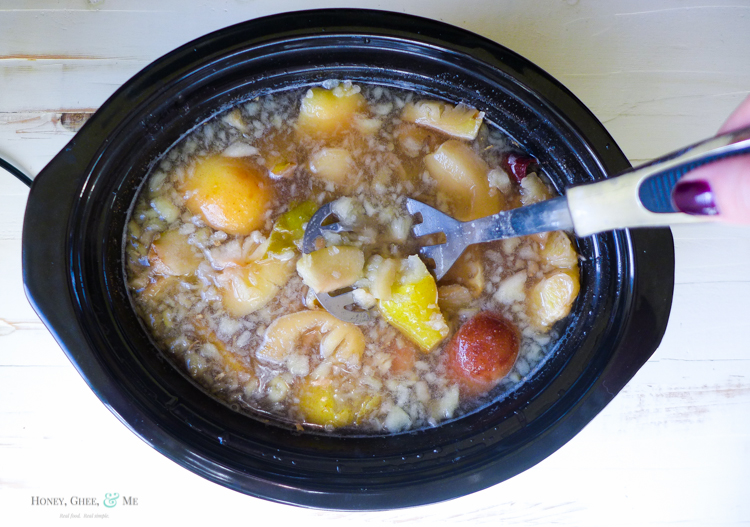 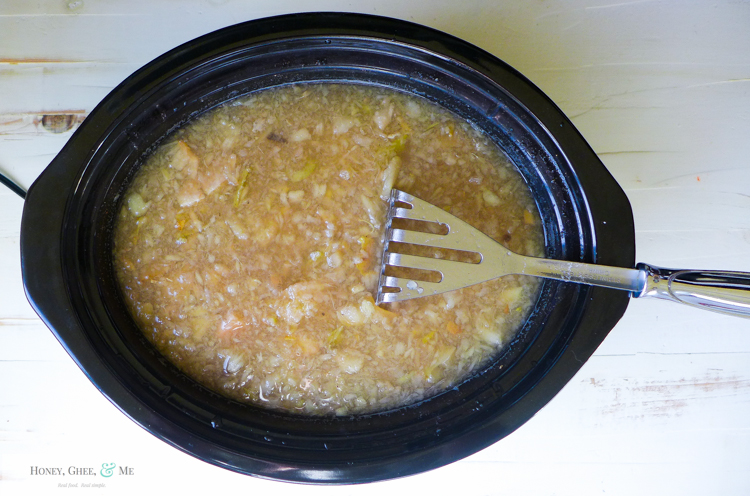 Smash them up a bit too… 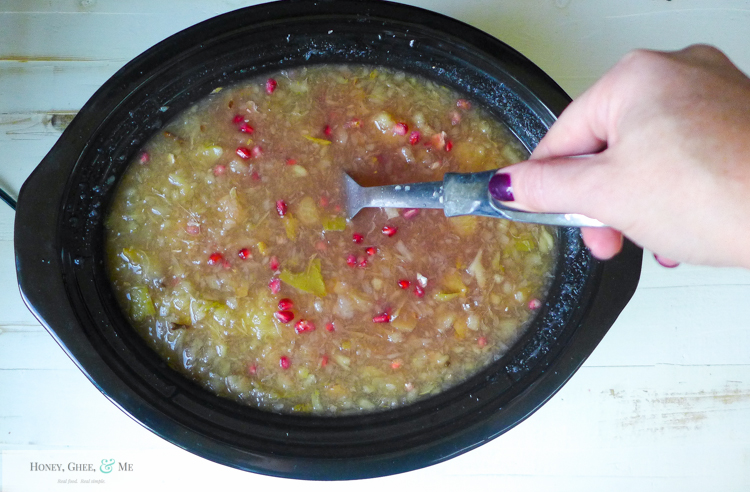 Cook on high for 1 more hour

Give it one more smash to get all the flavor out 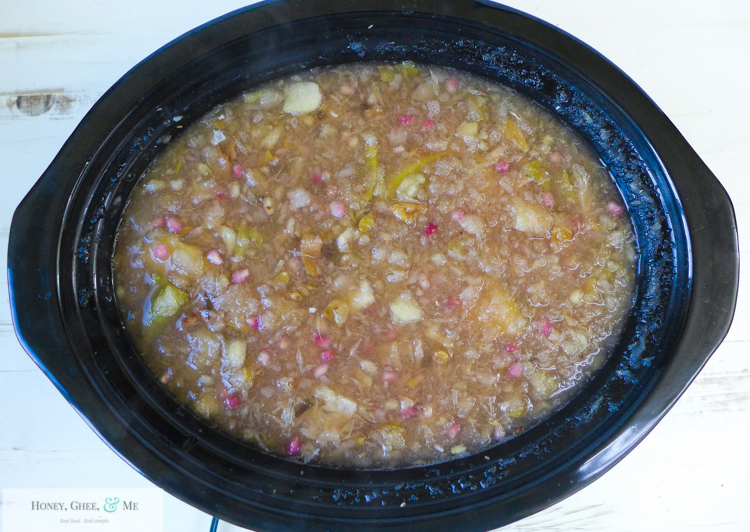 And one last time- you guessed it- smash!

Get as much juice out as you can… 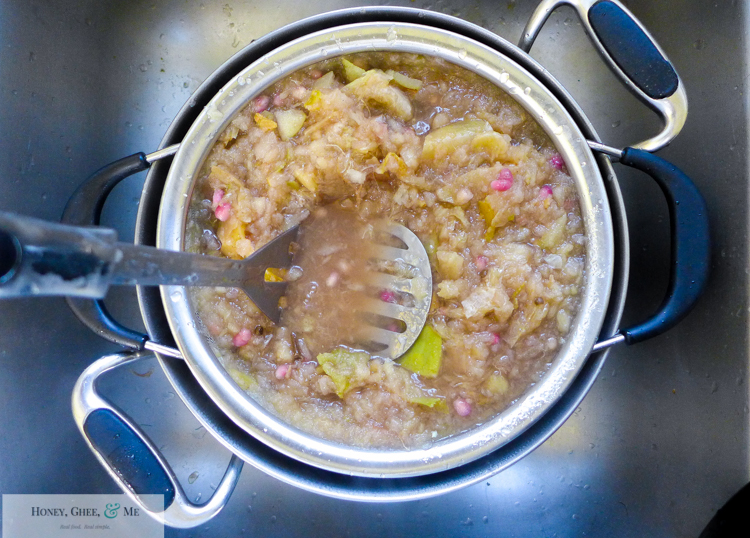 You’ll be left with a heap of mash… I personally toss it, 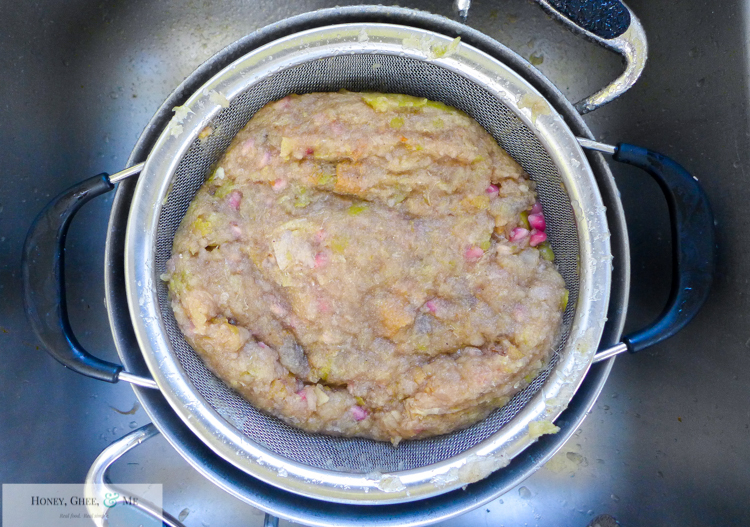 Strain that stuff one more time, just to get all the thick stuff out 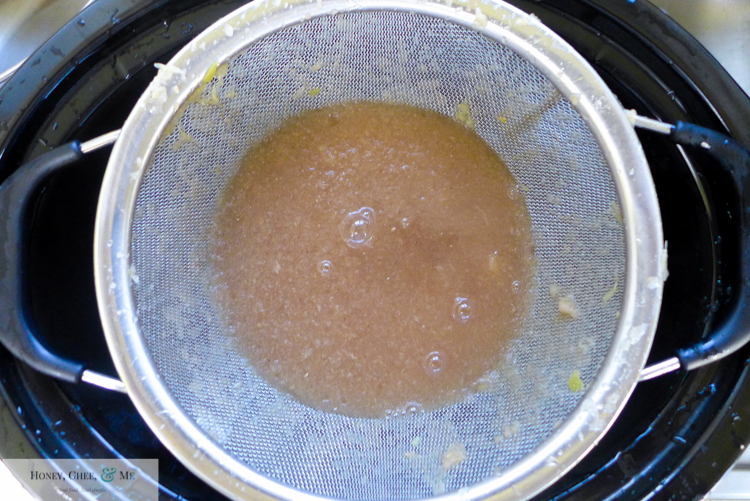 It may surprise you how much is still in there! 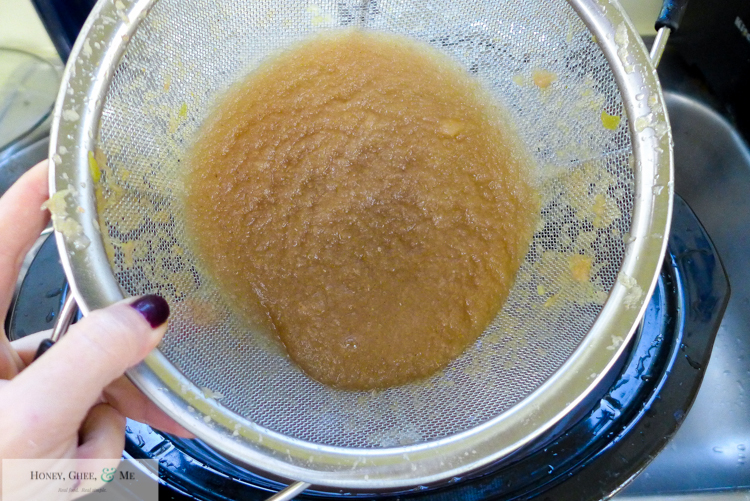 And there you go, done! 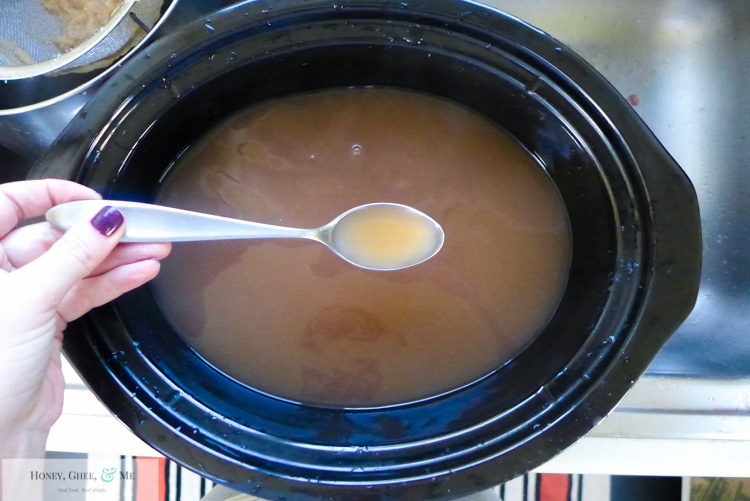 Jar up and enjoy hot, cold, boozy, or just as is! 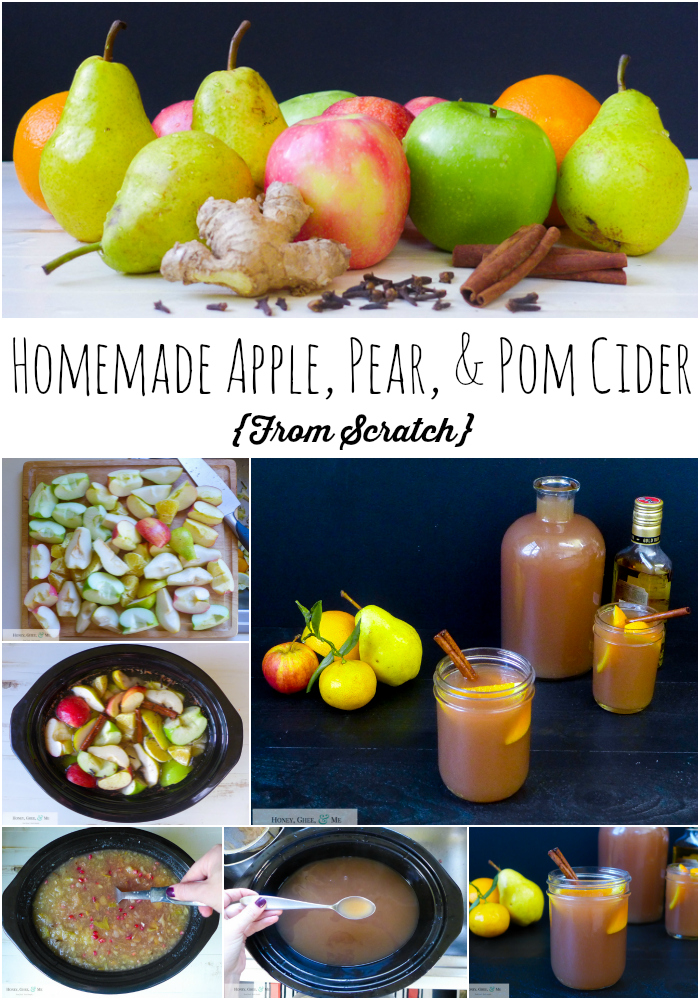