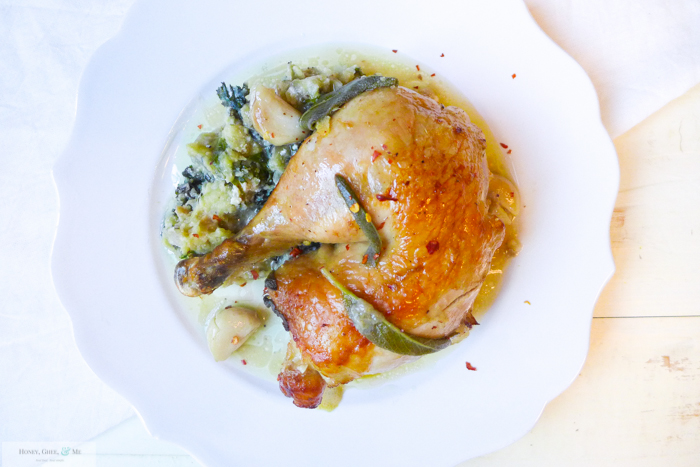 Chances are, you’ve heard of Jamie Oliver’s Milk Chicken at least once or twice.  It’s received quite the attention in the last few years… controversy always does.  Milk and chicken… egh, what?  People either love it or hate it.  (See the original recipe HERE.)

Though truth be told, the ones who dislike it seem to be the ones who’ve never tried it.  They dislike the idea of it, not necessarily it.   Thing is, when milk and lemon mix, things curdle.  Which inherently makes some cringe.  However, this, my friends, is essentially ricotta.  And who doesn’t like ricotta?!  Have you ever needed buttermilk in a recipe and needed a sub?  It’s going to call for lemon or vinegar and milk.  Milk and lemon is a combo used quite often, but for some reason, this recipe has caused quite a stir.

New is weird, and weird is well, ew, weird.  But not to me… and not to the many who have actually tried it.  It’s actually quite tasty.  And hey, new things are fun.

When the milk and chicken cook down with the cinnamon and sage, a flavorful sauce with little pieces of cheese-like remnants is left behind.  Further, the milk makes the chicken incredibly tender… which is exactly why people so often marinate chicken in buttermilk before frying.  People like tender.

All of the above make this recipe a majorly disputed one in the cooking world.  Is it unusual, yes- is it weird, yes- is it delicious, hell yes. 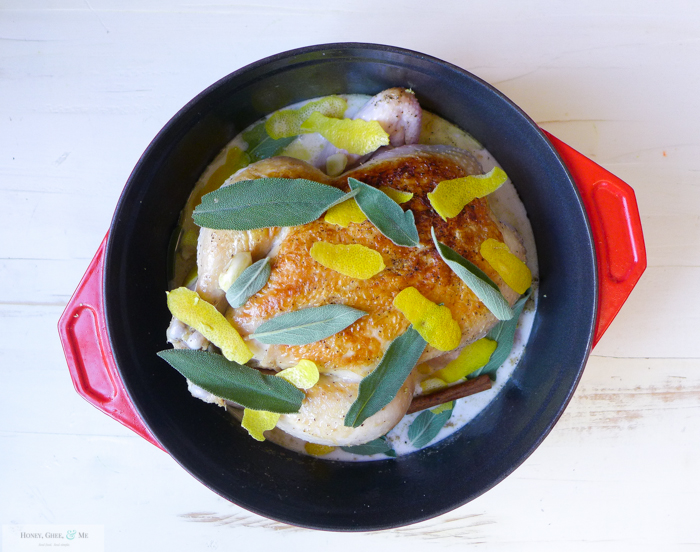 I’ve made milk chicken just as-is a few times now.  From the moment I saw the recipe though, I had the desire to fidget.  It’s my nature.  I can’t follow a recipe as-is for the life of me.  I, to the root of my core, am an experimenter.

I saw the ingredients and wanted so badly to try it with coconut milk.  A Natalie-twist on a Jamie-classic.  I love coconut milk and find myself cooking chicken in it often.  I also love creating recipes that are easily enjoyable for those with gut concerns… and as we all know, dairy is a major one for some.  And the addition of cardamom seemed only natural with sage, cinnamon, and coconut to me.

I was on a mission to recreate.

I knew I ‘d be doing a disservice though if I didn’t at least try the recipe once exactly as is before messing with it.  I owed that to Jamie, and I owed it to the integrity of the recipe itself.

So I did.  Not just once, but two and then three times more… it’s a great simple recipe to make for company.  It’s really so easy, yet feels special too.  I made it at my mom’s for the fam, for my hubs and I, and have made it for friends too.  Cause I mean, lemon, sage milk, and cinnamon… not too tough to get your hands on those few things. 😉 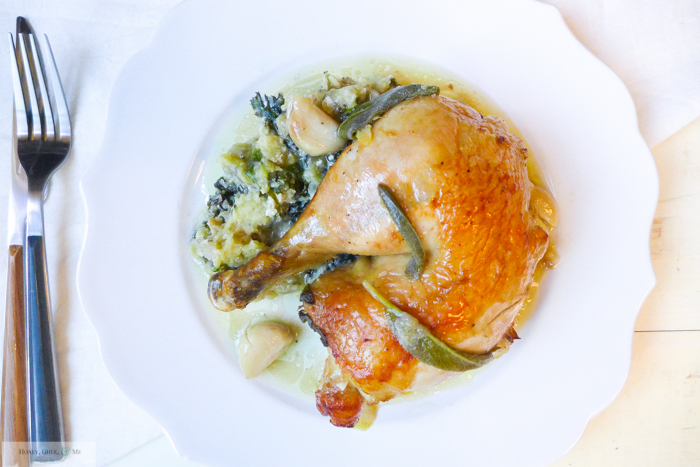 But then, finally, the moment came for me to play.

Coconut milk and cardamom.  Almost all else is the same.

After making the original a few times myself, I learned a couple of tricks to make this guy a tad simpler…

* Leave the garlic whole, but do peel… my guests don’t love having to pick peels out of their meal, and the clove still gets wonderfully soft and tasty

* Peel the lemon into long strips so they’re easy to leave behind- that peel is biiiitter, so make them easy to avoid when you serve it all up

* Rather than taking the chicken out half way through then adding it back in as the original recipes directs, leave it in the pot and add the milk and goodies to it… turns out removing a giant bird and having it perform a few somersaults mid-air is no easy feat 😉

* As shown by Jamie in this old German vid HERE, stuffing the cavity of the bird with some lemon slices and the remaining sage stems adds awesome flavor to the bird while it cooks… this isn’t listed on the recipes online, but watching him in action reveals all the cool tricks 😉 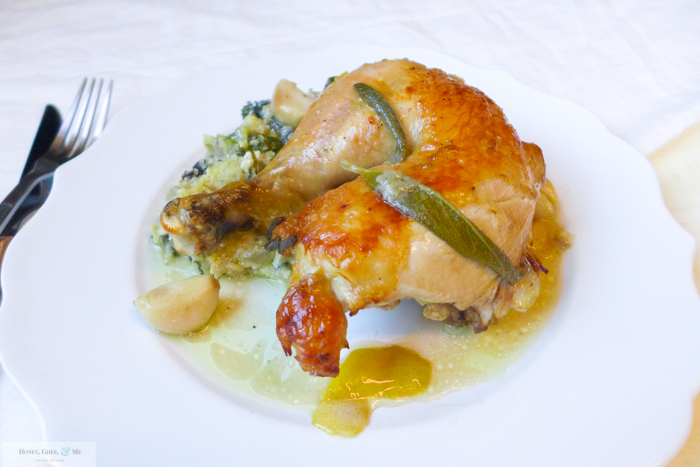 Alright, now you know everything- all the tricks and tips- time to get your hands on a small handful of ingredients and whip this thing up… you’re gonna love it. ♥ 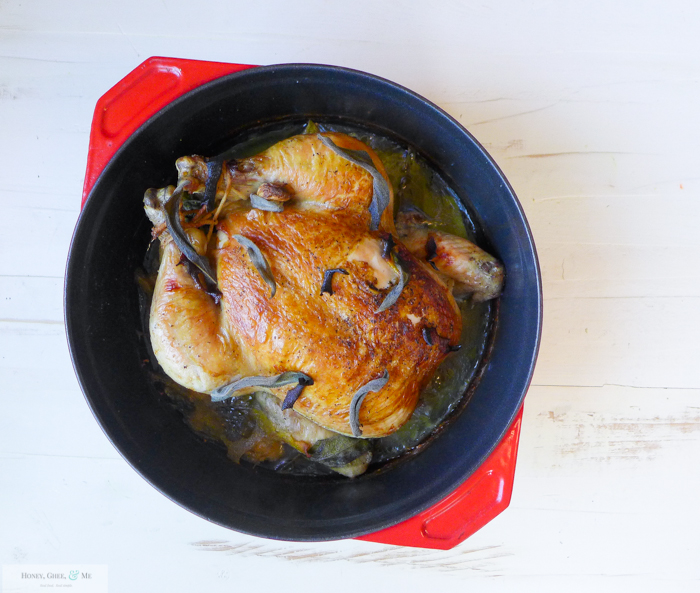 Wondering what to serve this with?  I whipped up some kale mashed potatoes with this last round… sautéed kale and garlic mashed into creamy yellow taters.  So good.  If you’re a dairy-doer, add in some ricotta, if not add in a good drizzle of ghee and coconut milk.  I’ve also served it with roasted sweet potatoes, sautéed greens, rice, and roasted veggies.  The world is your oyster with this one… almost anything goes. ♥ 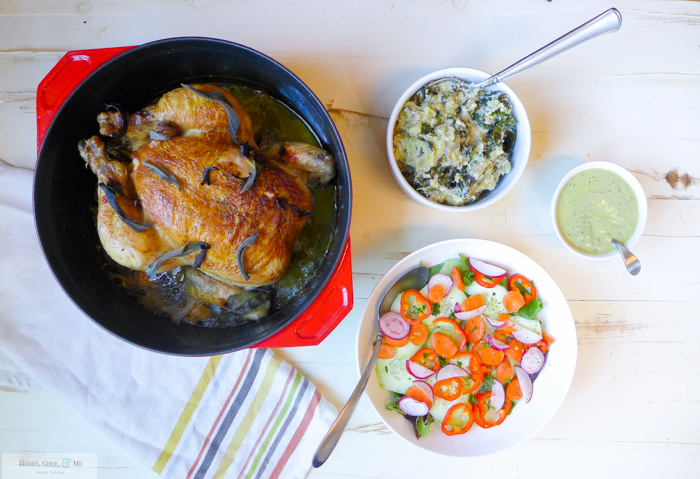 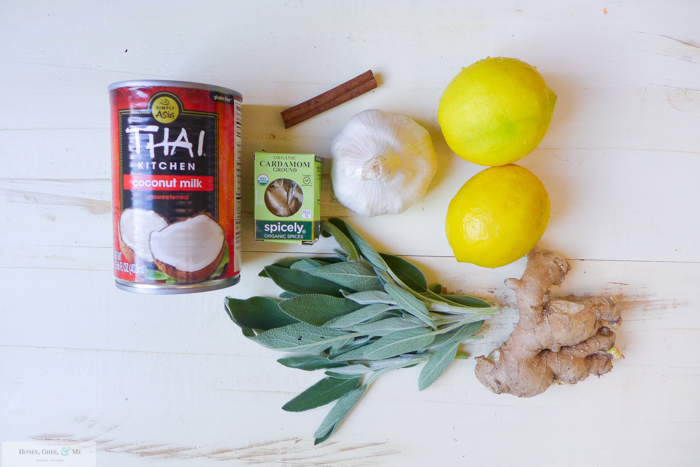 Peel lemon rind into long strands, then slice the lemons into thick rounds 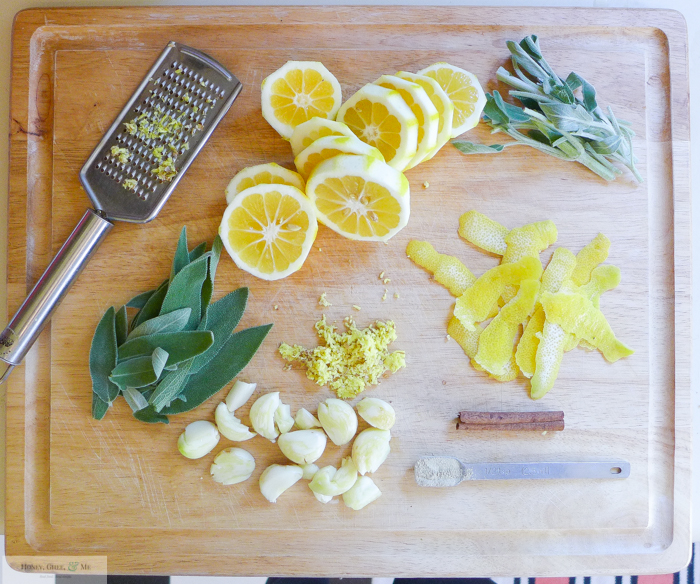 Optional: use twine to tie up the legs… for aesthetics only 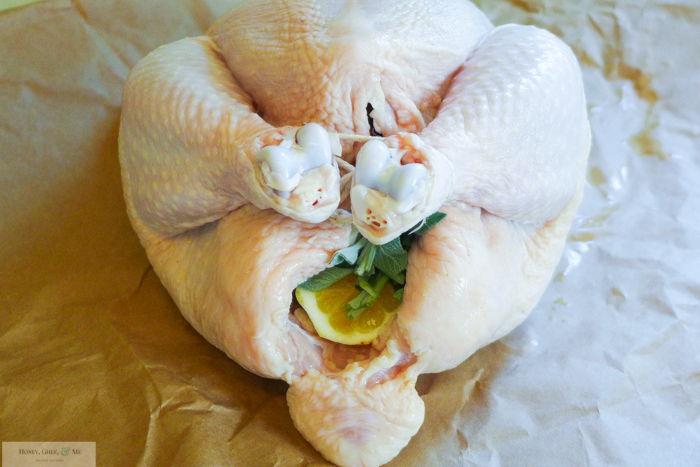 Sprinkle salt and pepper all over the bird 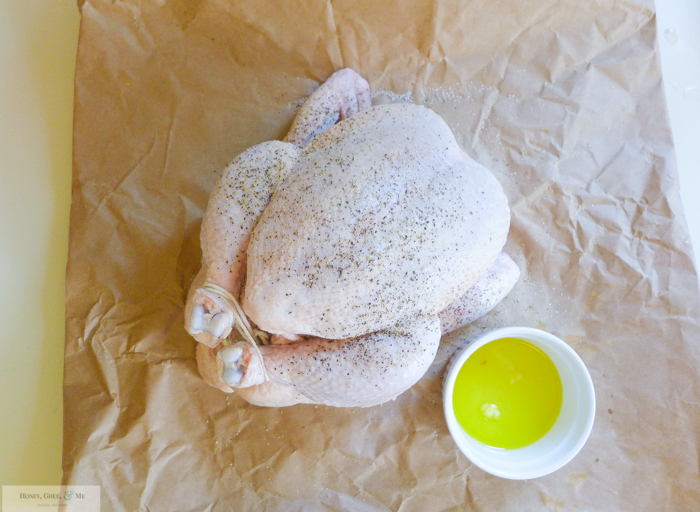 Rub melted ghee over the chicken (olive oil, butter, or a blend all work too) 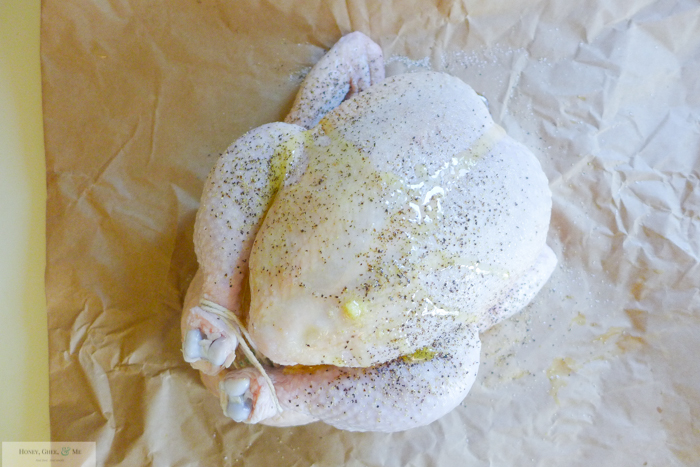 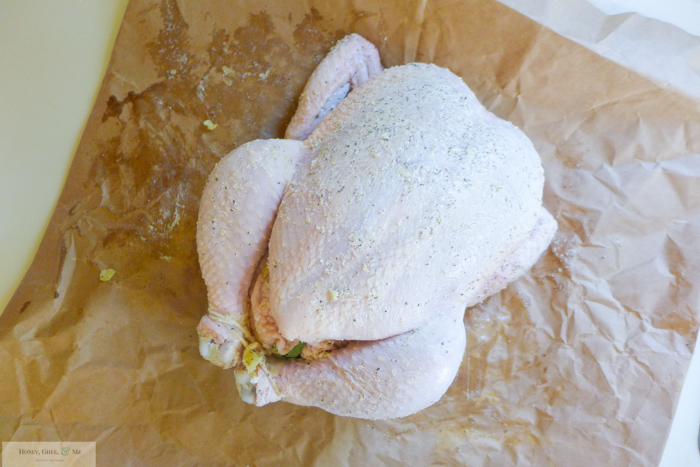 Over a medium-high heat, place the bird breast-side down

Let sit for a few minutes to crisp the skin, then flip 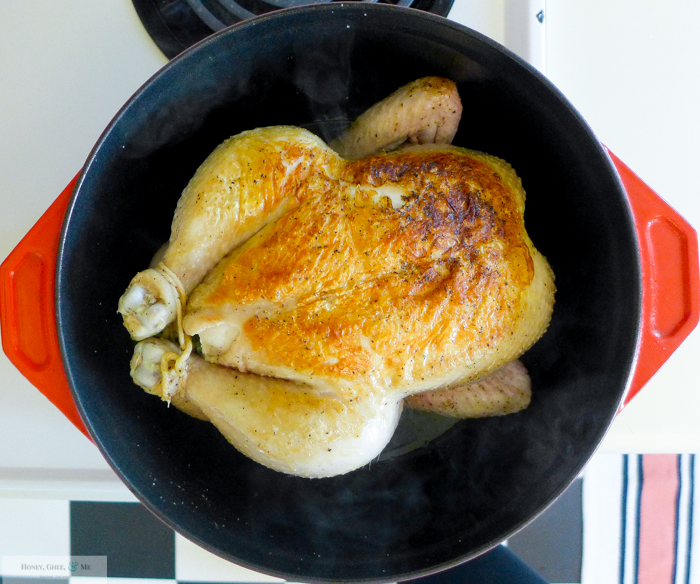 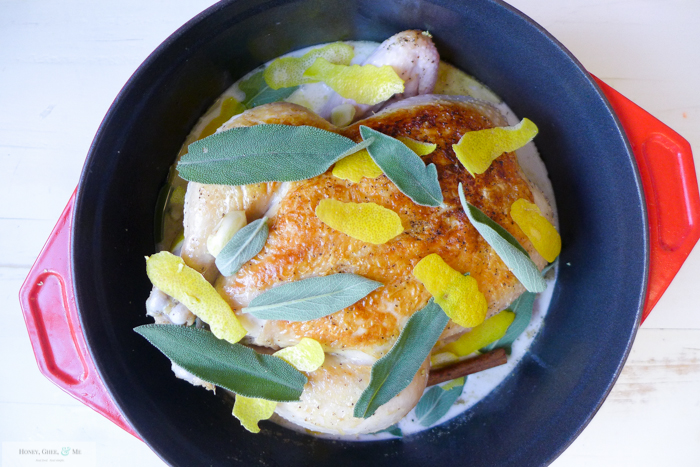 Place in preheated oven, no cover, for approx 90 minutes 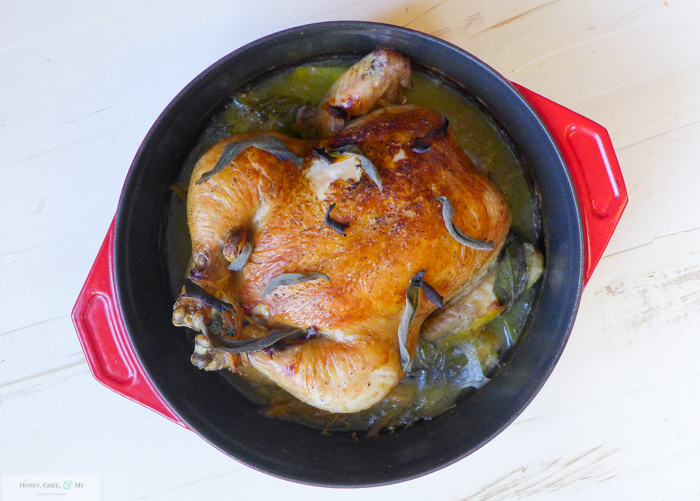 Remove any blackened rind/leaves on top… 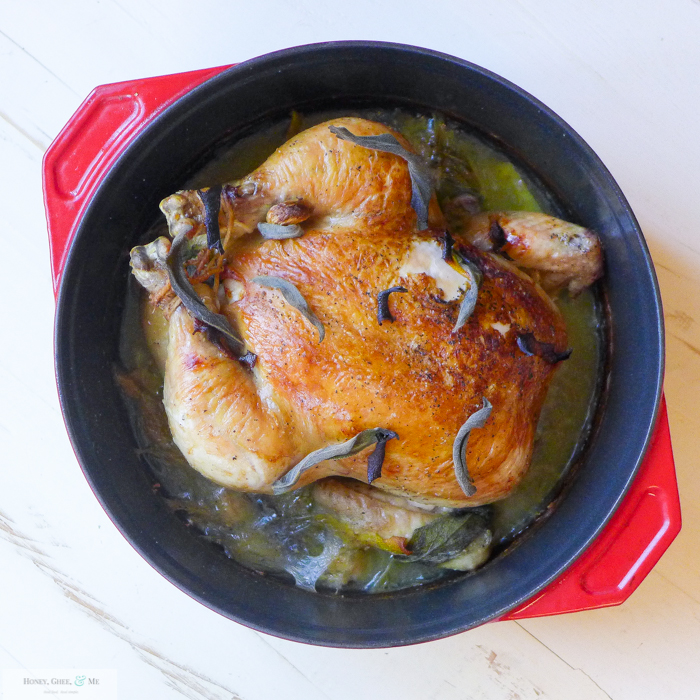 Transfer the chicken to a cutting surface 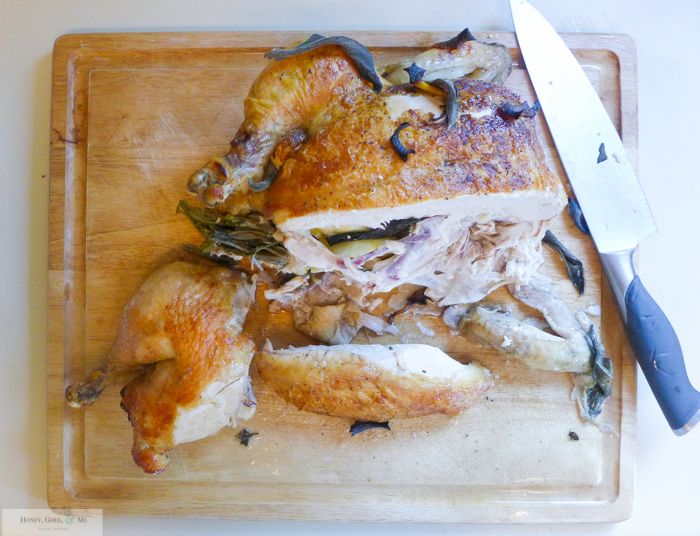 Serve pieces, then scoop some of the sauce over the top…

Get some whole roasted garlic in there,

but don’t serve the lemon rind- it’s job was to flavor, not to be eaten 😉 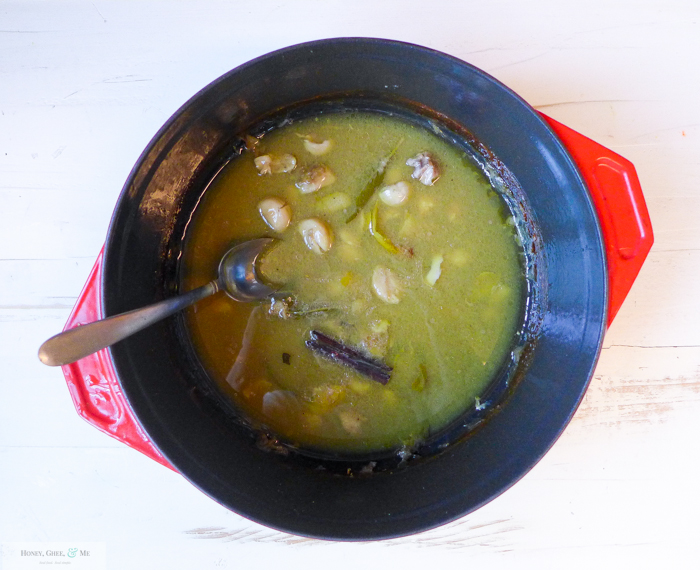 Serve up with your side of choice

(Done with the meat? Save the bones for broth or stock!  See how HERE.) 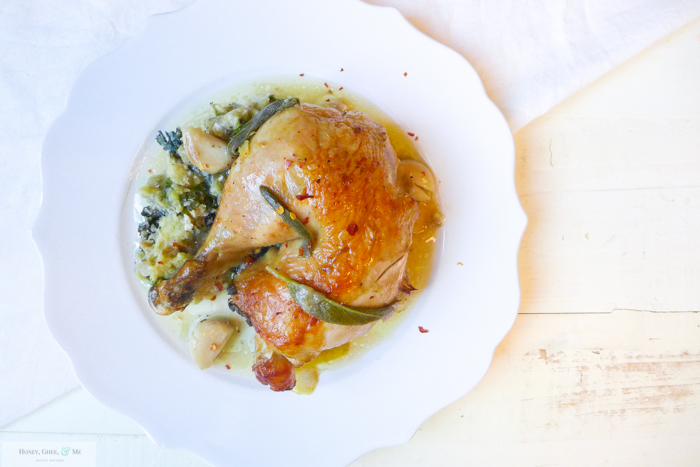 Want to Pin this for another day?  Use this. 🙂 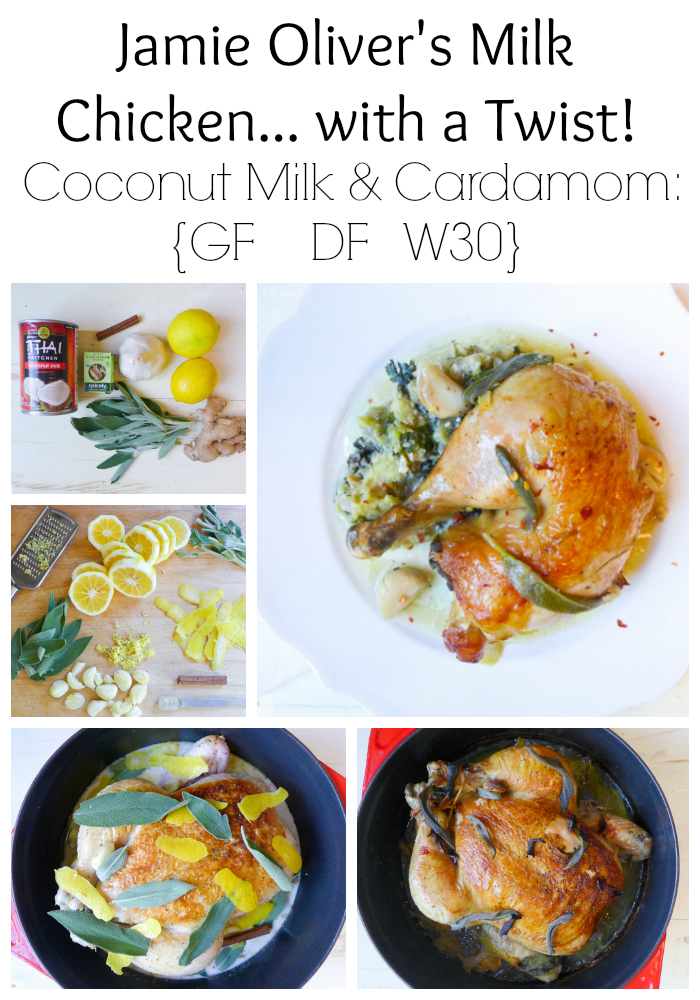 Previous Post: « A Peek at 12 of Favorite Mother’s Day Gifts
Next Post: Face Oils… A Must-Have For All Skin-Types! »